I'm attempting to build a 9kg hex that can drop 6 beers on parachutes to people floating between houseboats on a lake.

I need your ideas: How can I adjust the tuning parameters in-flight to account for the loss of 6 x 400g beers, which is 25% of the AUW? 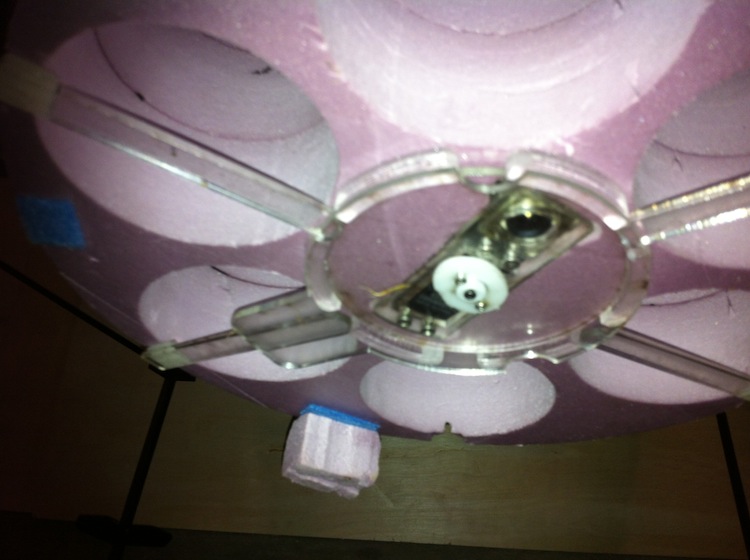 The beers are released by the rotary latch release pictured above. I can mix (copy) this to channel 6 and use the channel to vary something like CH6_RATE_KP along the range of the drops, but this doesn't let me also adjust other valuable params such as stabilization P.Safety is a primary concern, and I won't fly over my floating friends unless it's rock solid. Safety prompted the heavy structure that is now my challenge. I have a large blade guard superstructure that sits on the floats and serves as a frame for a protective net of thin UHMWPE thread.

It's been tough recognizing the right PIDs no matter how many videos I watch of other people tuning, or how much I practice on Jason's PID sim. My thrust-to-weight ratio is 2.0 with four beers; the flight above was with two. I'll skip detailing my design until it's really working, but thanks to everyone for the ideas and inspiration, particularly Robert's offset motor build thread.

I have three days left, so I'm looking for software tuning ideas. I don't have time to reduce the moment of inertia or re-engineer a better frame. I'll leave it at home if it's not ready for safe flight.

Thanks for your help and ideas!