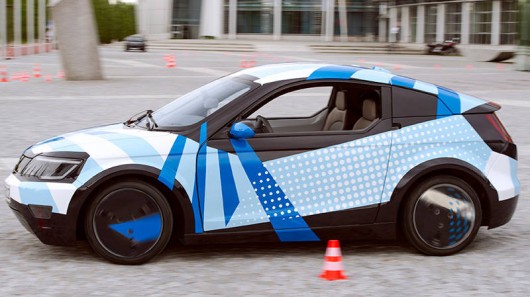 This isn't a drone, but wow: FPV cars, with remote human operators!

Researchers at Germany’s Technische Universität München (TUM) are...developing remote-control cars that could travel along city streets with no one in them at all, their operator located somewhere far away.

First of all, what would be the point of a passenger-less car? As a couple of examples, the scientists suggest that the technology could be used to deliver rental cars or vehicles used in car-sharing programs to members’ homes, plus it could be applied to city-center parking services – you just get out when you reach your downtown destination, and your car proceeds to head off to the parking garage on its own.

So far, the TUM team has equipped a prototype Visio.M electric car with six video cameras, five of which are mounted on the back of the rearview mirror (facing forwards or to the sides) and one of which is looking out the rear window. Together, they provide a 360-degree view of the car’s surroundings.

A live feed from the cameras is transmitted to a remote operator station that resembles a driving simulator, via LTE wireless communication. At that station, three monitors display the front and side views from the car, while a fourth displays the view out the back. Microphones aboard the car provide live Dolby 5.1 audio, while force feedback mechanisms in the station’s steering wheel and brake pedal mirror the forces encountered by the car itself.

Using all this technology, a human operator simply sits at the station and remotely drives the car as if they’re playing a video game. If there’s a break in communications, the car automatically brakes and sits in place until they’re resumed.

The scientists claim that the system isn’t very expensive, and that the LTE networks in many cities are already sufficient to transmit all the required video, audio and control data in real time. They add that slower UMTS networks could also work, as they would produce a transmission lag of less than half a second – which admittedly could still make a huge difference in accident avoidance.

Although issues such as legal liability still need to be addressed, the researchers expect the technology to be in use within five to ten years.