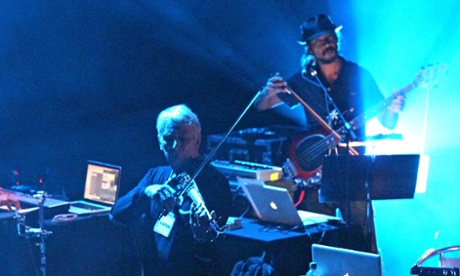 Striped tin cans buzz through the air like android wasps. A cube draped in tube lights – part jellyfish, part Orac from Blake’s 7 – hovers menacingly before the balcony. A cluster of pulsating foam balls swoops past another unidentified floating object wrapped in peacock feathers, and a flying disco light shimmies around to the funkier numbers as if auditioning for Robot Wars Does Strictly. At the peak of the performance, a huge golden peanut shell glides gracefully into a spotlight and hangs there, gleaming like a messiah.

This is the Drone Orchestra, a gaggle of flying bots designed by “speculative architect” Liam Young to swarm around the Barbican theatre during LOOP>>60Hz, his project with John Cale that brings drones out of the realms of sinister terrorist surveillance and Amazon delivery and puts them in front of your face like massive alien gnats. Young believes that drones will become “as ubiquitous as pigeons”‚ delivering pizzas, tracking perps and providing a new background urban whirr; he and Cale, who would once tune his instruments to a refrigerator’s hum to resonate with the frequencies of modern life, make an intriguing fit.

Cale is no stranger to aural drones of course, deploying the week-long one-chord boogie to deafening effect since the mid-60s. His musical experiments have been many and mind-expanding, from rewiring rock’n’roll with the Velvet Underground to avant garde classical works, proto-punk, harrowing electronica and doing arrest-worthy things to a viola. But 60Hz is undoubtedly the most ambitious stage conceit of a man whose idea of a live spectacle in 1977 was decapitating a dead chicken in Croydon.

Initially it’s an unnerving experience. With a safety net in place to protect us from any falling drones, an undulating metallic wall resembling a Terminator’s garage door rises to reveal Cale and his band, summoning a slab of one-note avant-noise on bowed bass, demonic guitar and nosebleed viola. When it splinters into feedback, just as a jellyfish bot ascends ominously from a launch pad beneath the stage, you worry you’re a guinea pig in a field test of some new airborne military prototype, that Cale will end the show in a theatre full of bodies bleeding from the eardrums, pick up a hotline to Area 51 and mutter ‚“It works”.

Once the wasps have buzzed, the peanut has dazzled and the disco bot has funkily flapped its landing gear, however, the drones become a novelty, the sort of gig gimmick Noel Fielding might have dreamed up. They’re billed as “part of the band”, but they don’t audibly add to the music; they’re distractions from the true marvel of Cale’s performance. Swaying along with his eyes to the sky as if in thrall to his robotic overlords, he adapts songs from throughout his career. The atonal funeral elegy If You Were Still Around, from 1982’s tortured lost classic Music for a New Society, is shot through with samples of rattling trains. It’s followed by the skewed new wave and space funk of his post-millennial material.