A lot of people have contacted me for more pics, so I thought I would throw up some more. I will give some minimal content with them. If you have any questions, fire away and I will answer in the comments.

The first iteration of controller and Pixhawk. At the time I thought The Pi would be too big and draw too much power. Power was ok, but definitely too big. 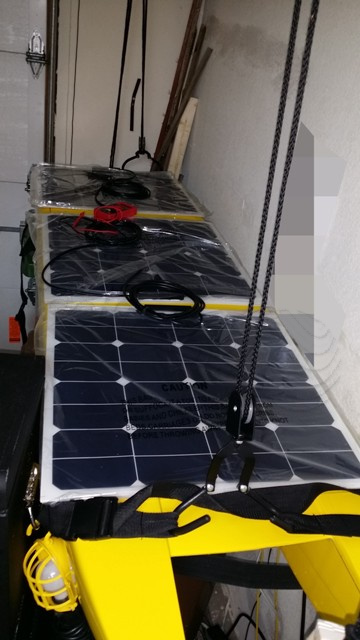 When I got the hull from Radtek, I originally planned to use three 50 watt solar panels since I could not find a 150 watt panel that was narrow enough to fit on top. The width of the hull is 21". The length is 92" I also planned to use the push pull system for the rudder. I quickly found out that even a heavy duty servo could not tolerate a week pushing water back and forth in my torture test bucket.

This caused me to rethink and redesign the rudder system. I eventually went with a thru-hull rudder system. This is a typical powerboat brass rudder port mounted on top of a 1/4" carbon fiber plate. On the bottom of the hull is a 1/4" ABS plastic plate. With weight ever increasing, I went with a kayak rudder and an 1" diameter aluminum rudder shaft. 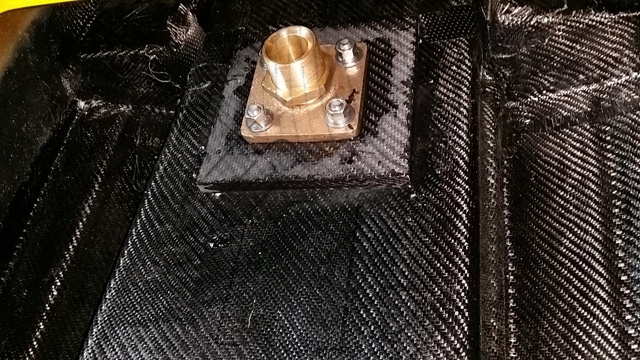 After weeks breadboarding everything and testing, the final control system looked something like this. As you can see from the picture I moved from the servo rudder control to a linear servo. This one has 135 lbs of thrust and handled the bucket challenge with no problems. 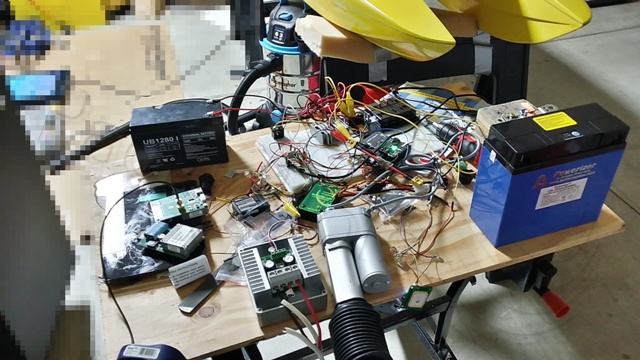 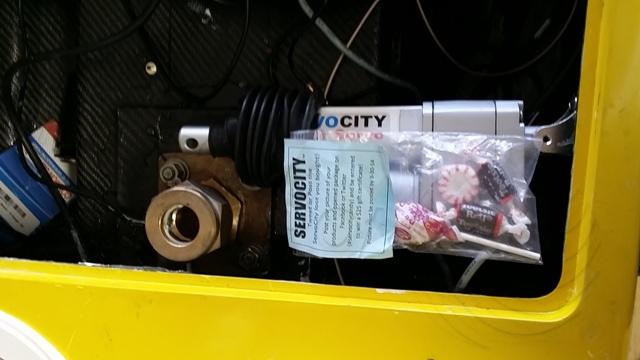 The servo installed in the hull. I was very fortunate that the servo lined up almost perfectly with the rudder aperture. This is the only pic I could find of the servo so the candy obscures part of it. 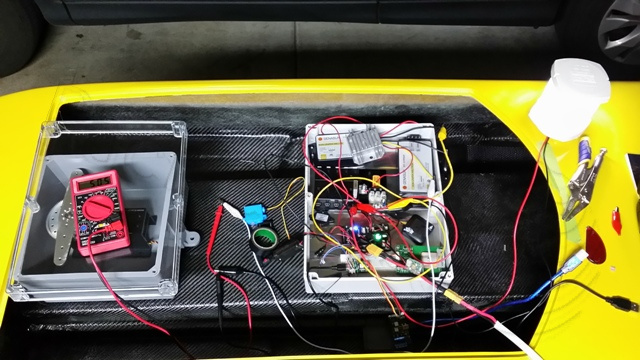 Once all the systems were figured out, the challenge became how to fit them into a small enough water tight container. This caused a lot of grief.  This is a first attempt. 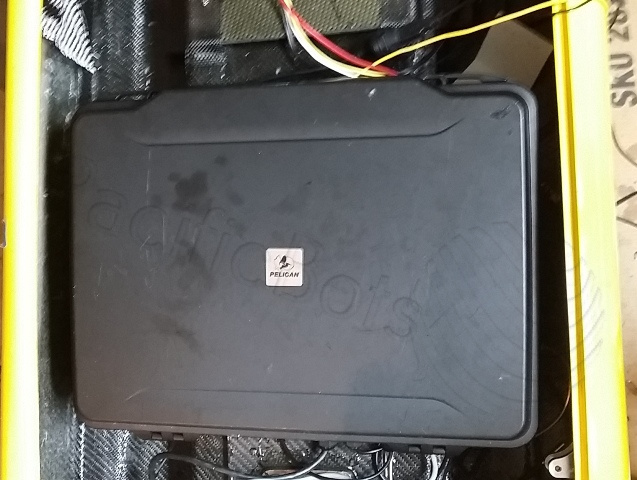 Finally I found the perfect waterproof container for the electronics 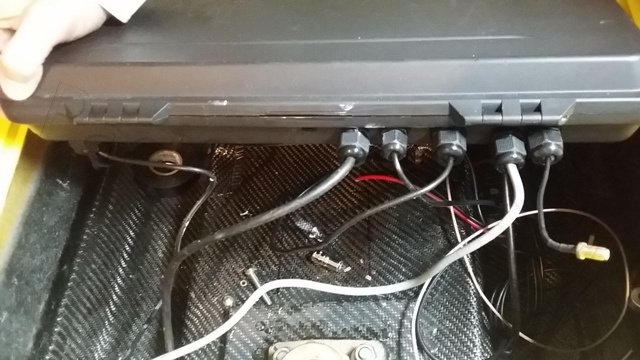 At the back are the waterproof ports for most of the electronics. The exposed sma connector attaches to the Satellite antenna. In all I drilled about 15 holes in the case for cabling. 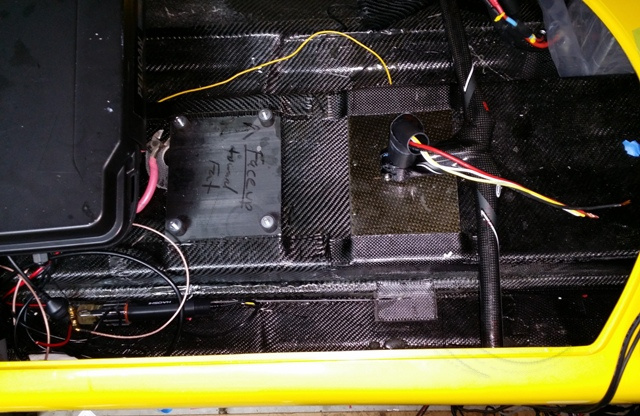 Expecting that the ocean will batter the crap out of this, I mounted a carbon fiber plate to the the hull and bolted the electronics to the hull via vibration mounts. These mounts will keep the electronics about an inch off the hull. Hopefully the vibration will be significantly reduced. 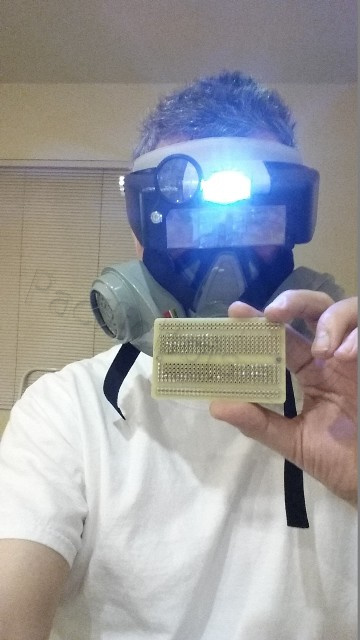 Juggling family and a full time job meant that everything was done from 8pm till the wee hours of the morning, hence this taking a year (and counting). Soldering success at 3am. I had blown through 4 boards before this one by letting the solder touch and failing to clear it properly before plugging the controller board into a power source. 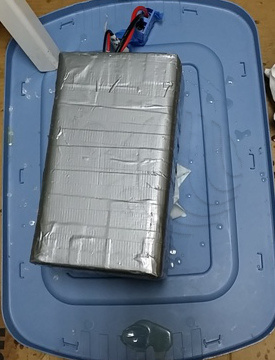 I went with a 100AH battery after figuring in the power requirements. Just running the electronics 24/7 added up quickly not to mention powering the motor and the rudder. Since this platform is designed to drift with the current and monitor the ocean/air once it reaches a certain point, there will not be a constant high load demand on the battery. Getting to its destination is another power story entirely. lol...

I wanted to be able to stay on-station for many days even in the event of a lack of sunshine. A 100ah LIFePO4 battery weighs about 26lbs. You can see the battery installed in the hull in my previous post. Once the battery was in, I then had to wire up to the charge controller and also wire up a secondary chrage port so the battery could stay charged while inside. At one point I had wires coming out of all parts of the boat. The usb ports for talking to the pixhawk and other devices are in the shot as well

That's all for now. If you have any questions, let me know.

I should have some more photos up at