Working for one of the UN Agriculture agencies in Rome, I thought this was worth sharing! 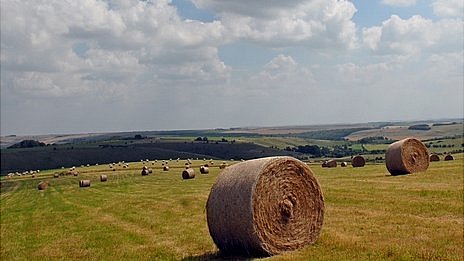 Farmers who claim more EU subsidies than they should, or who break Common Agricultural Policy rules, are now more likely to be caught out by a camera in the sky than an inspector calling with a clipboard. How do they feel about being watched from above?

Imagine a perfect walk in the country, a few years from now - tranquillity, clean air, birdsong in the trees and hedgerows, growing crops swaying in the breeze.

But there is no-one around manipulating radio controls. This is not a toy, but a drone on a photographic mission.

Meanwhile, hundreds of kilometres up in space, the same patch of land is being photographed by a satellite, which clearly pinpoints individual trees and animals.

What is there to spy on here? No secret military installations, just farmland.

But Europe's farms cost taxpayers billions of euros in subsidies each year, and EU agricultural inspectors are turning to technology to improve their patchy record on preventing fraud and waste.

Satellites have already been in use for several years, and drones are currently undergoing trials.

Scanning a farm with a satellite costs about one third as much as sending an inspector on a field visit - £115 ($180; 150 euros) rather than £310 ($490; 400 euros), says the UK's Rural Payments Agency (RPA), which is responsible for disbursing the subsidies in the UK and checking for irregularities.

"The RPA follows up only on those claims where there is some doubt about accuracy, and then only at the specific fields for which the doubt exists," the RPA says. "This saves time, lifts the burden on farmers and reduces cost to the taxpayer."

Satellites can rapidly cover a huge area in detail and quickly return to photograph it again if necessary.

But they are not infallible. Austria does not use them, on the grounds that the shadows cast by very mountainous terrain sometimes make satellite images inaccurate.

And Scotland, unlike the rest of the UK, decided against satellites "because of the difficulty of getting enough clear weather for flyovers", a Scottish government spokeswoman told the BBC.

Many things in the countryside are constantly changing and when the satellite passes over, "the animals may be in a field or in a barn - you can't count the numbers very well", says Roland Randall, an English farmer and environmental researcher in Cambridgeshire.

"When planners looked at the aerial photo records of our farm they thought we had an additional building without permission, but it was actually a haystack," he told the BBC.

The satellite checks are done partly to produce accurate maps of farms, showing clearly the areas eligible for subsidies.

But farmers these days have to keep their land in "good agricultural and environmental condition" to qualify for subsidies, so images also reveal whether the farmer is complying with the rules on hedges and ponds, say, or buffer strips around arable fields.

The monitoring is not always to spot infringements or illegal activities. Satellite images can help identify problems such as erosion. Farmers can then be asked to change their methods to prevent further damage. In the above images, overproduction and deep ploughing in clay earth meant rain washed soil away.

A farmer who breaks the rules risks losing 3% of his or her direct payment - and more if it is a repeat infringement.

There have been few prosecutions in the UK based on satellite evidence, says Ray Purdy, a senior law researcher at University College London (UCL) specialising in satellite monitoring.

One case in the UK was dropped in 2001 because a farmer proved that he had planted a linseed crop, even though the satellite image appeared to show bare earth. The sparse young plants had failed to show up against the bright reflection off chalk downland.

This could be the kind of situation where a drone - an Unmanned Aerial Vehicle (UAV) - would come in useful.

Drones are best known for their role as remote-control killers in Afghanistan, but supporters see a role for smaller and much simpler drones in agricultural monitoring. They can get up close and take sharp photographs - and unlike satellites, which always look directly down, drones can get an angled view of their subject.

They are currently being tried out in vineyards in the south of France, to check that "grubbing up" of vines is done legally and ecologically.

"There has to be 100% control, as it's a huge amount of money," says Philippe Loudjani, an agronomist at the Joint Research Centre, the European Commission's main satellite monitoring hub in Ispra, northern Italy.

"The French are testing to see if the drones need to go up to 10cm resolution - to see what accuracy is required."

Drones are also being tested in Italy, and are already in use on a small scale in Spain's Catalonia region, where authorities say their 25cm and 12.5cm resolution photos are ideal for inspecting the small landholdings with mixed crops that are typical of the Mediterranean.

The EU is hurrying to develop a "strategy for Unmanned Aircraft Systems", which would see the existing very tough restrictions on the use of civilian drones in Europe relaxed.

A discussion paper prepared for a European Commission workshop in Brussels this week, envisages their use not only in crop or farm monitoring, but also terrain cartography, goods transport, monitoring of borders, the fight against illegal immigration and drug trafficking, and intervention in natural or industrial disasters.

"They can also be sent to deliver rescue packages to ship crews in danger at sea," it adds.

However, in the short term it's likely that UAVs will only be widely approved for use within line of sight of an operator and at a distance of no more than 500m, which limits their value for agricultural inspection.

Ben Hayes of the campaign group Statewatch worries that Europe is rushing into the use of drones without sufficient public discussion.

"We would accept the argument that there are lots of things they can be useful for, but ... the questions about what is acceptable and how people feel about drones hovering over their farmland or their demonstration - these debates are not taking place," he says.

Ray Purdy of UCL surveyed 202 farmers in the UK, and 428 in Australia - where satellites are routinely used to monitor land use, especially vegetation clearance - and found that only about a quarter in Australia and a third in the UK were against satellite monitoring.

Some farmers voiced concerns about invasion of privacy, but many said remote sensing was preferable to inspectors on their land taking up their time.

A majority in the UK also agreed that the satellites would help to deter fraud.

Rob Allan, a farmer in Warwickshire, said "it's modern life really - I don't think there's anything you can do about it".