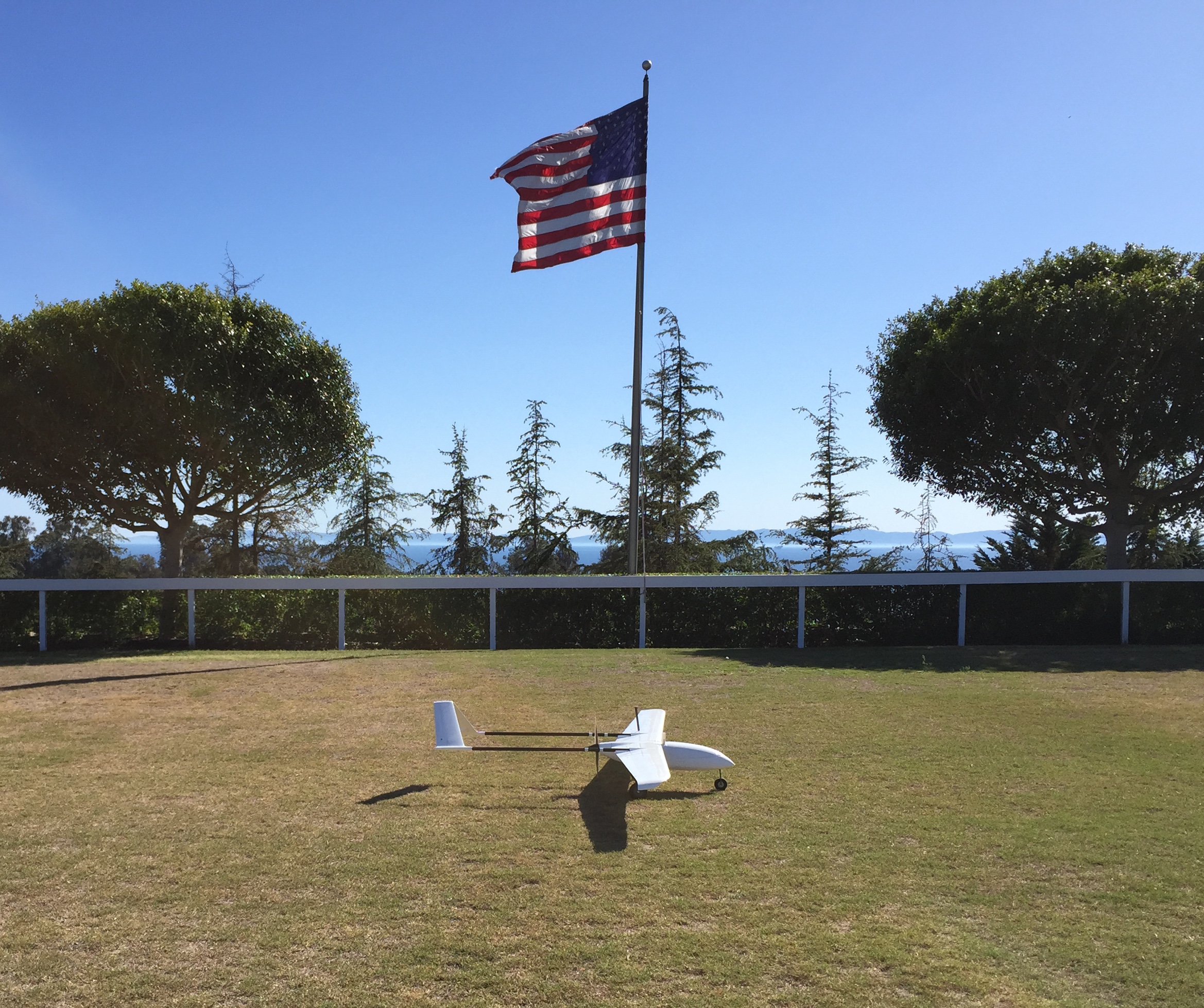 First and foremost, we need to take a moment to acknowledge the fact that we are here because of you. Plain and simple. We love being a part of this community and have been working tirelessly to make the Albatross a reality for you.

Now that it’s almost there, we thought we would show everyone not only what we are releasing, but also what it took to get here. We have battle tested everything and will start taking orders next week.

It’s this community that drove us to make this happen and we are forever thankful for your support, understanding and continued patience. 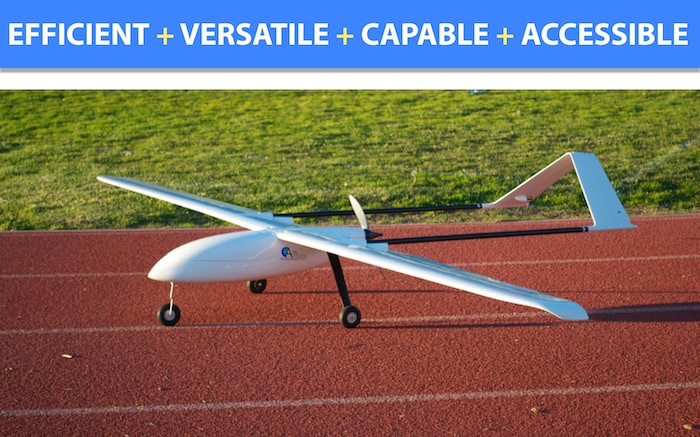 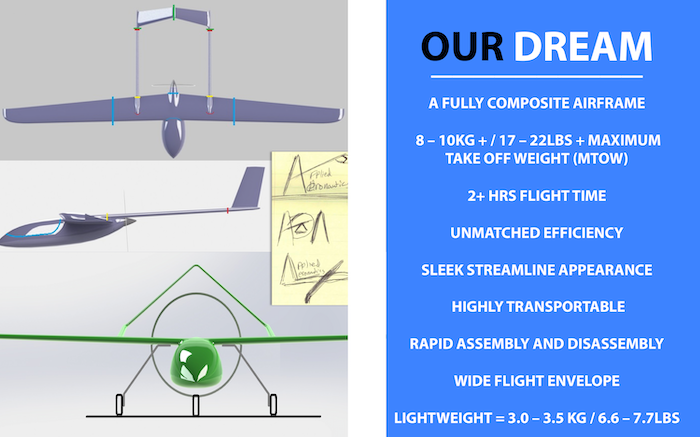 We designed the Albatross UAV to be the most efficient of its kind. That means low stall speeds, high max efficiency, a large cruise window and payload capacity, self cooling fuselage, built in component bays and an entirely electric propulsion system. This equates to less energy expended and more time in the air.

Our transformative design allows for dynamic use, making each Albatross truly unique. You can use the Albatross for: search and rescue missions, inspections of pipelines, photography, filmmaking, thermal mapping, 3D terrain mapping, precision agriculture, surveillance, reconnaissance,  humanitarian aid, fun and much, much more!

We are committed to integrating efficient design with modern technology in a robust, entirely composite platform. The Albatross is nearly silent, can fly for over 2 hrs, reach speeds of up to 90 MPH and travel for over 100 miles. By upgrading your base airframe to one of our packages you can fly autonomously, capture stunning HD photos and video, complete aerial surveys, monitor crop health, wirelessly transmit live video and increase accuracy with an onboard liar system.

We seek to create solutions that are affordable, efficient and of superior quality. We refuse to accept that affordable means inferior and well built means unattainable. We create professional grade tools at hobby prices. 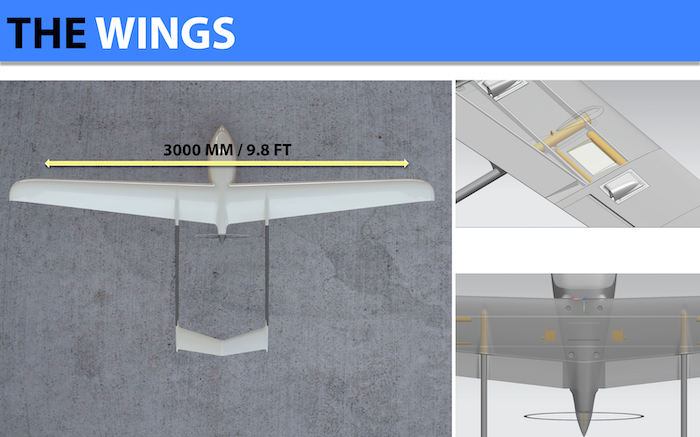 The wing consists of an optimized foil and a forward swept planform designed to ensure low stall speeds, high max efficiency and a large cruise window. This design also reduces the chance of tip stalling on approach.

The Albatross wing has a high aspect ratio of 13.6. Although possible to go with a higher aspect ratio, we chose not to. By maintaining our aspect ratio at 13.6, it allows our custom in house foil selection to be tailored for a wider flight envelope. It also allows us to remain within our 3m size constraint, while maintaining adequate wing area.

The wing has two built in component bays allowing for adequate separation of receivers, transmitters and GPS units.

Finally, the drooped wing tips are designed to reduce drag via the reduction of tip vortices, as well as increase aileron effectiveness at near-stall conditions. 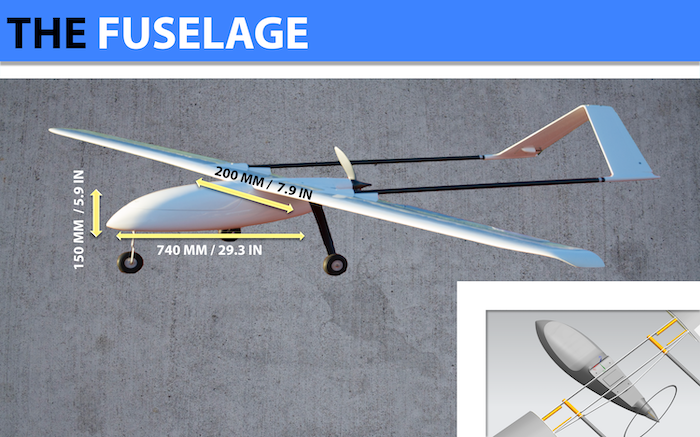 Our fuselage has a massive amount of usable space. No matter how you want to use the Albatross, the device will never stand in the way of your creativity. 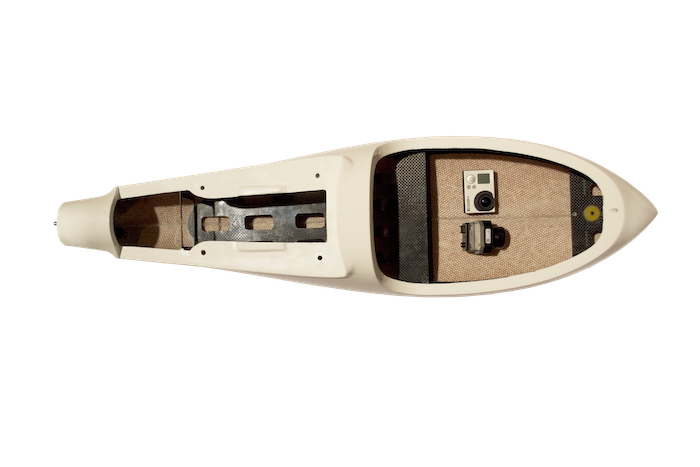 The fuselage was built in a slight trapezoidal shape to minimize fuselage/wing intersection, drag and interference.

It was also designed to be efficient in cooling. It was designed with a high pressure region in the nose and a low pressure region behind the wing, on top and below the motor mounting area. This acts to create a pressure differential, essentially "pulling" air through the fuselage. The layout allows for smarter cooling, by cooling off lower temperature components towards the front, and higher temperature components in the rear (motor). The cooling exhaust placement was purposely in an area with turbulent airflow, so as to not disturb the otherwise laminar airflow over the rest of the fuselage. Through boundary layer visualization-oil tests, we were pleased to see that under the correct circumstances, we maintain laminar flow over more than 80% of the fuselage. It will be required for the end user to cut their own cooling inlets and exhaust, so they can tailor their cooling requirements for their payload/motor options. 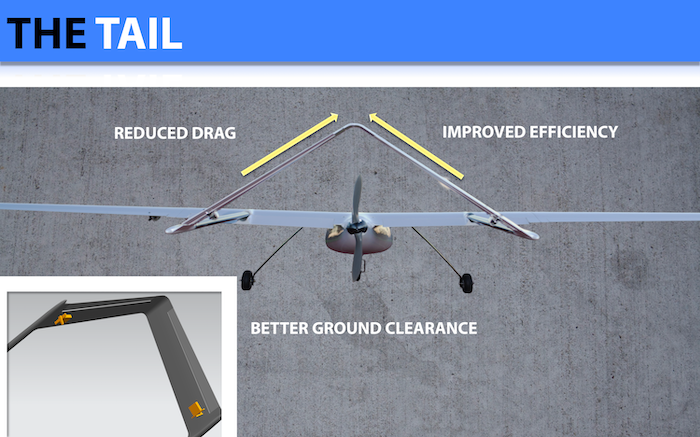 The tail is an inverted V, which improves efficiency while decreasing drag. This V shape is also naturally more stable in banked and coordinated turns.

Finally, it allows for a twin tail boom design and large diameter prop, while also raising ground clearance of the tail on landing and takeoff. 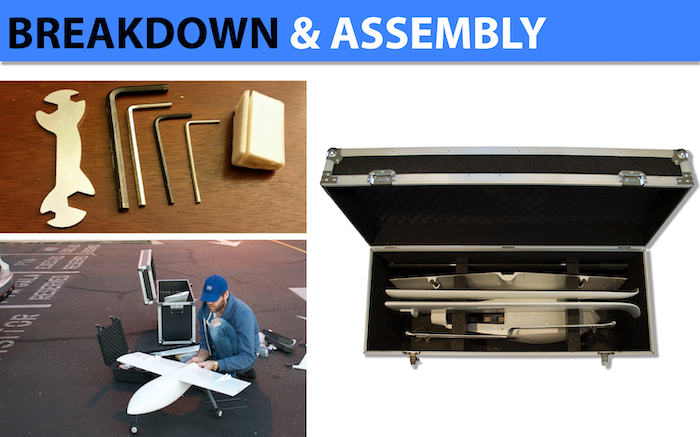 The number one reason for keeping airframes small is due to transportation and storage. The Albatross UAV is designed to be easily taken apart and stored. Not only does this make things easier for the end user, but it also reduces shipping costs door to door. 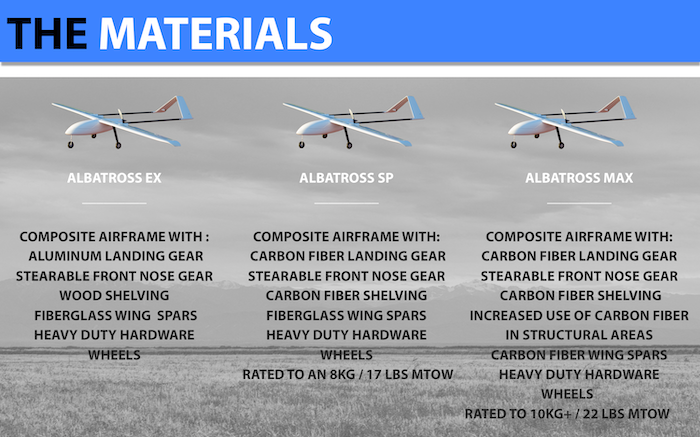 Our Albatross packages take the leg work out of selecting the best possible components for your airframe. Every package we will offer is made up of products we've built, designed, and/or tested first hand. We only supply genuine top quality components made by the industries leading companies with our Albatross UAV.

The Albatross was built to support: 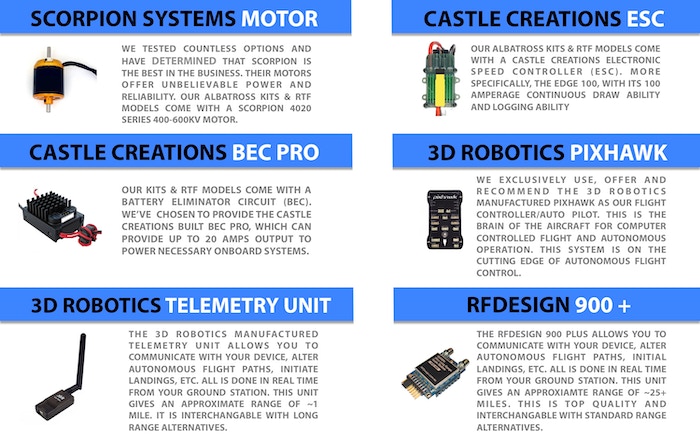 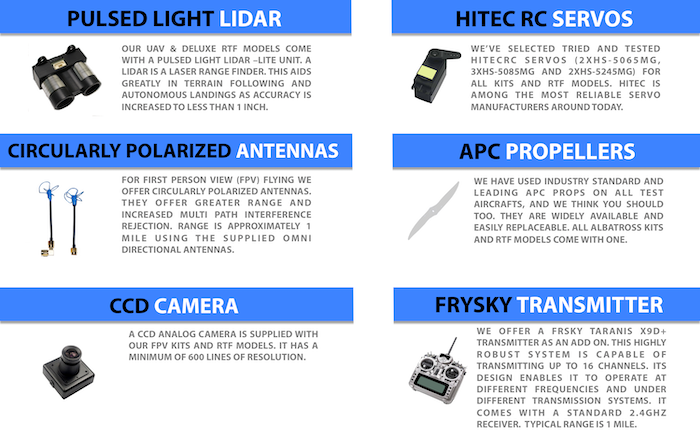 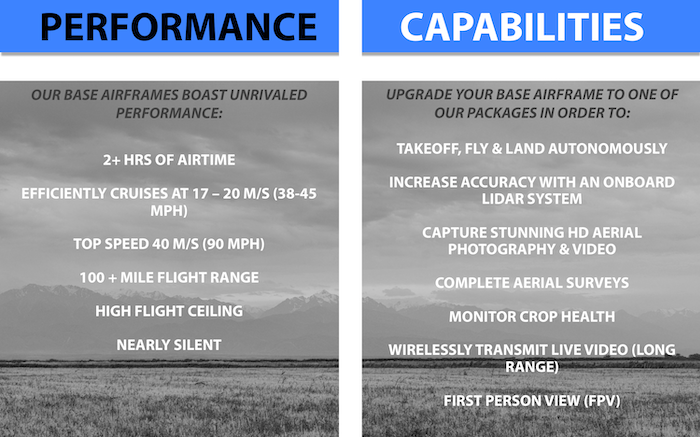 The Albatross is a UAV in all aspects of the word. By upgrading our preferred base airframe to one of our kits or RTF models, it can takeoff, fly and land autonomously via predefined flight paths. It can survey property, take extremely high quality photos and video. It can complete long distance and duration surveys, inspect property and assets. It can assist fire fighters with onboard thermal cameras. The possibilities are endless.

It's important to note that agriculture is a huge interest of ours. This is primarily because we are certain that our platform has the ability to dramatically simplify the lives of farmers saving them time and money. By monitoring the health of crops in real time with the Albatross, you can assess changes based on growing techniques on a daily or weekly basis. This is all data that can be collected continuously and easily with the aid of an onboard NDVI camera.

We are committed to marrying this versatility with superior performance. We were determined to create an airplane that could travel for substantial amounts of time at useful speeds. If it was too fast, the data collected would become useless (blurred, inaccurate). If it was too slow, the distance covered would be insignificant. A useful cruise speed and window were a necessity. This is where careful design, planning and testing played a critical role. What we ended up with was an aircraft that can cruise efficiently at 17-20 m/s (38-45 MPH) with a top speed approaching 40 m/s (90 MPH). 2 hours of airtime is easily attainable at these speeds. With fine-tuning we anticipate that this number will grow substantially.

Finally, The Albatross is nearly silent. Yes, it’s an electric plane which helps tremendously, but with the low RPM motor coupled to a high pitch prop, and little to no turbulent air noise (often a result of draggy airframes), it doesn’t take much before you can’t hear it at all. 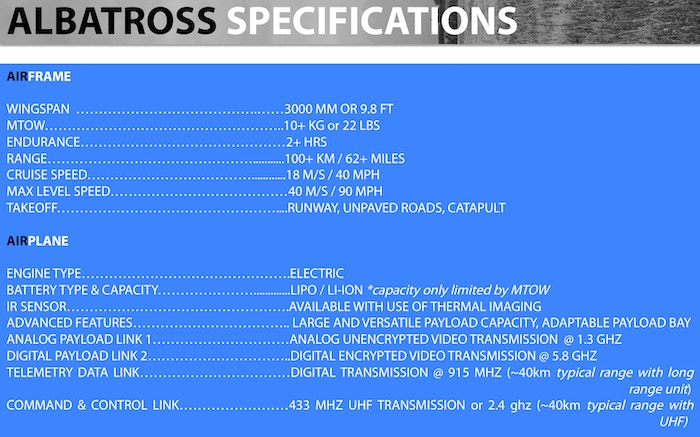 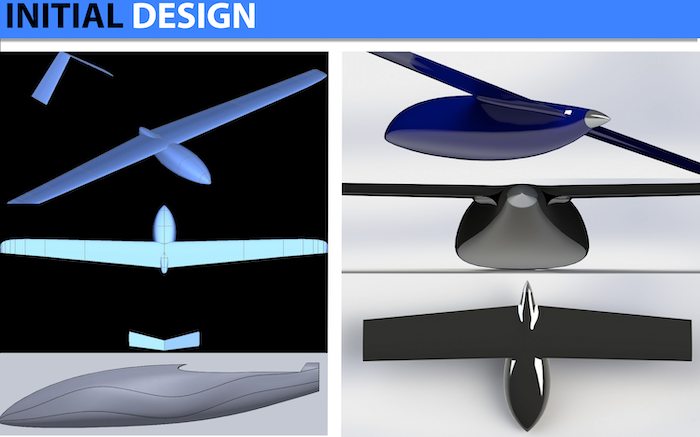 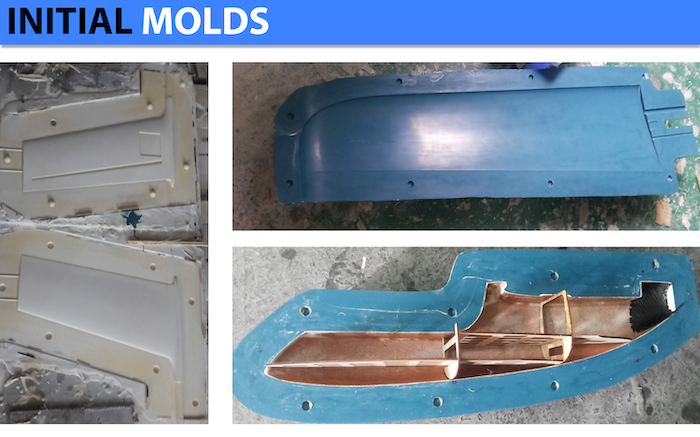 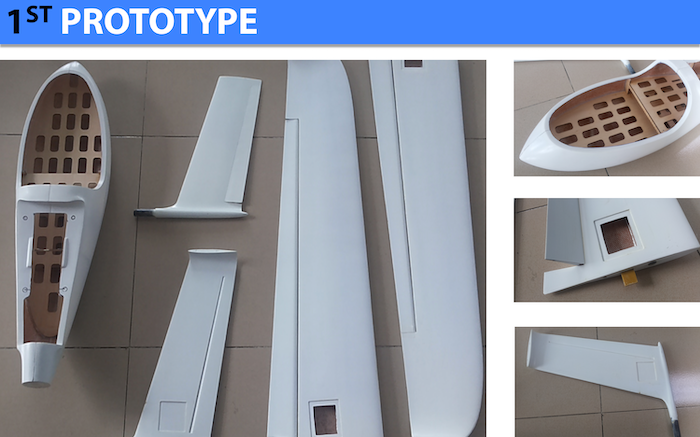 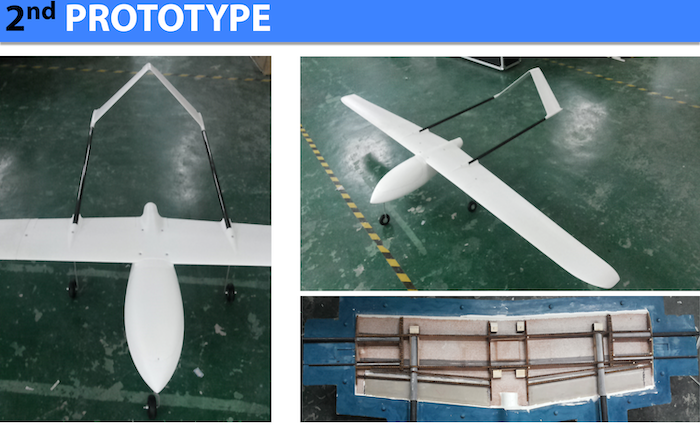 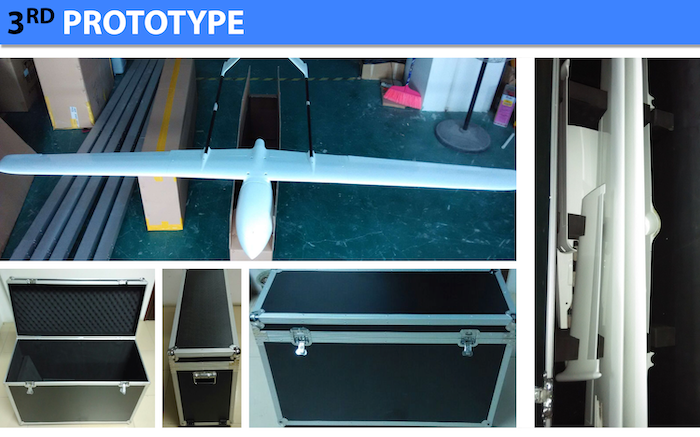 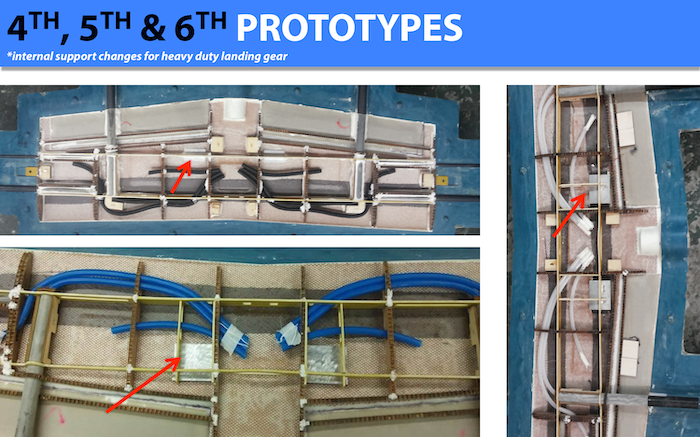 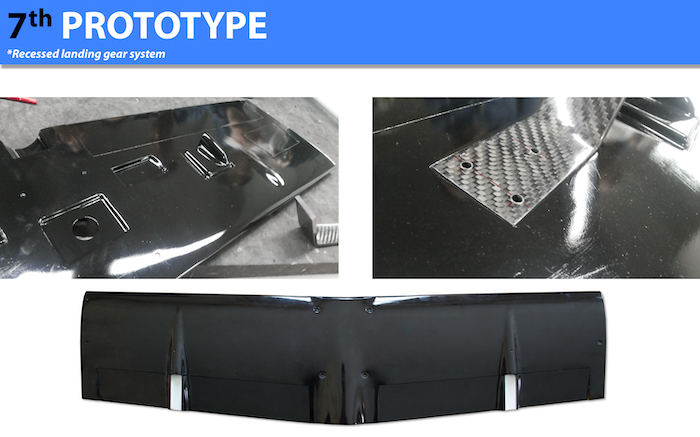 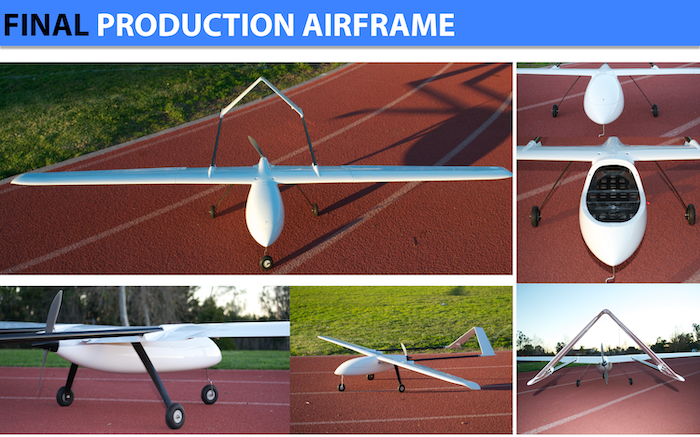 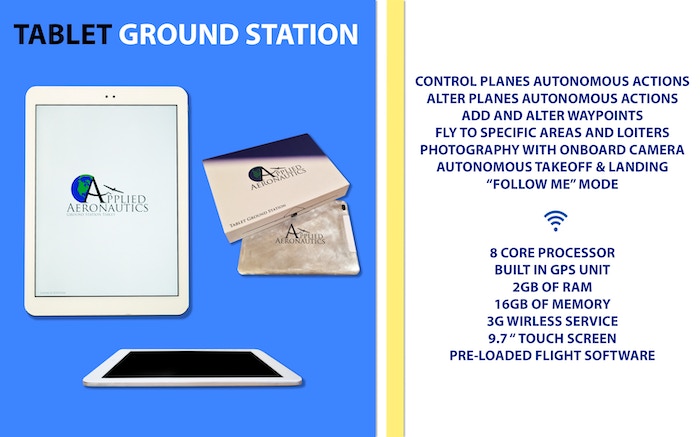 Our custom built tablet ground station gives you the ability to monitor onboard flight telemetry information, execute autonomous flights as well as control and alter aspects of the flight in real-time. These aspects include, adding waypoints, flying to specific areas and loiters, photography with an onboard camera, returning to your takeoff location and autonomous landing.

The ground station has an 8 core processor, a GPS unit built-in so that your UAV can follow you, 2GB of ram and 16GB of onboard memory with expandable storage thanks to the micro sd card slot on the side. The unit also has the ability to use a sim card for up to 3G wireless service or you can use its built in wireless b/g/n capabilities.

The screen is a 9.7” 10 point capacitive touch screen with a resolution of 2048 x 1536 giving it a clarity and resolution matching the same quality as a new iPad.

Our ground station tablets come preloaded with custom software. This software is provided to us for free. For every tablet ground station sold, we will make a $5 donation to the developers to thank them for their hard work and generosity. 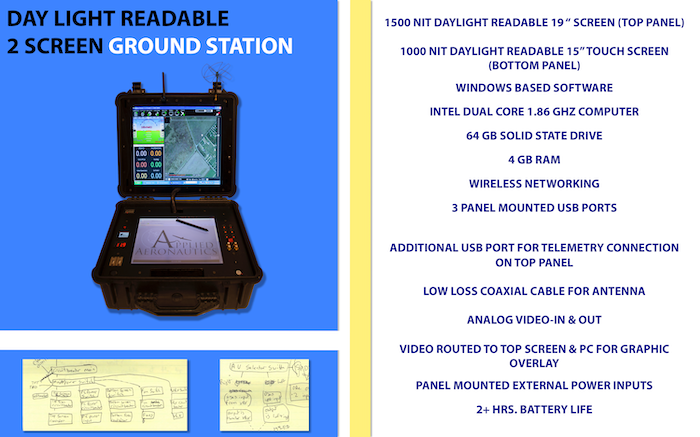 Our two-screen ground station has been in development for over a year. We have completed and tested several prototypes, and what we ended up with was one rugged, capable and self-contained package.

Wireless networking is present and multiple USB ports are panel mounted. It also contains a Windows based computer for running necessary software for automated flights and real-time data telemetry as well as an additional screen to view a live video stream at the same time. Analog video-in is also included viewable on the PC under various mission planning software applications or by using one of the various video inputs to display video on one or both screens. The PC can be viewed on the top screen as well, so there is no shortage of screen space. We were also sure to add a small space in the panel, which is perfect for housing your preferred video receiver.

We’ve added a video out that is routed to both the top screen and PC for ease as well as a power plug within the space for convenience. We also routed a low loss coaxial cable to the top panel so that your antenna of choice can be mounted effortlessly. On the opposite side of the top panel, there is an additional USB port for telemetry connection and ideal antenna placement.

The ground station has 2+ hours of battery life at full brightness, and external power inputs are panel mounted. 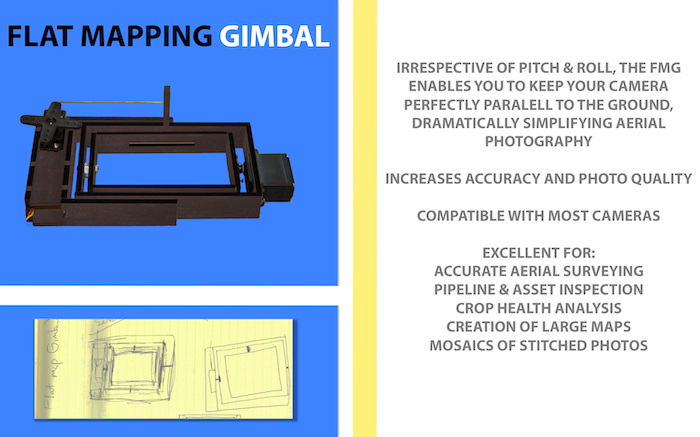 When an airplane is not perfectly level you can end up with crooked and inaccurate images, forcing you to redeploy your UAV for a second pass. A Flat Mapping Gimbal corrects this.

Mounted into the bottom of the fuselage and compatible with just about any camera, this downward facing gimbal keeps your camera parallel to the ground through banking turns, takeoff, ascent, descent and and landing. No matter how you fly, rest assured that your photos will always turn out. 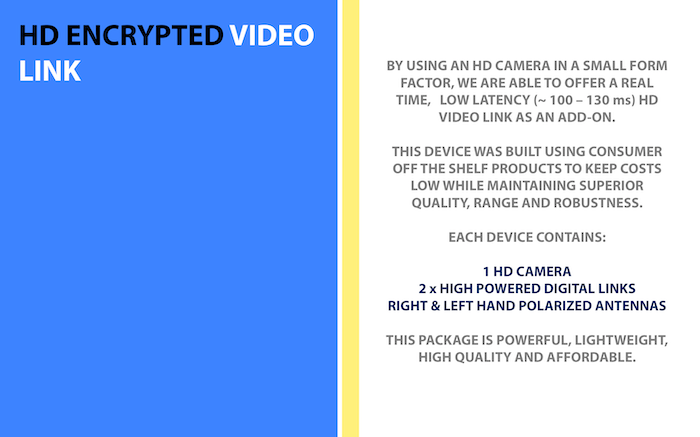 To offer the most reliable, high quality yet cost conscious system we could, we spent considerable time looking at how the core operation works from start to finish. We tested ideas and systems that we thought were ideal as well as open sourced projects that our community as a whole helped design. After all, we find that through a collective effort on these endeavors progress is made much quicker. To that end, we wanted to offer commercial grade components where they were needed but not where they weren’t. The overall package results in the best of both worlds, a robust, highly capable system that is constantly updated, as well as extremely cost conscious given its abilities. We used diversity antennas on both our transmit and receiving units and a small form factor and ability to change antennas that are suited to your exact needs in a moments notice. We also utilize antennas operating at alternate circularly polarized directions (LHCP and RHCP) on both the ground and air units to maximize the diversity setup and antenna separation as we are using a MIMO type setup. High definition video is possible with no more than ~100-130 ms latency. 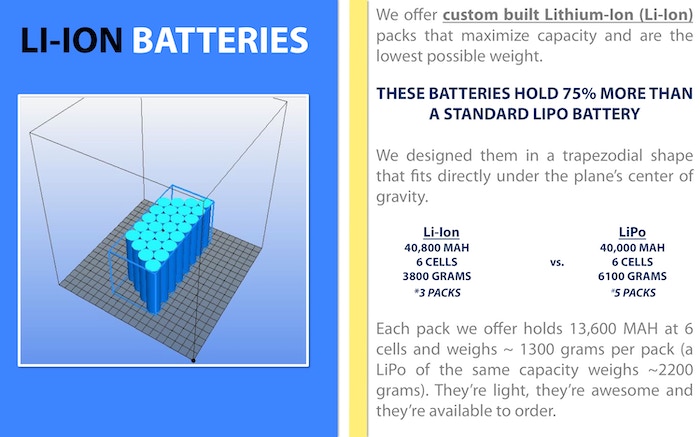 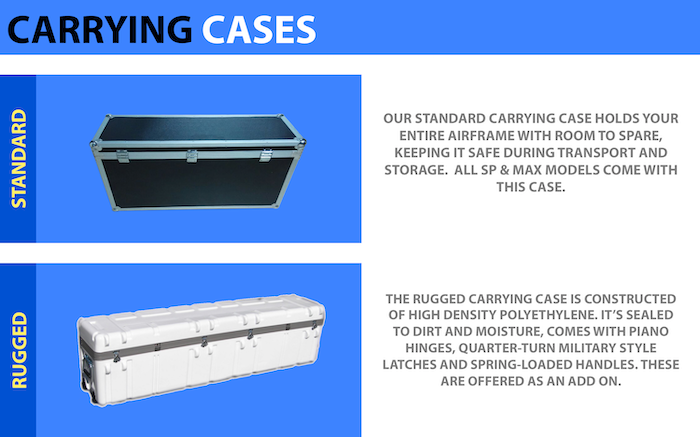