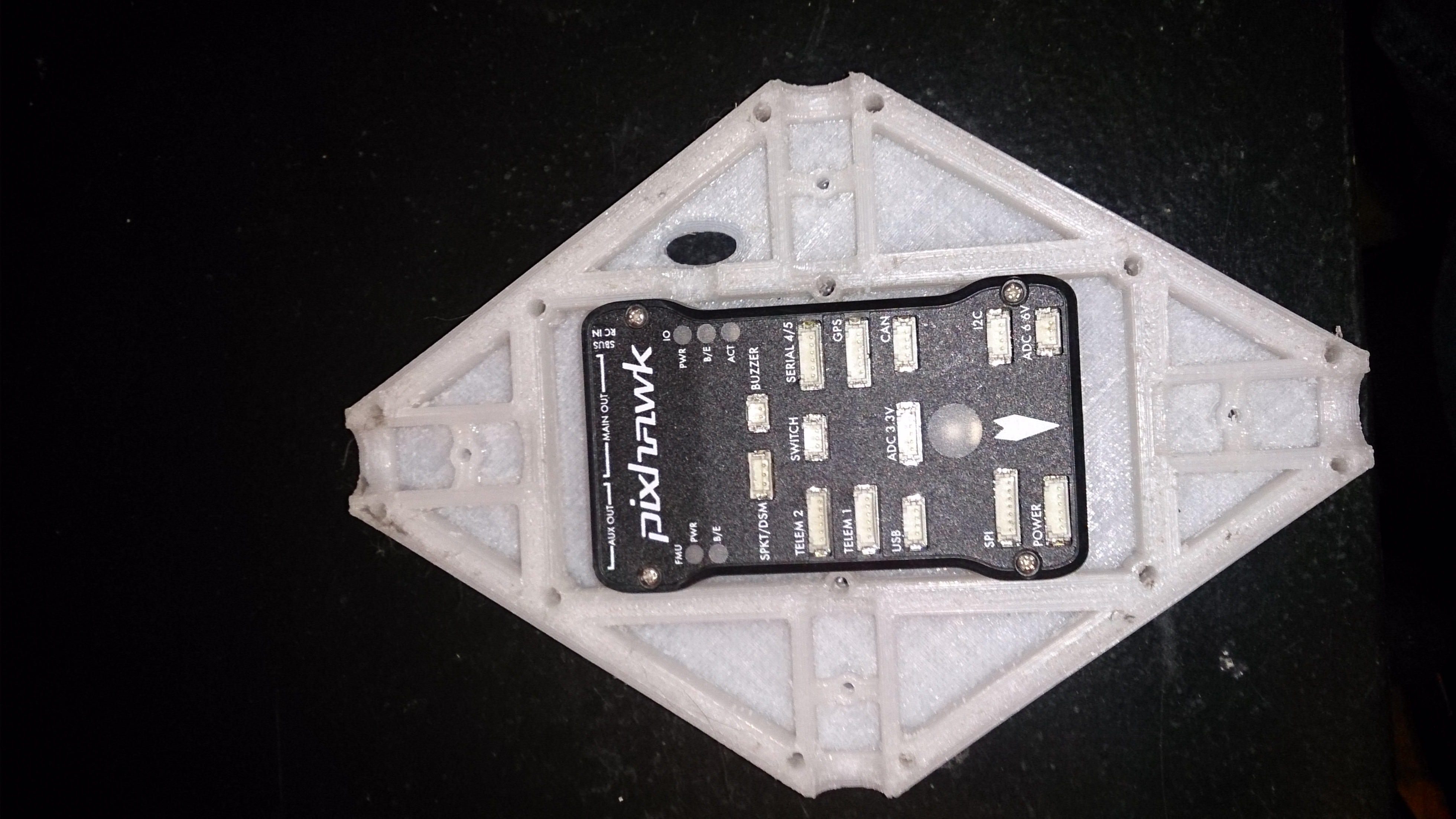 OK...this image above is boring... If you don't feel to read now, just go further down and watch videos. I hope that will bring you back at my story here. Enjoy...

In the research world, the Friday experiment is what researchers often do at the end of a hard working week. Basically, they give a try to a wild, crazy and unsupported idea, just to see the outcome.

My Friday experiment was triggered while passing by an out runner motor sitting on a shelf near my 3D printer. This motor and three others were acquired many month ago and never used since their specs were not compatible with my current projects. I had in my mind an idea of a little quad airframe that would be built very tightly around a Pixhawk controller. So, why not use those motors an a 3D printed hub designed to hug the Pixhawk. I fired up fusion 360 to draw the required parts, stuffed the STL files in my Replicator 2X that I recently successfully tuned for nylon printing and pressed start. The resulting parts were simple and nearly indestructible. Finally, after some assembling and tweaking the final product was ready for a test flight. So imagine a crude Quad Rotor with some unbalanced three blade props that I could not wait to test even if it was a dark late evening.

First impression at arming...something is wrong! Motors spin OK but so quietly. Gave a bit of throttle... not much more sound. A bit more, which was still very little and my Quad just jump in the air. At first, I thought that I messed with the ESC calibration but after disarming and reviewing everything, it jumped to my face! I have built a little overpowered Quad. I later validated that it loitered at around 30% throttle. Since then, every flight of this little Quad were at turn very relaxing because of noise, stability and versatility and amazing because of performances. With some small changes it became even more and I now call my creation LQTC.

Please allow me to introduce my LQTC1, The Little Quad That Can...

Initial prototype was a lozenge shaped hub that wrap around a Pixhawk. Four T-Rex 450 helicopter carbon fiber tail boom locked solid in this hub. Simple motor mount can slide in any position on the round arm (T-Rex tail boom). Some velcro and double face tape securing a four in one 20 amps ESC (Q-Brain ESC) plus a set of tie-raps for batteries.

Here are the original specs of LQTC1:

I don't have picture or video of that config but here is the result of a test I did:

With the 9x6 Master Airscrew Propellers the current draw was close to 20 Amps so I switched to 10x5 Graupner 2 blades Props which draw 15 Amps. With that setup, a full loiter flight gave a 26 min. flight duration.

On a second flight, I added a few dead lipo's as weight. Total extra weight was 655g for an AUW of 2245g. Flight duration achieved 16 min. flight duration with a loiter throttle setting of 70%.

Being very happy with those results, I decided to refine the platform which added some weight but enhance the overall look of my LQTC. Since then, I have tried 10,11,12 inches Graupner size props with the original AX-2810Q 750 Kv outrunner and currently, it is flying with an AX-4008Q 620Kv hooked to the 12x6 Graupner prop powered by two 4S 5200 mAh multistar batteries.

For unbelievable performances, the AX-2810Q with 10x5 Graupner is the way to go. On qty(2) Zippy compact 4S 3700 mAh it gave without a payload an autonomy of 25 minutes. For the rest of this blog, lets call it config 1.

For best compromise between performances and payload, the AX-4008Q 620 Kv with 12x6 Graupner propellers and 2 x 4s 5200 mAh multistar lipos seems an interesting setup to consider. Flying is a bit more sluggish but still very impressive in my opinion. For the rest of this blog, lets call it config 2.

So, enough reading and lets watch some videos and pictures...

I will first start with a no payload flight video in config 1 (you may observe that airframe design was slightly different from the pictures below).

Now here is a video I did myself while flying the Quad so my apologies for the jerkiness of the video. It is flying in config 2 with a 1 kg payload on a sling. Weight without load is 2Kg (including 2 x 4s 5200 mAh multistar lipos (770g). So lets see it fly with an AUW of 3Kg.

Now that you've seen it, lets make a few comments:

1- Flight time was 18 minutes. I inadvertently shut down recording close to the end but restarted it right away (reason for two videos up there).

3- without the payload, I get 35 min. flight time (80% loiter and 20% more aggressive flying with 15% battery capacity remaining).

4- the jerkiness you observe in that video is a more amplified version of something I observed when I fly on the EKF mode. DCM mode is smoother. Without a payload, there is no jerking at all in DCM and, in EKF, there is a more subtle version of the jerkiness seen in that video. Something I want to investigate later but I would appreciate your comments in that regard.

5- Oh! and almost miraculous, vibration level on all axis is flirting with zero value. I must have been doing something right...or nylon has special properties or both.

Finally, here is a link to my Fklickr album for more pictures and videos of my Little Quad That Can (LQTC) and also some of my other projects. Interestingly, you will see pictures of the next iteration called LOTC for Little Octo That Can.

I don't know what I will do from here, give the STL files as open source, start a kickstarter campaign(maybe an Multirotor Experimentation Kit) or sell the printed parts online. One thing is sure, I would love to see my realization becoming the Quad of the people and who knows, eclipse DJI 450. In my opinion, this platform is ideal

Am I wrong or this little Quad is a marvel? Please tell me gently...