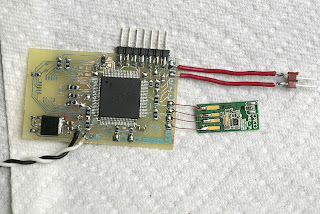 Manely conrolling a USB device from a microcontroller, something we hated when it was our day job, but now suddenly need.

Also in this issue, home made JTAG is now flashing 3.7kbytes/sec.  The latency is so bad when changing data direction in a USB device, bitbanging the reads in the JTAG protocol is killing us.

Got the ARM up to 168Mhz.   Pretty fast for a home made board & it won't need a crystal to drive the camera.  The GPIOs go to 15Mhz even in software bitbanging.

Should be noted the STM32 can be bricked if the PLL is misconfigured for over 168Mhz.  JTAG will start timing out in the halt requests & you'll never be able to reflash it. 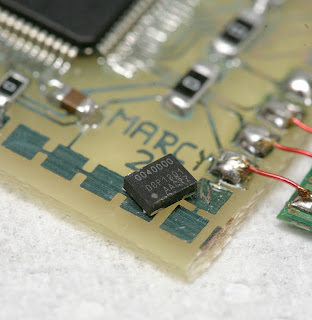 Fortunately, we have some oscillator chips for the camera to drive the ARM at a lower frequency & get it reflashed.  It automatically switches to an external oscillator if one exists.  Those are real tiny oscillators.


Next on our list was the reality of not having a C library.  It's a shame to run such a powerful chip with no C library or math library, but getting those to work requires a lot of trickery & we don't need them yet.

The C library does a neat thing during initialization: copy the compile time initialized data tables to SRAM.  Since we don't have enough SRAM to store data tables, it was easier to just hack around it.

find everything starting in a d in the source code & change it from static __I to const to get the compiler to store it in flash.

The claim of high speed USB on the product matrixes was wishful thinking.  In reality, the high speed mode requires an external PHY.

There are 2 USB cores.  It could theoretically be 2 USB hosts, simultaneously.  1 core does full speed & low speed.  The other core does high speed & full speed, but getting the high speed requires an external PHY.

Since the Discovery board only uses the FS pins, many #defines & switches have to be hacked in the source code to use the HS pins in full speed mode.  Some of them are labelled FS, some are HS, & some are HS_FS.  Then you need to rename the interrupt handler HS instead of FS, everywhere.

2 more days of hitting a brick wall revealed the USB host had never been successfully used with GCC.  It was getting URB_STALL errors, which caused it to return all 0 for the config return packets & never enumerate.   1 other guy had the same problem & managed to fix it by replacing all the uint16_t_uint8_t unions with uint16_t in the USB_Setup_TypeDef.


GCC aligns structs & unions on 32 bit boundaries.  Don't know how he found that, unless he compared the traffic with a functioning host.  Would be nice if all microcontroller makers just made their stuff work the same way instead of requiring a ground up debug operation for every new chip.

For all the effort we put into using a tried & true, heavily supported code base, it's still more of the same.  Can't remember doing anything that had a tried & true code base.


Onward & upward with this operation.


You can be sure the AR drone uses hostapd.

The great debate is whether to port the minimum required sections of the rtl8188 driver to Marcy 2 or create a fake kernel layer to interface the stock driver.  Either solution is bad.  1 way involves porting every new driver that's ever going to be made.  1 way involves emulating a huge amount of software which changes in every kernel release.