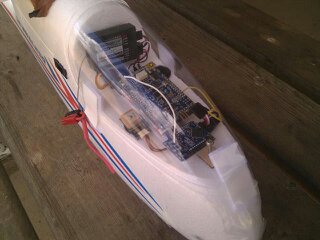 I finished my SkyWalker build last night, and went out to CMAC to take it for its first flight. All the ground tests looked good (including the new 'system check' in mavproxy) so we took it for the first flight. About 60 meters into the flight I heard "MODE STABILIZE" from mavproxy, and I lost control. Jack and I watched as the SkyWalker glided gracefully to a perfect landing in the grass while we wondered what had happened.

After looking at the mavlink logs, we saw that the APM had started to receive failsafe values from the receiver soon after takeoff. Jack thought the antenna on the receiver might be a bit dodgy, so we replaced it with a 2nd receiver I happened to have in my box of spares, and we tried again. It was almost an exact repeat of the first flight, losing transmitter control soon after takeoff, APM going to STABILIZE mode, and the SkyWalker landing perfectly in the grass.

We then started to do more extensive ground tests and found that the Turnigy TGY 9X transmitter had failed. It has previously had good range, but for some as yet unexplained reason it now doesn't do more than 60 meters or so.

We had a good look inside the transmitter module, and we can't see anything wrong. The antenna cable is a little bit abraded on the transmitter, although it isn't clear if that is the cause of the issue. Strangely, the range test button doesn't find the problem. I get the same range with the range test button pressed as when its off. When I got home I checked the range test switch in case it was faulty and it seemed to be working fine (at least as far as my multimeter can tell). It looks like I might need to buy a more expensive transmitter. Pity, as otherwise the TGY 9X has performed well!

The real hero of the flight was the APM. The failsafe values in my receiver had the mode switch set to STABILIZE, and it glided the plane down to a perfect landing both times. I don't have it set to RTL for failsafe as it would be a breach of the club rules to circle above the takeoff point (you'd be going over the clubhouse).

Tomorrow we're going to try a different transmitter and see if the SkyWalker can live up to its reputation as a great UAV. We've got a "mow the lawn" search pattern setup to simulate the type of search we will be doing for the outback challenge. If that goes well we will put the pandaboard and ptgrey camera in the plane and get back to testing our algorithms for finding Joe.

Once things look OK with the SkyWalker we'll see about putting all the equipment in our CyberHawk UAV, which is what we plan to use for the OBC next year.