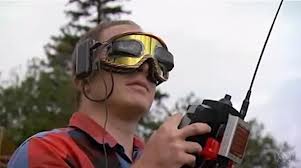 The Complaint alleges that on or about October 17, 2011, Mr. Pirker (a Swiss citizen residing overseas) was the “pilot in command” of a “Ritewing Zephyr powered glider aircraft” in Charlottesville, Virginia. Compl.   It next asserts that “[t]he aircraft referenced above is an Unmanned Aircraft System (UAS).”  As a matter of undisputed public record, a Ritewing Zephyr is in fact a popular type of radio-control model airplane made of a kind of styrofoam and weighs approximately four and a half pounds once equipped with batteries, radio, motor, and other components.

The balance of the Complaint sets out a list of allegedly dangerous characteristics of Mr.Pirker’s operation of his model airplane on October 17, 2011. It alleges that he “operated the abovedescribed aircraft at extremely low altitudes over vehicles, buildings, people, streets, and structures.”  More specifically, it alleges, inter alia, that he operated the model airplane “through a UVA tunnel containing moving vehicles,” “below tree top level over a tree lined walkway,” “within approximately 15 feet of a UVA statue,” “within approximately 50 feet of railway tracks,” “within approximately 25 feet of
numerous UVA buildings,” and “directly towards a two story UVA building below rooftop level and made an abrupt climb in order to avoid hitting the building.”

Patrick Egan of sUAS News was given access to documents today and he wrote:-

Without a doubt, there is a lot riding on this issue for both the community and FAA. As we have seen in the past, people start to line up on those different sides of those issues with independent views on how the law works, what image the community should portray. Whatever the eventual outcome, we should at the very least have a better understanding and some clarification on how the process is supposed to work, and discern where exactly the U.S. RPAS community stands.

Trappy, along with Chris Anderson is a speaker next week at the Drones and Aerial Robotics Conference