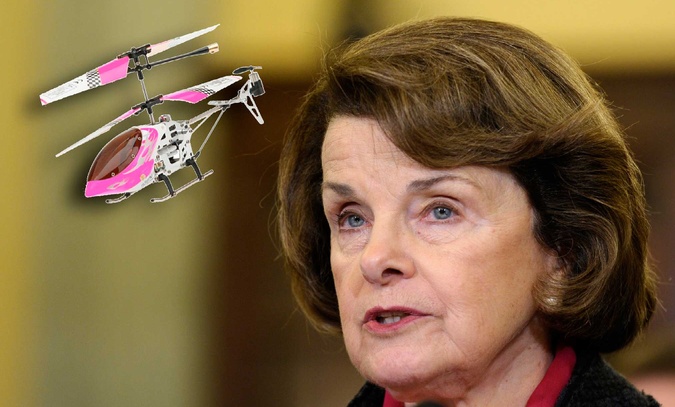 To reinforce her concerns about the use of commercial drones, California Senator Dianne Feinstein told her peers on Wednesday about an encounter she had with a drone at her house.

Feinstein said she encountered the flying robot while a demonstration was taking place outside her house. She said she went to the window to peek out — and “there was a drone right there at the window looking out at me.”

The Wire spoke by phone with Feinstein's spokesman Brian Weiss, who confirmed that the incident happened at the senator's house in San Francisco several months ago. At about the time, it seems, that Code Pink showed up to protest Feinstein's support for the NSA.

On June 15, the anti-war group held a protest focused on Feinstein, which included activists in disguises and, yes, two remote-controlled helicopters, which might creatively be described as drones. Here's video of the event.

If you skip ahead to the one-minute mark you can see the two helicopters that were at the scene, including one very similar to the small pink helicopter at right. Photos taken that day show the helicopter more clearly. Steve Rhodes, who took the photos, confirmed to The Wire that the helicopters flying around outside Feinstein's home didn't have any cameras, so they weren't "looking in" anywhere.

Code Pink's Tighe Barry, coordinator for the group in D.C., told The Wire that flying these toy helicopters is common at their protests. He participated in one such protest in San Diego at the home of the president of General Atomics, makers of the much-more-scary Predator and Reaper drones. The toy helicopter, Barry said, was purchased on Amazon, as this one might be. And Feinstein is a regular target for the group. "We've held many, many, many vigils there over the years," he said.

So was this the drone that frightened Feinstein so much? Weiss, the senator's spokesman, didn't know what kind of drone the senator was describing. But if it was a blind one the size of a crow, the Senate Commerce Committee can sleep a bit easier tonight.