Hey folks... this is just informational. You're welcome to look into the data for more lessons learned, I'm sure there is more to learn from the telemetry logs, but mainly I simply wanted to share an amusing but not very productive day. Too often we see only the non-starters and the successful flights here, so I wanted to publish something in the middle.

Airframe: Bixler AAR-AP18 (trainer aircraft, w/MK GPS, no camera)
Autopilot: APM2.0 (GPS disable mod, external GPS, Airspeed Sensor, CC ESC, 3DR telemetry)
Autopilot Software: ArduPlane 2.50, Mission Planner 1.2 Mav 1.0
Immediate Cause of Accident:
Operator Terminated Mission In Flight
Contributing Causes of Accident:
- Electronics failure - Heading data was ~180 degrees off
- Procedural gap - Magnetic/Compass/Heading sensors were not verified to be functioning as expected immediately prior to the flight. Field conditions are not favorable for a detailed preflight check because it is very difficult to see the ground control station screen in full sun light.
- Operator Error Leading to Structural Failure - Initial Launch was followed by a climb that was too steep. Correcting this initial climb caused excessive dihedral in the wings, over-stressing the main wing spar. The hollow CF wing spar failed. Subsequent flight in "Stabilize" mode was successful, but the aircraft's safe operating parameters were compromised. The remainder of the flight was only marginally affected by this structural failure.
- Autopilot Navigation Error - As a result of the heading failure, when the autopilot automatic mode was enabled, the designated flight plan was not followed. The operator observed the plane fly towards Waypoint 1. However, the plane continued to fly in an arc past WP1 and continued out of the planned flight area, heading East over Lake Judy. The mission plan called for increasing altitude through WP1 and WP2, to achieve 100m AGL. Further analysis shows the autopilot had cleared WP1 and WP2, but should have been turning for WP3. Because the plane did not have correct heading information, it did not turn for WP2 (or WP3.) It had gained only ~33 meters, and was operating near the tree tops. After flying past WP1 and not turning for WP2/3, the plane was momentarily obscured from the operator's view and was seen flying east south east. The plane appeared to be losing altitude slightly rather than gaining attitude and was not turning, as expected. At this point the operator elected to terminate the mission in flight before the unknown navigation problems resulted in fly away. The plane was switched out of automatic mode and directed blindly to the ground. It appears to have flown through a tree top, stripping off the horizontal stabilizer and elevator control surface, losing half a wing, including the loss of the associated aileron, and disconnecting the telemetry module, which, in this airframe, is mounted on the back surface of the main cabin area. The plane appears to have continued flight  for some distance, perhaps 200 feet or more, even after the catastrophic loss of the horizontal stabilizer, half a wing, and the elevator. On directing the plane to the ground, the throttle was reduced to zero. However, on contacting the ground, the aircraft appears to have lost radio contact with the control unit, and that triggered a failsafe mode "Return to Launch" This spun up the propeller, even though the aircraft was laying in an inverted state and was mostly wingless. This resulted in the partial destruction of the propeller.
Accident Site Photo: Additional Failures which did not contribute to the accident:
- Manufacturer defect - There is a manufacturer defect in the soldering associated with the APM2.0 daughterboard. This causes the onboard data flash to report as not present. See the following for similar reports:
http://diydrones.com/profiles/blog/show?id=705844%3ABlogPost%3A920227&commentId=705844%3AComment%3A921679&xg_source=activity
http://diydrones.com/forum/topics/apm-2-0-dataflash-issue-help-needed
The autopilot is outside of its warranty period, and with the introduction of APM2.5, this board is unlikely to be serviceable.
Telemetry provides excellent data (still being mined) for accident analysis, however, the data does not include the last few seconds of flight. Latency in reporting, and contact with the treetops may have contributed to this missing period, as the radio module was detached from its mount point, and was ultimately found detached from the plane, several feet from the accident site.
Recommendations:
- Improve pilot flight experience
- Reinforce all CF wing spars
- Develop written preflight checklist
- include verification of flash data storage functionality
- include verification of valid heading information
- Improve structural strength of the wing surfaces though the application of a wing skin or edge tape. This will improve wing strength and help to keep all the pieces together in the event of an accident.
- Investiate further:
- Did switching to auto while at 100% throttle (rather than 45%, the standard operating position) contribute to the accident?
- Might the left aileron control rod have been lost earlier in the flight, and might it have contributed in some way to the navigation failure, or was it lost during contact with the tree tops or ground?
- Heading issue. Is this a compass initialization problem? Was it caused by EM interference?
NOTE: A different APM used on this property also showed compass heading issues, but the APM was mounted in a cardboard box and driven around the property on an ATV. It was also off 180 degrees; warrants further investigation.
- Specific cause of navigation failure - why did the plane continue to fly East when it should have turned for WP2/3?
- The mission called for climbing to 100m at up to 15 degree pitch, however, the plane does not appear to have climbed significantly on its own. Why?
- What can be done to improve preflight operations? Screen visibility? Staging & leveling?
- What can be done to restore data flash function on this APM? Verify proper function of data flash for inventory of APM2.0 units.
- Continue to search for missing wing sections
Damages and Costs:
The horizontal stabilizer, elevator, elevator control horn, and fittings were stripped from the plane. The right wing was sheered from the plane at the end of the wing spar, and has a 4 inch gash with 1/2 missing material on the trailing edge of the right wing. Both wings suffered significant damage to the training edge where the wing joins the fuselage, as a result of remaining fixed with velcro to the body. If the missing wing sections can be found, the plane can be reassembled. One servo wire was stripped from the (missing) servo, from the half wing section, and is a loss. The other servo control surface struct was lost in the accident. The propeller is a loss, and the motor mount has broken lose, it is not clear if it, or the motor, will need to be replaced. The APM, flawed as it is from its manufacturing defect, appears to be operating normally, other than the failure to log. The pitot tube was pushed into the airplane, but appears to be fully functional. The Radio receiver and telemetry models appear to have come through the crash without damage, and the same is true of the ESC. No damage is apparent to the battery.
The half wing section and the horizontal stabilizer have not been found, despite two sorties attempted specifically to find these missing, bright white sections of foam, about 12-14x8" each.
There was no observed damage to property, trees, people or cows. The unrecovered parts cannot contribute to a fire (as an unrecovered lipo battery might) and the missing parts are thought to be too large to be accidentally swallowed by a cow.
Estimated cost of this accident: $19-60, depending on recovery of the missing wing sections.
Flight Path and Mission Plan:
NOTE:
Red & Yellow  - Manual mode launch
Orange & Green - Stabilize mode pilot turn and climb towards WP1 before engaging Auto mode. Stalled and recovered during turn.
Blue  - Auto mode Autonomous flight, crash (telemetry ends before switching out of auto mode)
Altitude of the automatic flight is approximately 100 feet AGL, which is not sufficient to clear all trees. Mission called for climbing to 100 meters at up to 15 degree pitch. However, the plane does not appear to have climbed at this rate. 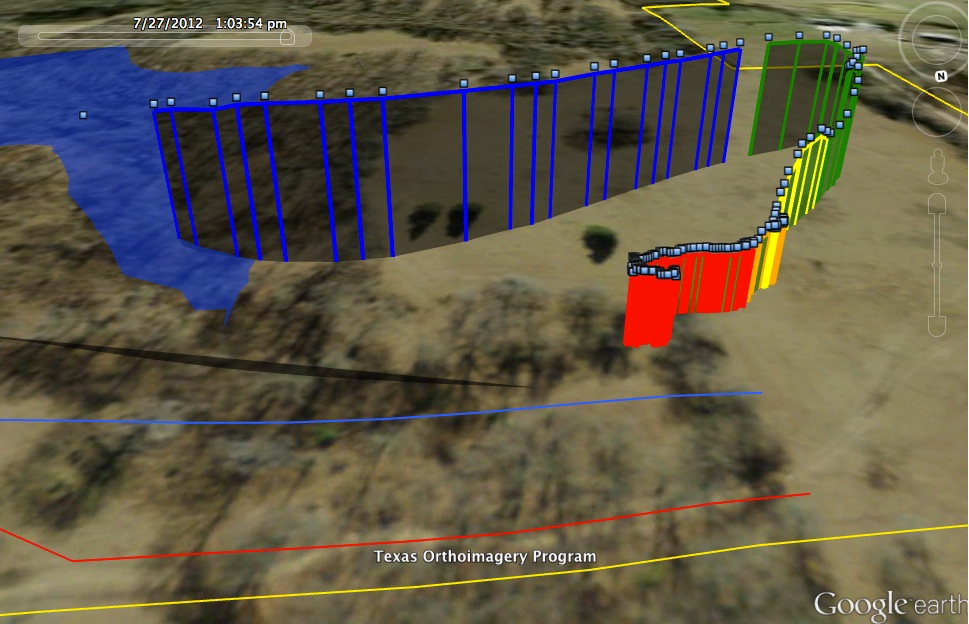 Mission Plan, showing final position of aircraft. Notice it flew through WP1, but did not turn towards WP2. Plane is hand launched. It dips very close to the ground before the pilot is able to correct elevator. Overcorrection of the elevator results in 30 degree up pitch. Notice that the GCS reports the plane thinks it's heading is northerly. The plane is actually heading south, and shown by its flight path.
The subsequent overcorrection to pitch damages the CF wing spar. The autopilot is switched to stabilize mode, and the compass heading issue is not affecting flight. The operator is unaware, at this time, of the compass heading issue. After turning the plane away from the neighbor's property, switches the aircraft into "Auto" mode.
The aircraft appears to be functioning in auto, flies towards WP1, but is not climbing as expected. The HUD shows an unexplained attitude not observed during the flight. This attitude would have resulted in a turn, however, the plane continues straight. Stabilize was functioning just prior to this switch to auto and the plane appeared to be level at this time during the flight. Is it possible that the APM became dislodged during flight and is not secured to the frame? Or did vibration result in sensor aliasing, causing uncorrected gyro drift at the same time I turn was expected? Whatever is happening in the autopilot, the plane continues a generally straight flight path well out of the flight area despite showing a 45 degree right roll.
It appears, from the HUD, that the plane believes it has achieved WP1 and WP2 already and should be targeting WP3. The operator cannot see the screen in the strong sunlight (103 degrees near noon; time shown is incorrect, it's a VM that was suspended until just prior to the flight; real time is ~10:45am) even if he were to look away from the plane and believes the plane should turn for WP2. A correct turn for WP2 or WP3 should take the plane West. However, it continues East. At the tree line, the plane arcs right, is obscured from the operator's sight, and the operator decides to bring the aircraft down before it flies away or continues towards any of the structures on the property or continues flying farther over the lake.
It is worth noting in this screen capture that the HUD appears to be at a ~95 degree angle. In reality, the APM is completely inverted, and pitched down (see accident photo above) and was securely velco'ed in the original position inside the Bixler. Something between launch and early parts of the Auto mission has altered the gyro readings. 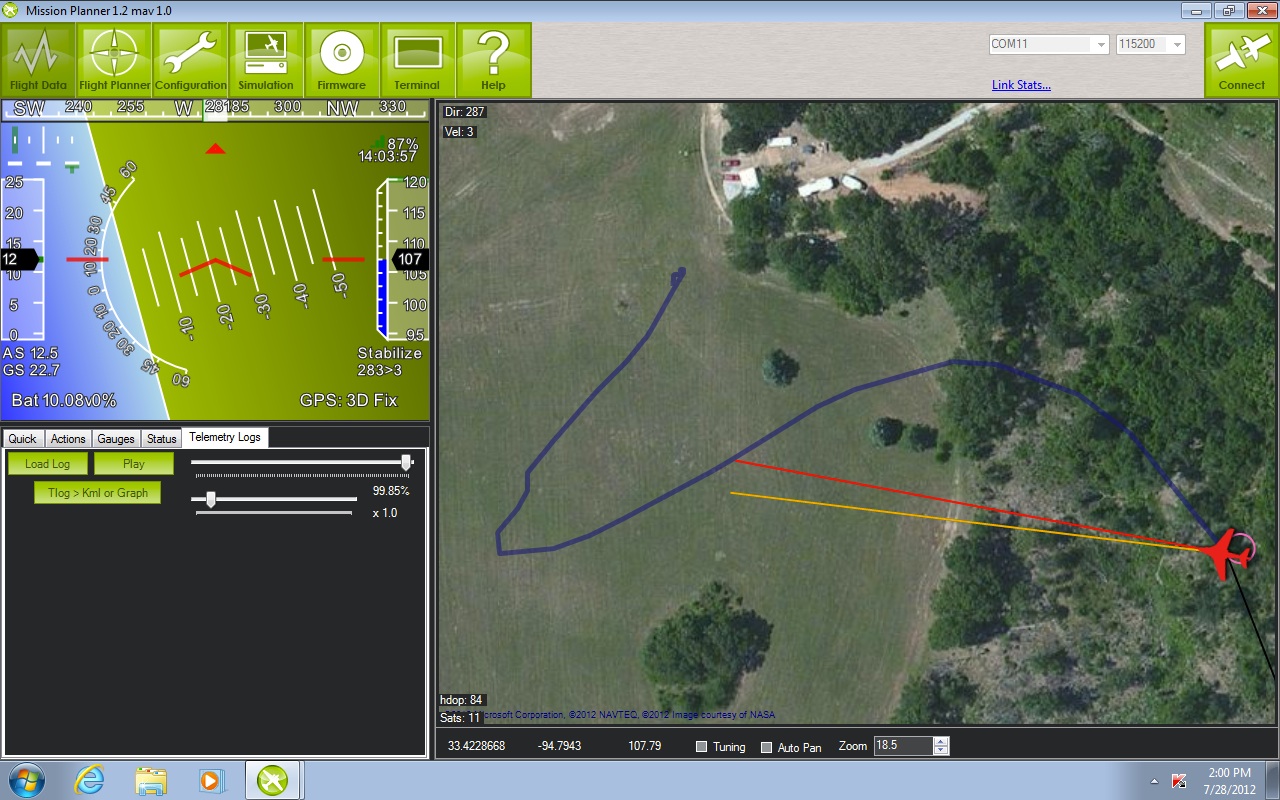