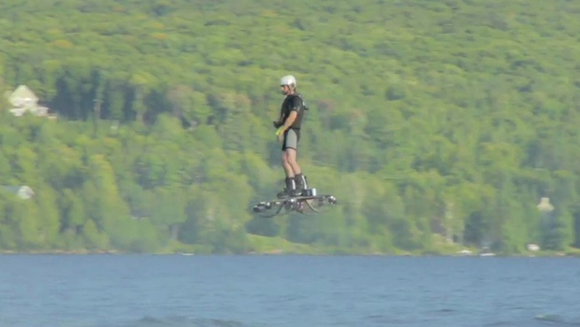 Catalin Alexandru Duru didn’t just set a new world record for farthest flight by hoverboard, he smashed the old one.

To become a Guinness World Record holder, Duru needed to fly his prototype a distance of 50 metres. Instead the Canadian inventor flew his propeller-based machine — what he calls the “first real-life hoverboard” — a whopping 275.9 metres across Lake Ouareau in Lanaudiere, Quebec.

Marty McFly would be proud.

“I will showcase that stable flight can be achieved with a machine one can stand on and control with their feet,” Duru said before his record flight.

Duru said his board took him about a year to design and build and can be used anywhere and can reach “scary heights.” (For the record-breaking flight, the hoverboard glided about 5 metres above the lake’s surface.)

A Guinness spokesperson confirmed the authenticity of the above footage, and said:

“This is a truly mesmerizing and incredible feat in the world of engineering and transportation. It’s always pleasing to see individuals such as Catalin Alexandru Duru achieve a Guinness World Records titles such as this in which personal endeavour continues to amaze us all.”