Using drones to transport medical samples such as tissue sections, blood, serum, vaccines, organs, etc., at the signing ceremony of the medical logistics drone project and the cooperation of industry, university and research institute held at the Second Hospital of Nanhua University, this scene made the witness praise.

During the operation of the medical logistics drone, the eye-opening, well-trained staff independently loaded the safety box (packages, blood, and other medical samples) into the drone and passed the artificial intelligence application. Start the drone. Then, the drone was autonomously flew to the pathology department on the 5th floor of the destination outpatient hall on the 9th floor of the second inpatient department of Nanhua Second Hospital along the scheduled route, and the safety box was received by another staff member. 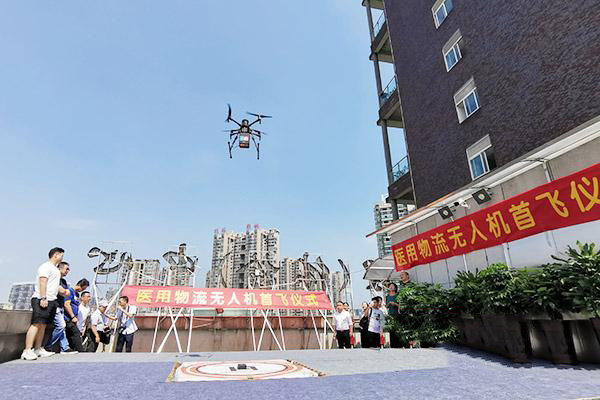 The medical logistics drone has a load capacity of up to 2.5 kg, an infrared sensor is used to guide its take-off and landing, and in an emergency, the drone has a built-in parachute to ensure it falls safely on the ground.

It is understood that the hospital is the first hospital in the country to use the UAV logistics transmission system. After using the drone logistics, the inspection efficiency can be improved, and the position of the inspection center can be flexibly arranged to reduce the repeated investment of large-scale inspection equipment.

However, limited by the drone load and endurance, the application of medical logistics drones needs further research and development, but according to the information that the reporter knows, the current domestic industrial drone manufacturer MMC has developed and produced the Skylle 1550 load capacity. It has reached 15 kilograms and has a lifetime of 81 minutes in the air. If it is equipped with the hydrogen fuel power system developed by MMC, the battery life can reach an astonishing 4.5 hours. It is reported that the company is currently working with a Chinese medical institution to develop and discuss how to solve the harsh conditions of drug and medical device transportation. I believe that there will be a major breakthrough soon.

According to industry insiders, medical drones are currently only used for telemedicine rescue, which often has a huge effect on some emergencies. At this stage, the technology related to medical drones has not yet matured, so the most important thing is to ensure safety, and it is necessary to strictly avoid the interference of medical drones on the aviation system.

RT @_JonMyer: 🏎 We need your help in naming my #AWS DeepRacer Underground Track 🏎 @davidfsmith's track is going to be referred to as 𝗔𝗪𝗦 𝗗…

RT @_JonMyer: 🚨Our 1st AWS DeepRacer Community Race is Underway on http://twitch.tv/aws 🚨 Join us to find out which member of your commu…

RT @davidfsmith: Race virtually with The AWS DeepRacer Community Race and then join us on the track to see how your times compare on the ph…