Many claim to have camera isolators that really work.  But I've never seen data or evidence that is measurable.  Help!

My brother Jim and I put this together, which I just tested on Rufous, the 1 1/2 hour + duration copter. We are trying to build a good camera platform and were looking for final proof or way to measure platform improvement.

#1 Mount a large and fairly common video/photo test page on a wall. #2 Take a photo (time lapse are perfect) using the ship camera, except mount the camera on a tripod. A tripod (or equally solid surface/stand) is critical because this represents the best possible photograph one can take using that camera at those settings under existing light conditions.  Thus, the quality of that photo becomes the goal.  So for this particular day, time, camera, settings, and sign position, this is what a baseline photo might look like.  The photo can be cropped, but no other modification made. 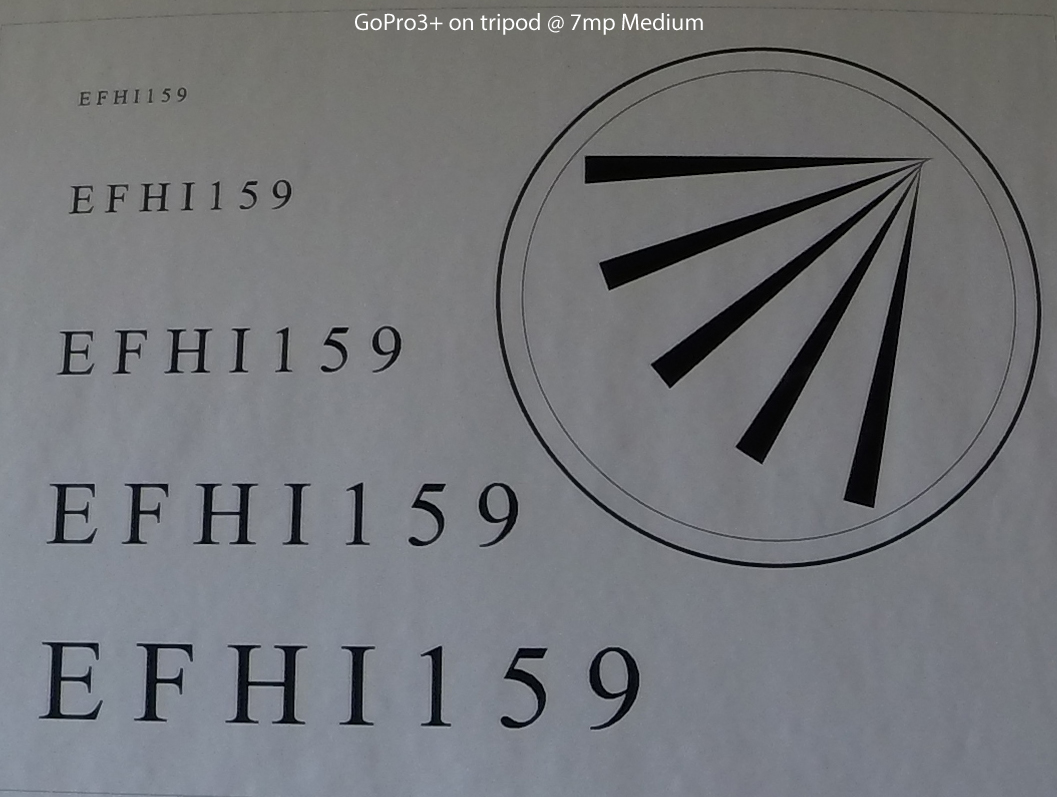 #3 Hard mount the camera to the ship.  Take photos (once again time lapse are perfect for this) by flying the ship to the same position as where the camera was on the tripod.  Use the same settings. Do not move the sign from where it was when shot with a tripod because the light will change.  Also shoot relatively quickly between the tripod and ship shots because light will also change if some of the light comes from outside.  Positioning the camera via the ship can take many tries.  But in time lapse mode, a few minutes of flying with yield results, even for a sucky pilot like me.  Shooting with the camera hard mounted is critical because some methods of isolation will make the shots worse.  One needs to know if this is occurring.

#4 Then isolate the camera using what ever method you think works well.  Repeat step #3.  If the time to do this exceeds an hour or so, then reshoot the baseline using the tripod to ensure light hasn't changed.  Repeat this step with different isolation methods until you obtain the results you want.

The following photos show how the photos might look.  These are all taken from a camera hard mounded to the ship.  Jim and I will be trying different isolation methods this winter.

Photo 1:  The best one taken from Rufous with camera hard mounted to the ship frame.  Notice that viewed by itself, it looks pretty darn good. 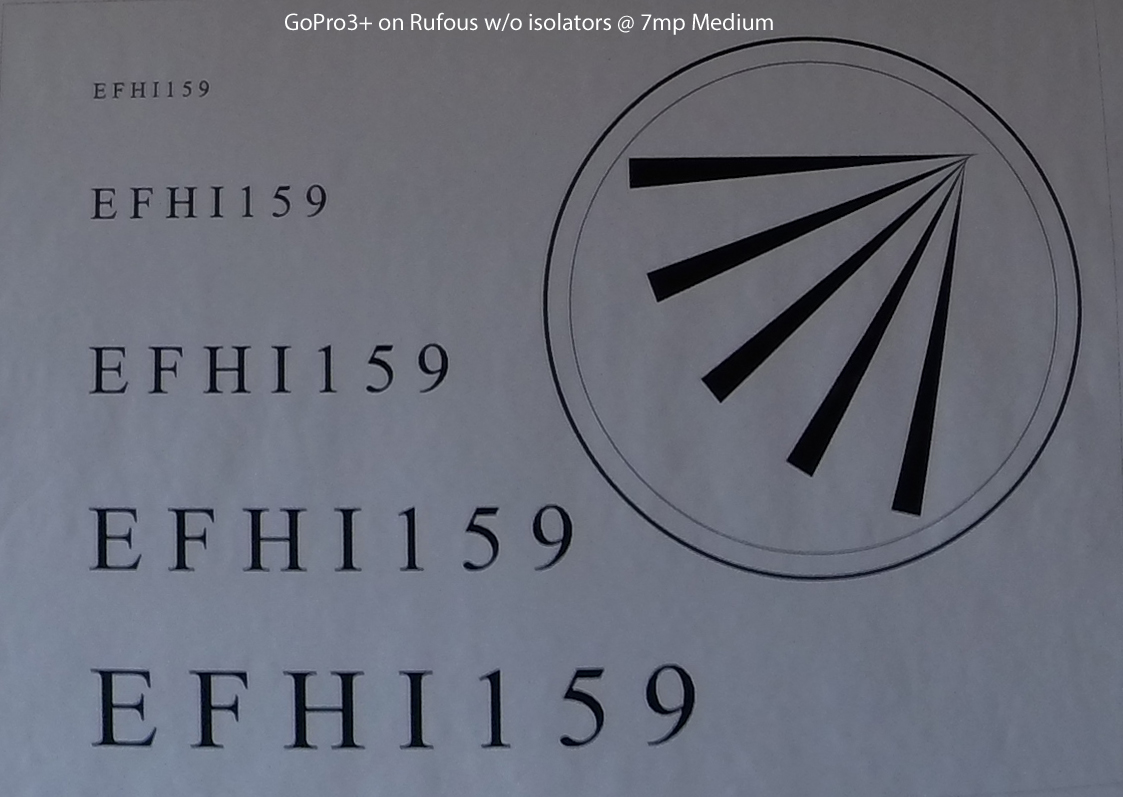 This is the problem with subjective, "Doesn't this video look great?  Wow, I've done a great job isolating the camera."  My response would be (if it wasn't my wife that made the comment), "Compared to what?" Look back at the tripod shot. Notice that the edges of the text are noticeably more crisp.  So this photo is good, but not great.

Photo 2: This is the second best shot. Notice in the smallest text, blur is starting to be noticeable.  Also blur is seen in the art where the lines originate in the upper right corner.

Photo 3:  This represent the typical shot. 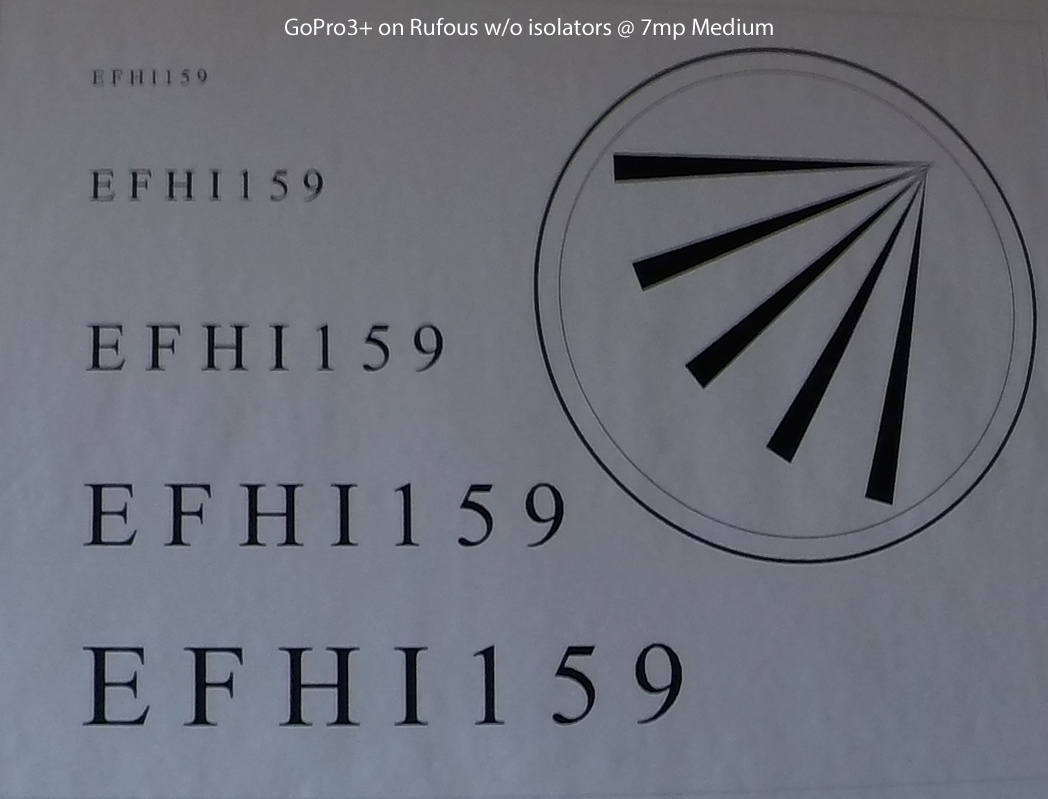 Blur is prevalent in the second smallest text and in the horizontal lines of the art. Blur is showing up in the third smallest text and in the horizontal parts of the art.

This tells me that the primary vibration axis that requires isolation is vertical (z).  This winter we can try different isolators and compare them like we just did above.

We are also considering putting a second APM on the camera platform and accessing the accelerometer data for a numeric statistic.