My first post related to my long-haul home-grown project of a quadcopter : a 1kg, 50cm span UAV.

I intend to put as much knowledge as I, fellows from France, and hopefully you will be able to bring!

First is about flight envelope. Specs aimed at :

-"more than tilting" motors.I wish I could go further than Yuneecs or simple tilting motors. More than tilting because I would like motors to thrust steadily vertically, horizontally, or in any direction, and allow for fixed-wing-style horizontal flight, with wings provinding buoyancy. I stated 100mph as a target horizontal speed. I think about it as an enhanced VTOL aircraft. With a flight enveloppe way broader.

I believe such designs are going to meet certain success, combined with such perching/climbing actuators : http://bdml.stanford.edu/Main/MultiModalRobots.

The main concern relies in getting miniaturized enough smart servos (like the dynamixels) to manage thrust vectoring effectively.

I have thought of an arm based on well-proven robotic ones with two degrees of freedom : 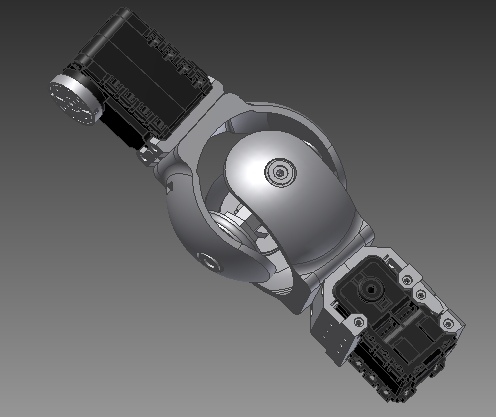 I would like to add maybe one more degree of freedom in the joint, in addition to the last DOF between the frame and the wing (the flexible wing feature, to swap between dihedral and anhedral configs).

I am not an engineer, have little knowledge about mechanics or aeronautics, and do not know if this idea is viable, at all, and on a speedy aircraft : will it reach 80mph without loosing some arms? I am diving into thrust vectoring and flight envelope constraints study.

Some early design I issued with a ducted fan (let's forget about the lidars for now :) ) : After radpi study this design is way too light and fragile, will come back with a more robust one.