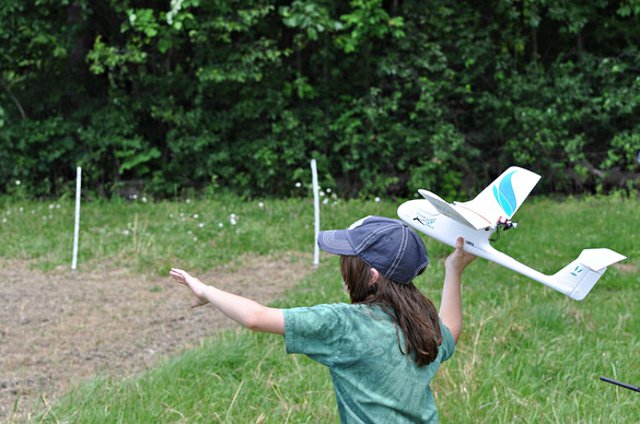 A new company called Rotary Robotics is planning a $100 drone, controlled by a smartphone, for aerial photography. They're planning to launch something in the $250-$300 range, with the price falling later. They call  it "Drones for Peace" (tagline: "@DronesForPeace provides eyes for the everyman. Tyranny has no place to hide.") and are a finalist in the MassChallenge competition for startups. A Kickstarter campaign is also planned.

We are currently developing our first product, a $100 surveillance aircraft designed to bring airborne imagery to the masses. This aircraft functions as a flying point and shoot camera, allowing any operator to gather aerial photos or video with no prior training in aircraft or RC planes. The aircraft is preprogrammed through a map based application on your computer or smartphone.

The user selects the locations which are to be photographed and throws the aircraft. The plane automatically flys to these locations and takes the desired photos, after which it returns to its starting location and lands. The user can then download the photos from the aircraft onto their computer or other mobile device. The photos can be stitched together into a map or used for any desired photographic purpose.