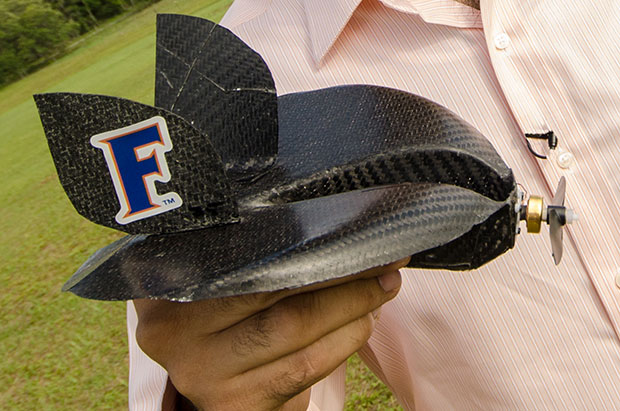 From the University of Florida (via IEEE Spectrum). Note that they don't cost $250 yet (or are even available), but the researchers think they could cost that little someday if produced in volume):

Kamran Mohseni envisions a day when the unmanned vehicles in his laboratory at the University of Florida will swarm over, under and through hurricanes to help predict the strength and path of the storms.

The tiny, autonomous craft — some fly, others dart under the waves — can spy on hurricanes at close range without getting blown willy-nilly, while sensors onboard collect and send in real time the data scientists need to predict the intensity and trajectory of storms: pressure, temperature, humidity, location and time.

Mohseni said people always ask him how the miniature flying machines — just 6 inches long and about the weight of an iPod Nano — can take on one of the monster storms.

The aerial and underwater vehicles can be launched with commands from a laptop hundreds of miles from the eye of a hurricane. Mohseni and a team of graduate students use mathematical models to predict regions in the atmosphere and ocean that can give the vehicles a free ride toward their destination. Once in the vicinity, they can be powered off to wait for a particular current of wind or water. When they detect the current they need for navigation, they power back on, slip into the current, then power off again to conserve fuel as the current carries them to a target location.

In essence, they can go for a fact-gathering ride on hurricane winds and waters.

The devices are a departure from current technology, which uses hurricane reconnaissance aircraft to punch through a storm’s eye wall and release dropsondes, sensors that free-fall and might or might not collect helpful data. Underwater data are even more difficult to collect today, although just as important, considering that the warm, moist air on the ocean surface provides fuel for hurricanes.

Mohseni’s vehicles, even launched hundreds at a time, also reduce the cost of hurricane reconnaissance.

“If you want to blast through a hurricane, you have to build a bigger airplane,” Mohseni said. “[The military] asks for a Batman airplane, a super-duper aircraft that could do everything. But what if you lose one of these super-duper airplanes?

“We are going the opposite direction. We don’t have anything that is super duper. We have cheap sensors, but with a lot of them you can significantly increase the accuracy of your measurements,” said Mohseni, director of UF’s new Institute for Networked Autonomous Systems. “You get super duper on an aggregate level.”

The prototypes produced at the institute are about $250 apiece and are too small and lightweight to cause damage when they hit something, a big consideration in hurricane-force winds and waves. Mohseni does not use a landing strip to test the aerial vehicles; he just tells them to crash, picks them up and flies them again. The carbon fiber shell of the aerial vehicles is wafer-thin but resilient. With proper funding, Mohseni said, the vehicles could be tested in a real-world hurricane in two or three years.

In instances where many are lost — as in a hurricane — the data gained outweighs the cost of the lost vehicles, Mohseni said. Production costs would drop if the vehicles were mass-produced.

The vehicles also are smart. Mohseni developed a cooperative control algorithm that allows them to form a network and learn from the data they take in, for example, by adjusting their course when needed. This feature makes them useful for applications beyond hurricanes.

Extreme environments, such as the polar ice caps, are difficult and hazardous to measure with standard technology. Mohseni said heat transfer through polar ice between the ocean and the air goes almost completely unmeasured today but could be safely measured with the aerial vehicles, which can be launched from a laptop aboard a ship and send back climate data in real time.

Vehicles so tiny, powerful and smart would have been far-fetched even 10 years ago, Mohseni said, but advances in microfabrication, communications, computer processing and computation have led to sophisticated technology in small packages. Nevertheless, Mohseni also has drawn inspiration from seemingly less-sophisticated sources, such as jellyfish.

Mohseni had been studying fluid dynamics, working on propulsion, when a biologist mentioned that jellyfish navigate in much the same way as the mechanical system Mohseni wanted to develop. After studying jellyfish, cuttlefish and squid, Mohseni developed a mathematical model of their thrust and used that model to develop the motors for his underwater sensor vehicles. He now has small submarines capable of autonomous docking using technology mimicking jellyfish and squid, and the sea creatures are common fixtures in his laboratory.

“With biomimicry, learning from what nature does,” Mohseni said, “you just sort of get amazed.”