I've been an Arduplane fan for about 3 years now, starting with the APM 1 in a Skyfun and working my way up to an APM 2.6 in a Skywalker X8 complete with Cellular Telemetry over 3G.

I've never been into copters as much but I thought it was about time I checked out what all the buzz was about and share my experience here.

I bought a cheap quad online for $100 with the intention of learning to fly quads and wrecking a cheap one before letting loose on something a little more expensive.
After getting to the point where I could just about turn the thing inside out, I thought it was about time to upgrade.

I did a lot of research on the DJI vs 3DR and then looked at the Iris.
My thinking was that the Iris is a nice toy but its not really worked up for doing anything too serious, that left the Y6 or the X8 and I eventually decided to go all out and order myself an X8.

I also needed new radio gear as my old Hitec radio was showing its age so I added in a D7 radio, full telemetry kit, spares and a Gimbal all from 3DR to support the cause.

It went on back order with around 2 weeks after ordering before it shipped which was acceptable.

Then the fun began with shipping. For some reason the shipment got held up in Memphis. I left it for a few days then made a call to fedex who weren't much help.

Next I dropped a line to 3DR to see if there was anything they could do and after about a day to respond they managed to work some magic and the package began moving again. When the package finally arrived it had an "Opened by New Zealand Customs" sticker on it. This always makes me nervous as you half expect it won't get packed back in as well or that something would be damaged during the premature unboxing at customs.

Opening the box, I was a little surprised at the internal packaging, it wasn't exactly a stellar packing job given the journey that box had taken, however there is no way of knowing whether this was the way it was packed by 3DR or whether the re-pack at customs was less than stellar.

However the good news was that nothing was obviously broken and the copter itself was placed in such a way to minimize the chance of any breakages. The X8 itself had foam protecting the motors, plastic wrap over all aluminium parts to avoid scratches and one leg was folded in to maximize the space available in the packaging.

The first thing that strikes you about the copter is its size and weight. This is not a toy and everything is constructed with heavy duty components while minimizing weight.

The second thing that strikes you is the fact that if this thing goes down, due to its weight its going to be a write off.

Extreme care will be the order of the day when flying it. Its certainly no acrobatic machine and you can see how its size and weight lend itself perfectly as a camera ship.

There are also some nice touches that make it a true RTF option for someone who doesn't have the build capability to put together their own ship. The LiPo Guard pouch for charging the batteries is a great idea and the included charger while towards the bottom of the quality range is more than adequate for most needs. One thing that becomes apparent once you have everything laid out is the lack of things to actually put together. 3DR advertise this as a RTF kit which I was skeptical about and was expecting to spend at least a day building it, however it really is ready to fly with only minor assembly.

Nevertheless I took the time to check over the entire unit, tightening screws, applying loctite and double checking everything.

Connecting it to the mission planner was straight forward, and all the settings were dialed in and ready to go for the airframe. A firmware update was needed to bring it up to the latest version and because I am new to Pixhawk I had some head scratching before I discovered you need to press the safety button when loading firmware. 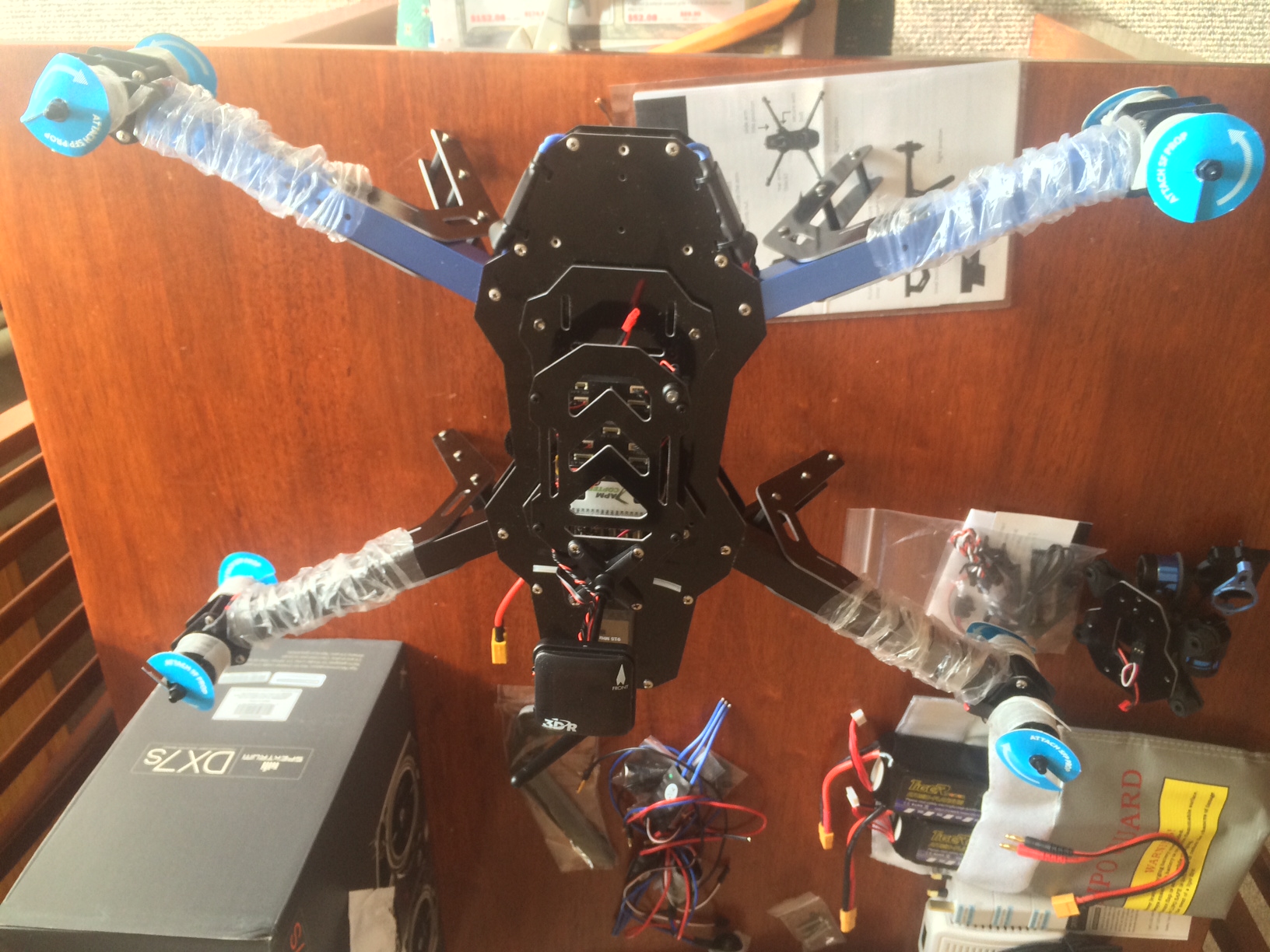 I decided to fly it without the Gimbal initially in case there were any mishaps.

Stabilize was as solid as a rock. I fully expected to spend the entire first flight battling to keep control of it while modifying PIDs, but it gently lifted off the ground and sat in the air perfectly stable.

Flicking it into Alt Hold mode yielded similarly successful results. I took it for a wee spin to test its responsiveness and was impressed by how rock solid this ship is.

I was feeling so confident about its performance so far I did a quick double check that it had GPS lock and then dropped it into Loiter and there it sat.

Since then I have dumped about 6 batteries through it and I continue to be impressed.

Next step was to add the gimble and take it for a spin with a GoPro.

This has been the hardest part of the whole process, tuning up the Tarot Gimbal can be quite a challenge and a novice would certainly struggle with it. It took me about 2 hours to get a nice smooth config. The settings I needed turned out to be completely different from some of the configs posted on the internet, however once its setup it really is a nice Gimbal.
I will post some shots from the GoPro once I take the X8 for a flight with the Gimbal attached.

In summary, the 3DR X8 2014 edition is a rock solid camera platform suitable for professional use.

It really is RTF but I would not recommend it to someone who has no experience either flying or with the APM. There are simply too many things one could get wrong that could dump this air-frame into the dirt.

This is the perfect system for someone that:

Hats off to everyone at 3DR, you continue to improve with leaps and bounds and credit where credit is due, the X8 is a formidable piece of machinery.