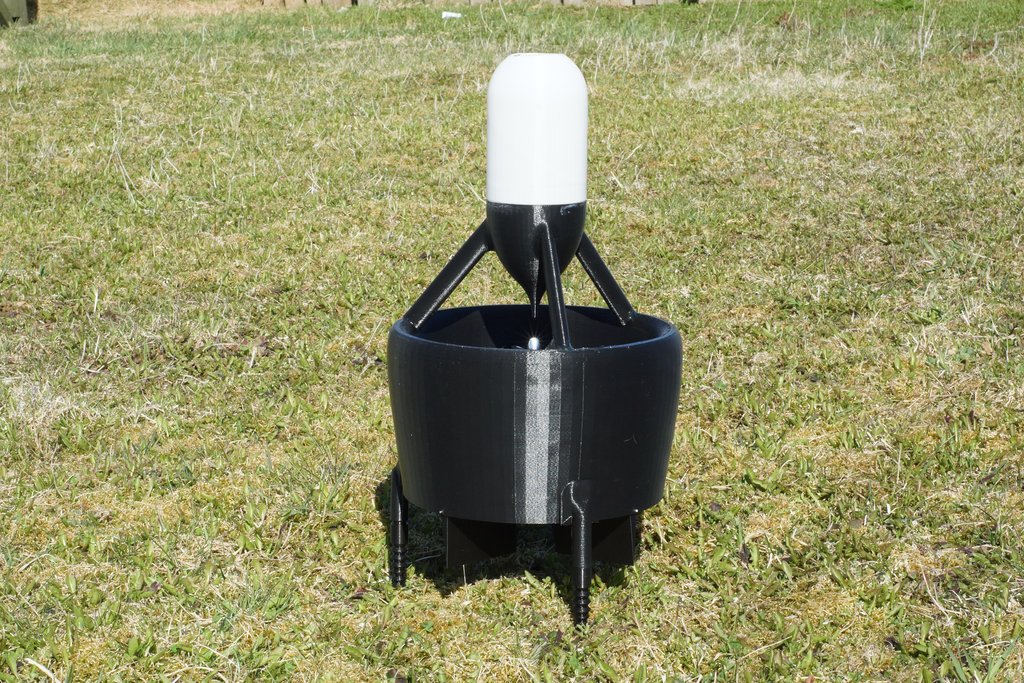 Though Ducted Fans UAVs as of now are not very common, my personal opinion is that this will change in the future, since they have certain advantages over other concepts. Just one single engine is necessary which makes the use of internal combustion engine more viable than for multi-rotors. Also a transition into a very efficient horizontal flight is possible (with modifications).

This is a project which started in 2001 as a Ducted Fan VTOL in a configuration where the centre of gravity is located beneath trust vectoring giving the  advantage of stability. Since there were no hobby autopilots available at the time, it was only equipped with one gyroscope and a mechanical mixer to control the vehicle around the vertical axis. The vehicle was destroyed on the first flight with minor success.

With the uprising of small accessible autopilots and increasing knowledge, the concept of this configuration was given up in favour to a concept with the centre of gravity above the control surfaces. The lack of time and the high effort to create relative complex moulds for composite sandwich parts and the parts themselves slowed down the progress. A new upcoming technology (3D printing) changed  this project again. 3D printing is perfect for complex shaped parts in low quantity. It is perfect for creating objects with surfaces curved in two directions (like on a duct). For a prototypes where the minimal weight is not primary, 3D printing might be the best solution such as with this project. I modified my CAD model of the Ducted Fan VTOL UAV for 3D printed plastic parts. I also built a 3D printer which fits my purpose with a built volume of 40cm diameter and 40cm height. 3D printing has further an advantage that mounting brackets and other small parts can be included in the structure.  In conventional building methods they are usually added in a later stage of fabrication. This reduces the time for mounting servos and other parts which can be a very time consuming task. In this prototype mountings for servos are already included in the structure. The control surfaces are directly connected to the servos and extremely light. Most of the structure consists of 0.35 mm (1/72”) to 0.5 mm (1/48”) thick walls with rips to stiffen it out.

Originally I had planned to equip the UAV with a self built autopilot. This autopilot is based on a Beagelbone as a processing unit connected via (real-time) Ethernet to a micro-controller which serves as an real-time interface between the sensors and actuators. This has the advantage that the processing unit can be exchanged according to the requirements by any other computer with a Ethernet port. The disadvantage is that compared to other available open source systems the developed system is in a very immature stadium. So I decided to use an autopilot based on the PX4 which I recently used for other projects and has a huge community. 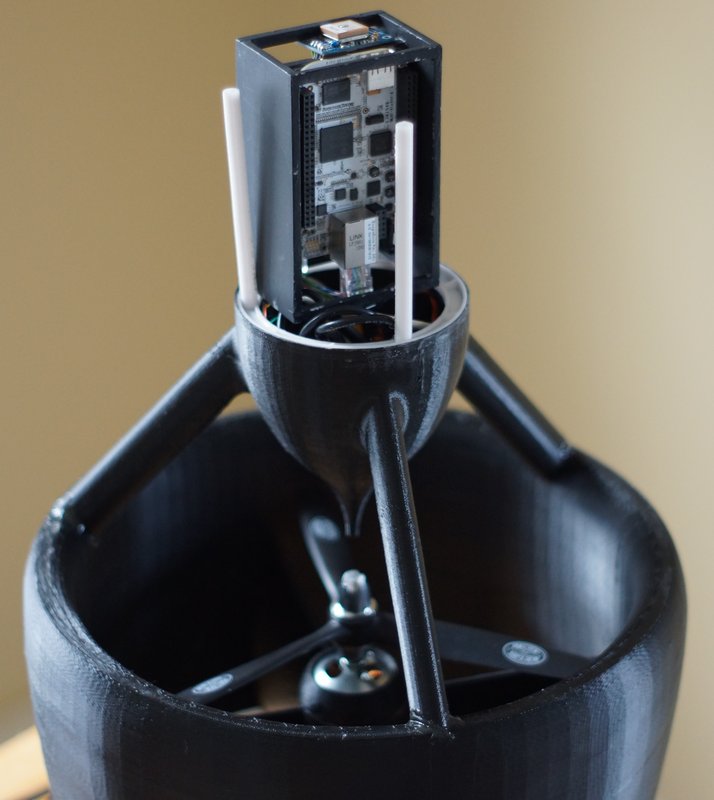 The UAV is powered by one 3 cell LiPo battery with 3500mAh. The outside diameter of the duct is 30cm (12”), the height is 55cm (22”) and the take-off weight is about 1.2kg (2.6 pound). It has not yet performed its first flight, but some bench tests have been conducted. The produced trust is sufficient, but no measurements have been taken so far. Also the stators together with the control surfaces do a great job in elimination the reaction forces form the motor. Wool threads were fitted to the stators inside the duct to see if any airflow separations occur, which would inevitably cause a loss of control. The same will be done for the inlet to see if any separation occur trough influences like wind gusts or extreme manoeuvres.

Once the missing parts arrive the next step will be a free test flight equipped with analysis equipment (threads on the inlet, outlet and the stators recorded by multiple cameras).  Together with the recording function of the autopilot this should maximize the information gain to improve any non perfect test flight. This will hopefully happen soon and I will give an update. Personally I can't imagine doing that kind of work anymore without a 3D printer. Even though the parts might be not perfect with a home made printer and composite materials might be more suitable, 3d printed (prototype) parts can greatly improve the manufacturing efficiency and let you concentrate on the task you really want to achieve. In my case it is to bring this Ducted Fan UAV into the air and modify it that way that it can be used as part of a fully automatic Unmanned Aerial System.

By fully automatic I mean a system which consists of a box which has a power- and internet connection which opens on command, the UAV takes off, fulfils its mission (possibly makes a transition into a efficient horizontal flight) lands fully automatic into the box ,and gets recharged or refuelled. This box can be located on the top of any building or tower or on a boat/vehicle. The user exclusively concentrates on the mission.

Currently I am looking for people who share similar interests for cooperation or collaboration. If you are interested or you know somebody who could be interested then feel free to contact me at: info (at) arminstrobel.com