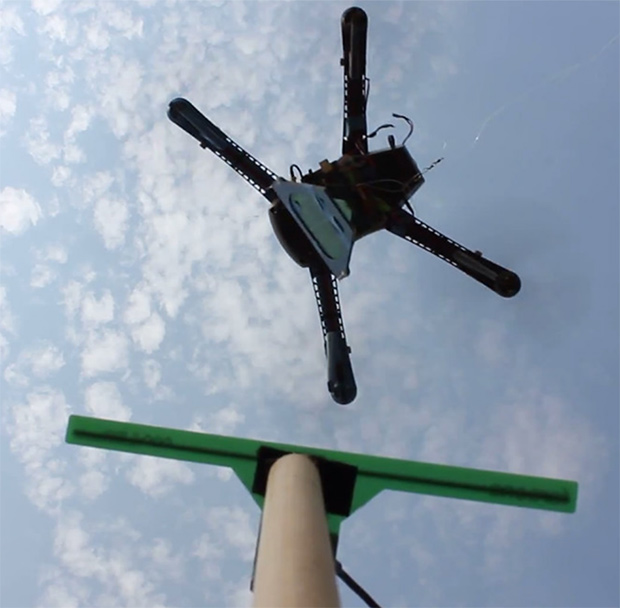 We live in California, and we’re trying to grow some food in a field, but we barely haveany water. In order to grow plants most efficiently, we’d want to be able to measure moisture levels in the soil to make sure that we’re not over or under watering. Assuming that we’re looking for a better solution than a human to walk around probing the soil all the time, we could try to have a mobile robot do the same thing, but that can be tricky and probably expensive. Another option might be to put sensors in the ground all around the field, but then you’ve got to buy the sensors, power them, and do some sort of fancy wireless thing to get them all reporting back.

In a paper recently posted on arXiv, a team of researchers has proposed a hybrid approach using long-range UHF RFID sensors that are dirt cheap and require no power source, combined with a mobile robot that can talk to them. Is it the best of both worlds? Yes. And does it work? Yes. It does. Maybe.

Radio-frequency identification (RFID) tags consist basically of a chip and an antenna. Most tags don’t have their own power source; instead, they’re powered by the radio frequency emissions from any antenna that tries to read the tag. Essentially, you get a free transmission of a small piece of information from an unpowered tag to a powered antenna, and this means that the tags themselves can be manufactured for next to nothing. By hooking UHF RFID tags up to low power sensors, you can collect a little bit of data and transmit it to a nearby antenna whenever that antenna is in close enough range to power the RFID and sensor.

The researchers (Jennifer Wang from MIT, Erik Schluntz from Harvard,Brian Otis from UW, and Travis Deyle from Duke) show how a mobile robot could zip around and remotely read a whole bunch of these ridiculously cheap RFID sensors spread over a wide area, giving you an outdoor Internet of Things that you can quickly deploy and will cost less than other approaches. This is a picture [right, top] of what one of these UHF RFID tags looks like. The tag shown here would cost less than US $0.10 at scale, and can operate indefinitely. Compared to something based around a system like Bluetooth Low Energy, RFID is at least an order of magnitude cheaper, potentially way smaller, and will probably operate much, much longer. The entire sensing system (including the resistance probe) might run you about $1, in volume.

Once you’ve got your pile of cheap RFID sensors, here’s how the system would work: you walk around and stick them in your field wherever data would be useful [right, middle]. You only have to do this once, and you can place a whole bunch of sensors, because of their low cost. As you place each one, simply note its GPS coordinates. To do some data collection, pick your mobile robot of choice (the researchers used both a quadrotor with an antenna mounted underneath and a RC car modified to work as a UGV), and have it wander around to all of those GPS coordinates. When it ends up at one, it activates its antenna, and the RFID tag on the ground sends back data [right, bottom].

How well does this technique work? In technical terms, it works pretty well, but developing it further into a commercial system would require some improvements. The challenge in reading a passive UHF RFID sensor tag is that your antenna has to be positioned fairly close to the tag: in the configuration that the researchers used, the best case read distance was about 1.3 meters, which is well within the position error of a standard GPS system. Also, the tags have to charge up with power for some time (a second or two) before they’re able to transmit any data, so you can’t just zip past them and expect to pick up a measurement. Consequently, their quadrotor wasn’t able to autonomously read any of the tags, although the team managed to get reads on all of them under manual control. The UGV fared better, partially because the antenna was positioned at a favorable height. Based on autonomous GPS waypoint navigation, the UGV nailed two-thirds of the tags.

The researchers say that both challenges (power and range) may be solved as RFID technology improves. In fact, the RFID tags already used in some highway toll systems can charge you money even if you drive by them at 10 mph over the speed limit. Solving these issues, however, wasn’t within the scope of this research, and a lot of other research has been done on how to make robots navigate between waypoints more accurately. Since both of the mobile robots were able to read all of the UHF RFID tags while being manually controlled, the point is that the system has been shown to be useful and viable, even though the navigation bit still needs to be figured out.

Apart from just sensing tags, mobile robots can also place tags, and since the tags don’t require any infrastructure (batteries or WiFi or whatever), you can stick them (or drop them) anywhere you think they’ll do the most good. At ten cents a tag, this is where the Internet of Things starts to become really, really powerful: through a dirt cheap, scalable, infrastructure-free way of adding sensors to the world with robots.