An Autopilot in the clouds - part 5 This article is part five in a series, describing some of the inner workings of an autopilot system - even though the description is specific for this particular system, a lot of principles are generic and can be used to describe a variety of auto pilot systems.

Today we’ll look at building the electronics for the new UAV (the UTV-1) incorporating some lessons learned from the smaller UTV-3.

If you’ve read the previous posts you’ll know that I’ve been working on an Autopilot with an architecture that allows the platform to run several instances of the autopilot and separate the autopilot from the airframe. This allows rapid testing and the potential to have central computer system that coordinates several drones in a join effort to solve a task.

So far the tests have been conducted on a relative small airframe, which only allowed the basic hardware and the autopilot computer to be ground based. This allowed a lot of concepts to be tested and paved the way for the next test vehicle.

The airframe will be the Zeta Science Phantom 61 - It’s very familiar with the z-84 which was used for the small test vehicle. Now we need to figure out what to stuff in the airframe and how.

The current test vehicle was build only to test the basic concepts and software. The new vehicle will host some sensors and a computer that can analyse the collected data in real time. To experiment with this aspect, the airframe will be fitted with two downward facing cameras - one regular and one with the filter removed (a simple NIR camera) and two gas sensors. The place I do testing is close to some waste dumps etc, so it would be interesting to analyse the surroundings and map gas concentration to a map.

Flying up here can be a wet experience and even the most gentle landing will get your plane wet. I had a few incidents that was probably caused by electronics meeting water. In this vehicle we want to bring a computing platform (an adapteva parallella or a raspberry pi), and other delicate equipment that should be protected from the elements. That means that some electronics will be fitted inside an enclosure, that can shield it somewhat from the elements. The “somewhat” implies that we don’t want 100% water tight shielding since some sensors need to be exposed to the outside pressure and temperature - namely the IMU with the barometer sensor and the two gas sensors used to analyse the air quality.

Arduino nano 32u for analog input and processing

2x UBEC - 3 amps for power to the systems

Even though we work with two enclosures, we still want the modularity of the complete package, which allows us to test most of the setup outside the actual airframe. Since there are some links between the two enclosures, both are mounted on the same base plate which allows easy interconnection and testing (a test rig)

Each enclosure has it’s own UBEC that supplies power.

One enclosure houses all sensors (not counting the two cameras) including the two gas sensors. It is seen to that the enclosure is naturally ventilated, to make sure the outside air can get in. 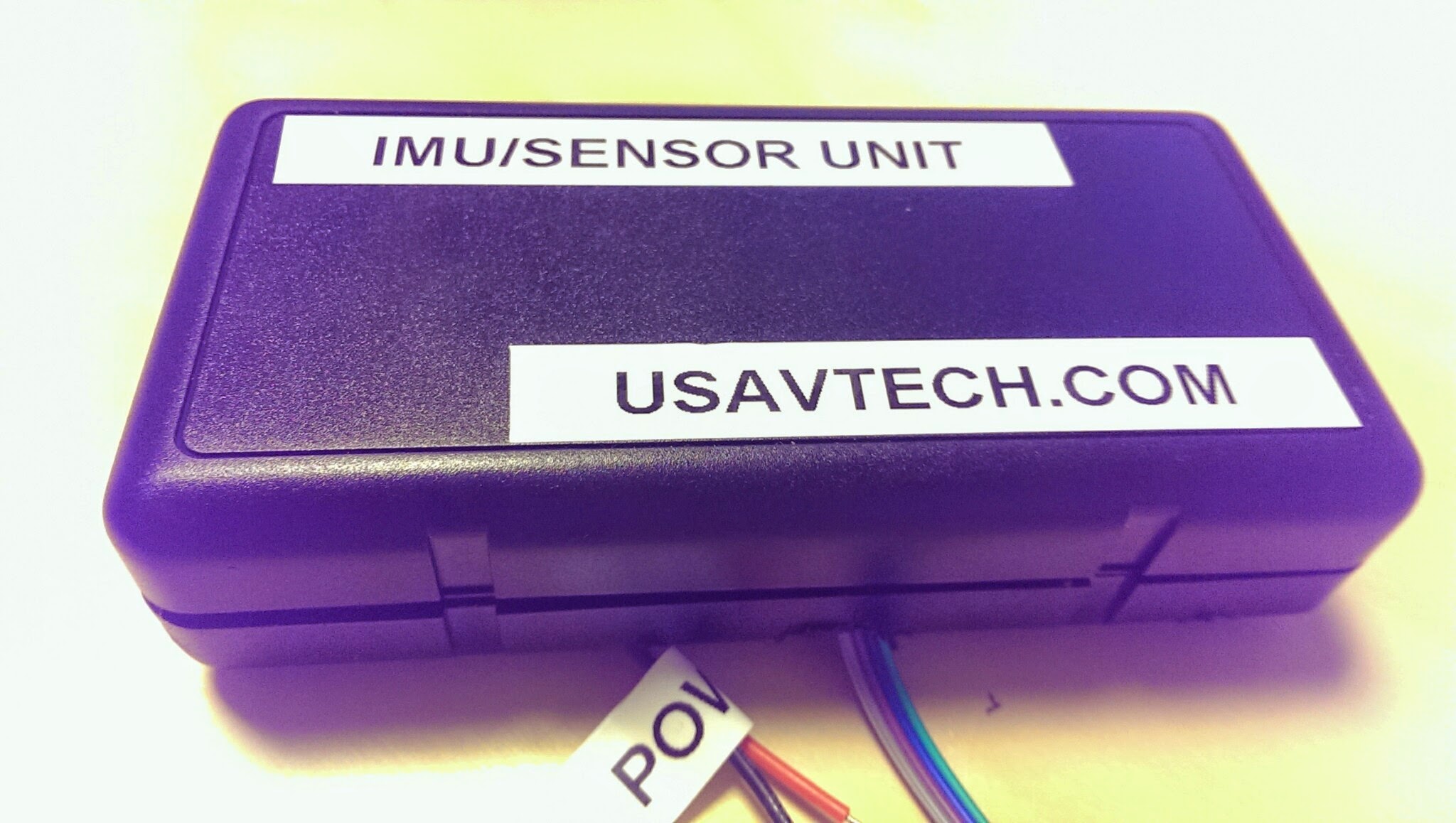 Everything inside is marked with labels, and fastened with vibration dampening pads. 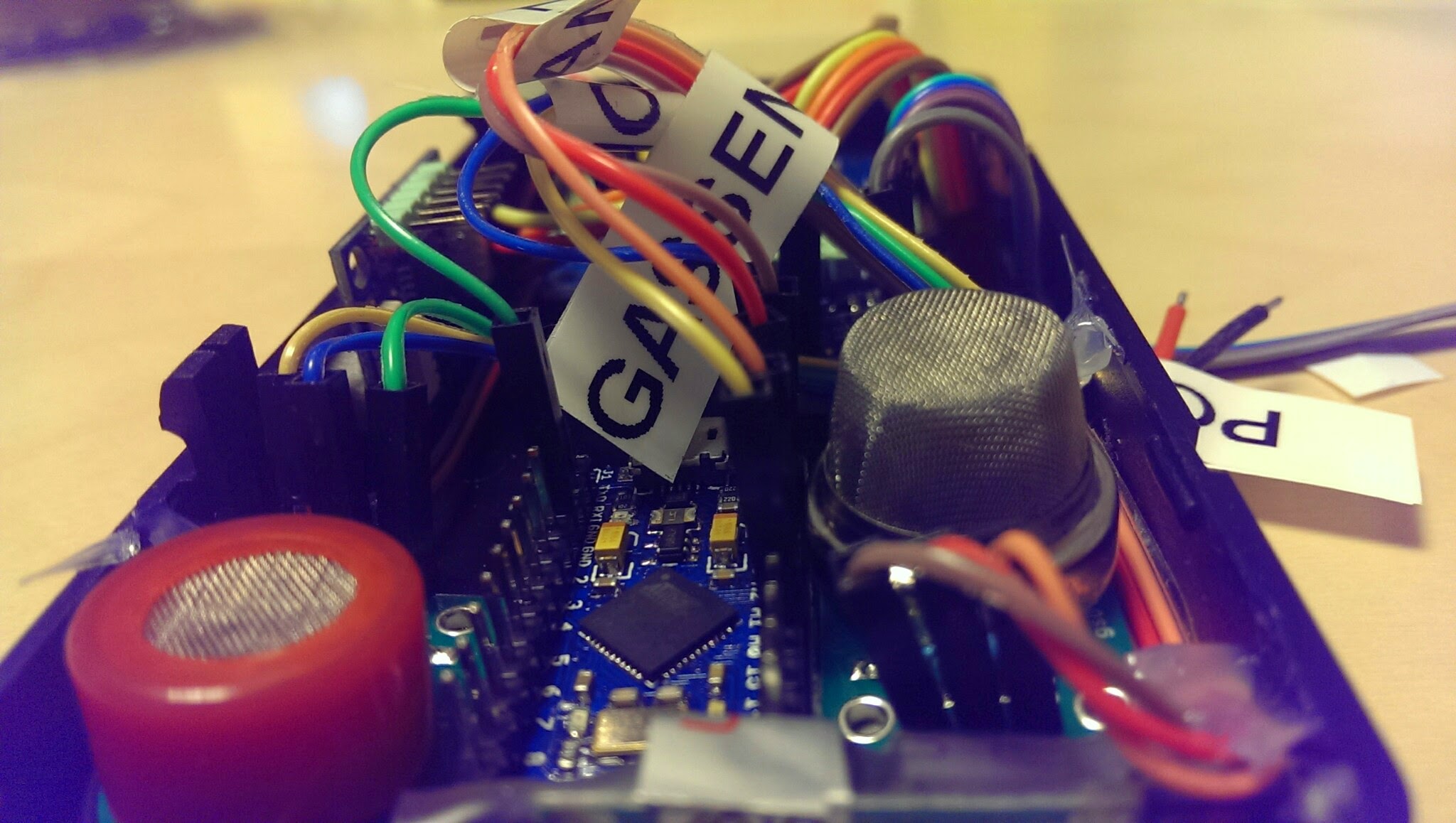 The two gas sensors have built in heaters that needs to be on for at least 60 seconds before good measurements can be made. Sensors is connected to a 32u based Arduino with 10 bit resolution. The final enclosure will also host an analog accelerometer that will measure the vibration of the enclosure and the craft, which can be monitored from the ground. The watchdog system will also monitor for large vibrations through this sensor and will warn if the ride starts getting bumpy.

So test out the enclosure with the sensors, I attached the enclosure to my car and drove out to the dirt-processing plant close to the place I conduct my testing. It was very pleasing to see some quite big “peaks” while passing a certain place. Below we see the two peaks (a bit left from the middle) as a result as passing a certain location, turn around and drive past it again.

Without calibrating the sensors we can’t say exactly how much Monoxide and Methane we measure, just that we see more some places than others. For now thats okay, it proves that the gas sensing unit works and is able to measure differences in gas levels with a strong airflow going through the enclosure.

Next post will be about the complete test rig, that in the end will be fitted in the craft. With all the features of the electronics some extensive testing is needed. Also, power measurements, stability and so forth is essential to uncover before placing the electronics on the airframe.