Antennas now has its own section in the Forums 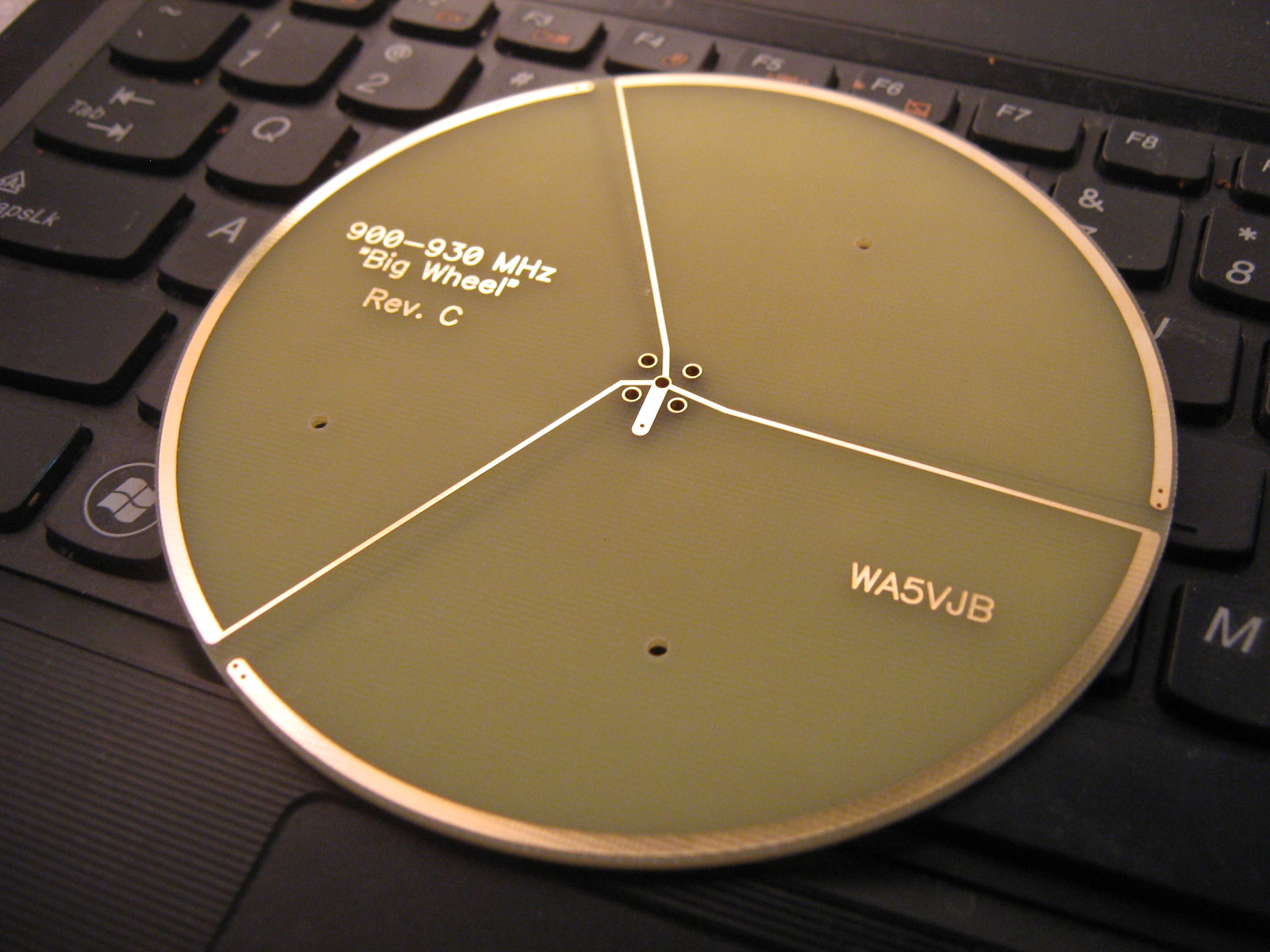 There are alternative antenna choices for your UAV when space is a consideration. RHCP antennas are without doubt one of the best choices you can make for your video and telemetry signals. I had wanted to use a RHCP antenna for telemetry for my X-8 but the choices I had come across were pretty space demanding. Surfing the web doing some antenna research I ran across these wheel antennas from Kent Britain WA5VJB, a fellow amateur radio operator. www.wa5vjb.com  He's got some really useful designs other than the wheel.
I purchased 2 of the 900 mhz variety for the telemetry, one for in the X8 and one for the ground station . Since the plan is to install all antennas within the X8 these are a great space saving choice over the current offering of cloverleaf antennas. The 900 mhz wheels measure about 4.5 inches in diameter, somewhat smaller than a CD ROM and only slightly thicker. The best part being they are only $ 12.00 each. They can be fed with coax directly or as seen in the photograph you can solder a circuit board SMA connector of your choice to the center in the holes provided.
These wheel antennas are considered to be horizontally polarized at the plane of the horizon however as your UAV gains altitude the wheel antenna emits a cross polarized signal. Here is a quote from hamtv.com “Around 1990 the first launch of a balloon borne payload in the Denver, Colorado Area took place sporting a Little Wheel as the radiator for the on-board ATV transmitter. It was found to work quite well and had some interesting attributes that were previously undisclosed. Those being that the Wheel antenna although being a horizontal radiator on the horizon displayed properties of cross polarization above and below the array - similar to two in phase horizontal dipoles. This worked to the advantage of the ground station by employing a circularly polarized antenna (Helix) - also a fixed horizontal antenna directly below at the launch site would not see the up to -30 dB nulls as the balloon rotated. The horizontally polarized tracking antennas (Yagis) were receiving a signal of constantly changing polarity as the payload rose to an altitude at which it would start to drift away from the launch site and the horizontally polarized tracking antennas would become more effective due to the horizontal polarization emitted from the sides of the Wheel. The pattern of the Wheel is within +/-0.5dB of being a perfect circle in the E-plane. In the H-plane the pattern is +/-35 degrees of the horizontal axis of the antenna. These figures equate to ~ 4.28 dBic gain or 6.38 dBdc. The dBic gain above and below the array is somewhat indeterminable due to the fact that the circular polarization exhibited is quasi-circular or cross polarized; however, it responds to a Helix in a manner consistent with the gain of a pair of like sense Helices in a system looking at one another. ”

This antenna does radiate well (60% efficient) and also radiates well in the second and third harmonics so take precautions to provide filtering for your transmitter.
You’ll want to use a “Wheel” antenna on each side of your link as losses will result if mated to just a dipole when your UAV is overhead. Just mount it in a horizontal position at each end of the link. If it fits inside your UAV that’s great but it could also be mounted flat on the wing as well. 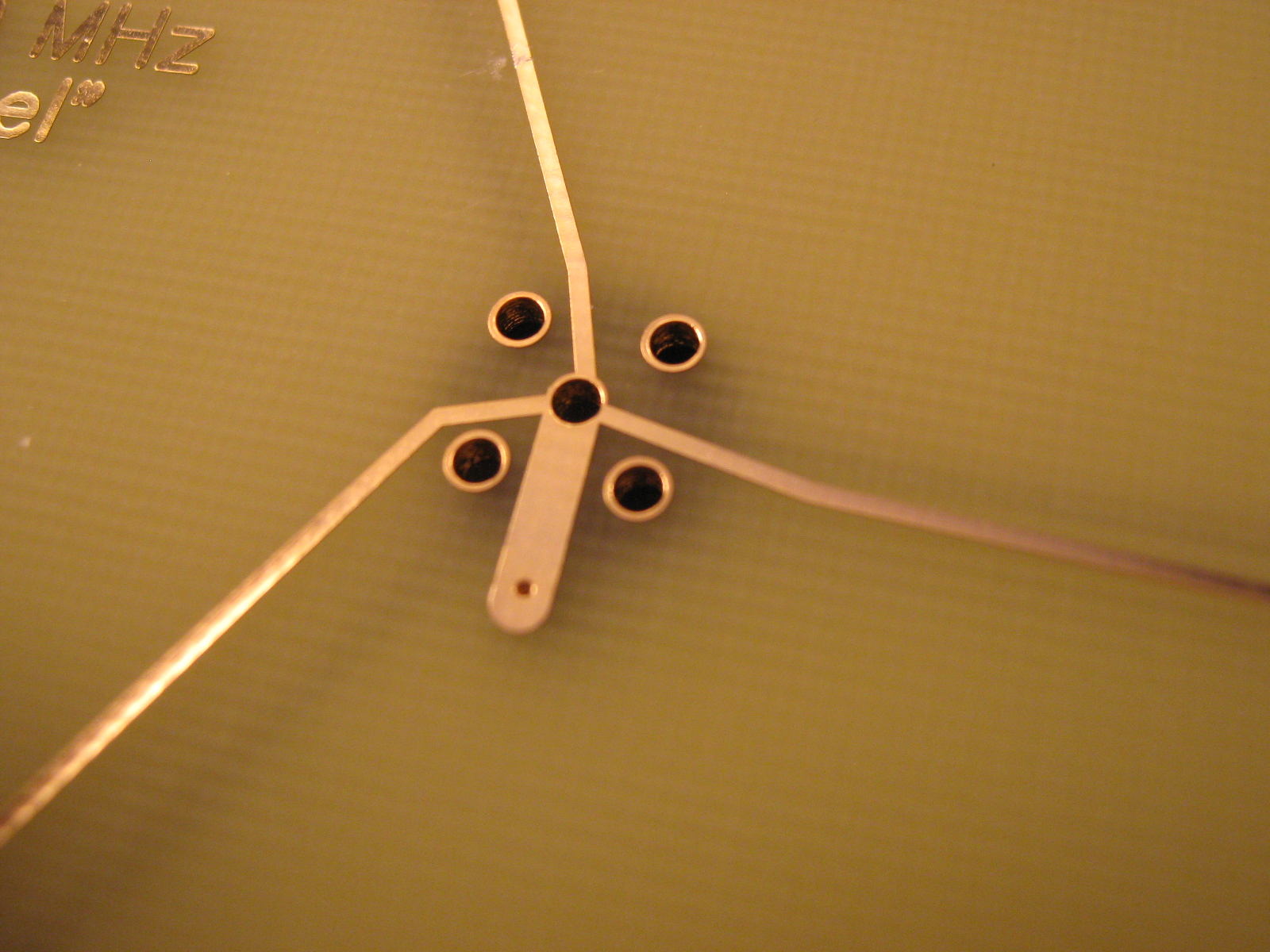 Holes are provided for SMA circuit board jack mount
or direct connection to coax.

This link shows the antenna being tested in a 3D pattern.

i'll post my actual installation once I get there.

Keep experimenting with radio, get your tech license, it's easy and you'll be contributing not only to this great hobby but ham radio as well.