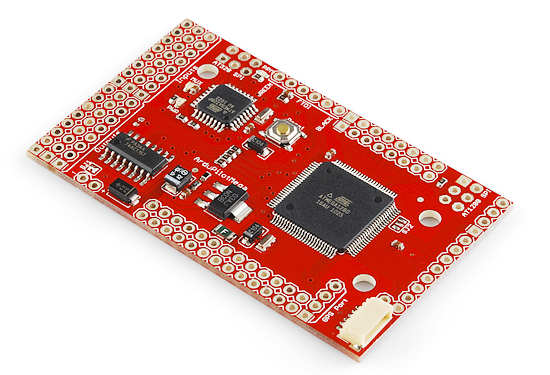 As you know, earlier this year we released the latest version of APM, the APM2560 board, which has twice as much memory as the older APM1280 boards. This was to allow us to continue to add features and functionality to the ArdupilotMega and ArduCopter code without running into the memory limits of the older 1280.

The dev teams worked hard to maintain seamless compatibility with the older boards, which has proven successful. So, for example, if you use the Mission Planner to upload your firmware, it autodetects which board you've got and loads the right firmware. And the two boards are 100% plug compatible. There are countless other tweaks in the background to make that migration seamless, and it's worked well.

In the meantime, the dev teams have been doing just what they promised in adding cool new stuff and both the ArdupilotMega and ArduCopter code have matured tremendously both in terms of performance and features over the past few months. The result, however, is that we are now nearly out of memory on the 1280 boards and development must shift to the APM2560 board to take advantage of its additional capacity.

Our plan is to, in the next few weeks, release a "final" stable and full-featured version of both the APM and AC2 code that supports both the APM1280 and APM2560 boards. (The code versions will probably be 2.3 for APM and 2.0 [non beta] for AC2). After that, future versions of both code bases will be APM2560-only.The final 1280-compatible code will represent the state-of-the-art of APM software as of mid-2011 and reflects three years of learning and work. So it will be very good indeed. But further innovation will move to the 2560 boards.

If you have an APM1280 board, you can be assured that it will continue to work great and we will continue to support that final code version for a good long time, making bug fixes where necessary. If you're happy with it, you can use it as is for years.

But if you'd like to continue to evolve with the project and participate in the continual process of adding new features and improving performance after our cut-off date later this summer, you'll need an APM2560 board (don't forget to add a couple strips of breakaway headers, too, if you don't already have them).  Please note that there is no need to upgrade your IMU shield; it works equally well with both boards. Indeed, this is the reason we made APM modular, so people could upgrade one component without losing their investment in the other. And the good news is that the base processor board is by far the cheaper of the two!

You'll note that this generation shift is right on schedule in our product release cycle. If you look back at our history, we tend to release new hardware versions every six months (dating all the way back to the original ArduPilot board, two and half years ago). As new processors and better sensors become available, we work as fast as we can to make them available to the community, and the pace of that isn't slowing down. We try to maintain at least six months of backwards compatibility, and support older hardware for about a year after we stop making it. (We're no longer making the original ArduPilot, for example, but will continue to support it until the end of the year).

Going forward, you should expect this six-month pace of hardware releases to continue. If you'd rather not be on a continual learning curve, you can always choose not to upgrade (or go with commercial autopilots, which evolve much more slowly). But the spirit of DIY Drones is constant learning, experimentation and innovation. These are early days yet in the UAV world, and we've just gotten started with all the cool things we want to roll out. Thanks for joining us in the spirit of this collective adventure and exploration of the future of aerial robotics.