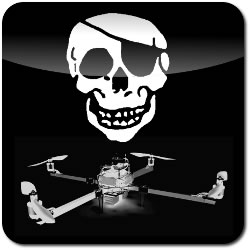 Just a quick announcement that the ArduCopter project has been boarded by (friendly) pirates! The "ArduPirates" refers to a great group of quad hackers over on RC Groups who have been making many useful additions and fixes to official ArduCopter code. Now that the ArduCopter team has released the "NG" branch as ArduCopter RC2 and is moving on to the next version (code named ArduCopter Mega, or ACM) that's built on the mature ArduPilot Mega codebase, we've asked the ArduPirates to take over further development of NG. They've already made great leaps, and you can expect lot of energy and innovation there.

As ArduPirates NG versions are tested and documented, we'll release them as official ArduCopter releases as zip files on the official site.

So going forward, once ACM is released, there will be two well-maintained codebases to chose from. They'll share the same core libraries, so you can be confident in core functionality. But they have different "flavors" and styles, and hopefully lead to healthy cross-fertilization.

Please see this post by Norbert Machinek (Captain of the Pirates) for more details.