This tiny drone is able to do completely automatic flights, it can perform altitude hold (based on sonar sensor) and obstacle avoiding based on IR distance sensors (you could see the "black stange eyes" on the photo). It´s your personal droid...

Look at the video (the "tennis game" part it´s funny. Thanks to Ramon for the idea!!)

There are some new features in this thrid part... This is the list:

- Position hold based on GPS

- Altitude hold based on Sonar (LV-EZ0)

- Added XBee for telemetry (and debug)

And some improvements in the code: 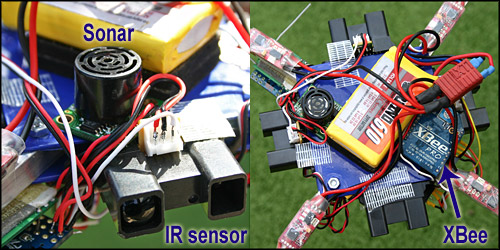 For the GPS position hold I had to implement the navigation algorithms for the quadcopter because it´s really different that the one used for planes...For this navigation it´s necesary to have the magnetometer to cancel the yaw drift in hover conditions. One thing I have observed is that you can only fly this tiny drone on very calm days because it´s too light for the wind... so it´s better suitted as an indoor drone. Then I started to think how to make a cheap way to navigate on indoor enviroments... I have one sharp IR disntace sensor so I start making some tests mounting the sensor in a servo to make a 180º scan. The idea was to mount 2 (or 4) of this sensors in the moving head.
On the tests I found that in this little machine the moving head caused some inestability, so I decided to mount 4 sensors in a fixed way. OK, this the cheap DIY version of an EXPENSIVE laser range finder, but it works...
there are many thing to improve and test, but it´s a promising start...

Sonar module is an LV-EZ0. Because we don´t have any analog input available I use the PWM interface in a Port Change pin (PCINT20) to use an interrupt to read the sensor. (It´s recommended some solder skills to make this modification). For the IR range finder (Sharp GP2Y0A02) I needed to use a separate Arduino Pro mini (again we don´t have any analog input free). This module connects to the ArduIMU via Serial port so we need to choose between GPS of range finder (outdoor-indoor decision).

On this III part, the hardware (ArduIMU) really show it´s limits... it´s not a problem of CPU power, it´s a problem of the limited I/O as I said before, so it´s time to move to the big brother, the new ArduPilot Mega Hardware... this new platform will be fantastic for this projects...

During the test of position hold I have some crashes (nothing important, only some broken propellers...) and there was a moment in that the quad performs not so good, so I start searching the reason. Again I suspect that it could be a vibrations problem so I decided to make a modified code to test the vibration on each motor.

As you can see I have problems on left motor, so I change this prop, also add a new layer of doubled sided foam tape to the ArduIMU and problem gone.

The code is here: Quad1_mini_test_motor_vibrations.zip (If you want to use it read the instrucctions)

Respect to the IR distance sensor, the first version was a moving head with a servo but this had some problems with vibrations that affect stability and also has a poor scanning rate, here is a photo of this prototype. Finally I decided to use 4 fixed sensors. 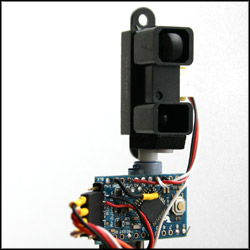 Some parts of this codes are still experimental but you can get it here:

Old posts of this project: http://www.diydrones.com/profiles/blogs/arduimu-quadcopter-part-ii