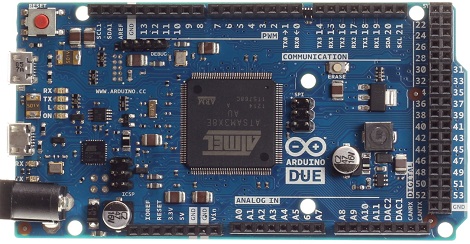 After a years-long wait, an ARM powered Arduino is finally due. The Arduino Due will finally be released this coming Monday.

On board the Arduino Due is an Atmel-sourced ARM Cortex M3 microcontroller running at 84 MHz. The Due has an impressive list of features including a USB 2.0 host, compatibility with the Android ADK (lest you still need an IOIO), 12 analog inputs with 12-bit resolution, 2 analog outputs running at 12 bits, a CAN interface, and more input pins than you can shake a stick at.

For a full list of features, you can grab this PDF we picked up when we saw the Due at Maker Faire NYC

This hardware update to the Arduino platform makes a lot of very cool builds very possible for even the beginner hardware hacker. Of course the Due will be used for controlling drones and UAVs, laser cutters and 3D printers, and playing WAV files from the analog outputs. The much improved hardware opens up a lot of other possible builds including making your own guitar pedals – DSP is a wonderful thing – and reading the telemetry from your car in real-time via the CAN bus.

Although it’s not available right now, you will be able to buy an Arduino Due for $49 USD this coming Monday at your favorite electronics retailers.

The ArduCopter/ArduPlane team is currently focused on porting the code to our PX4 board, which is based on a much faster and more capable ARM chip than the DUE and has other cool stuff like a RTOS already up and running. But one of the cool things about the Arduino DUE release is that includes some improvements to the Arduino IDE to support a wider range of hardware. So our near-term priority will be to see if the Arduino IDE can be modified to support PX4, which will allow us to retain the accessibility of Arduino without having to support two different ARM-based hardware platforms.