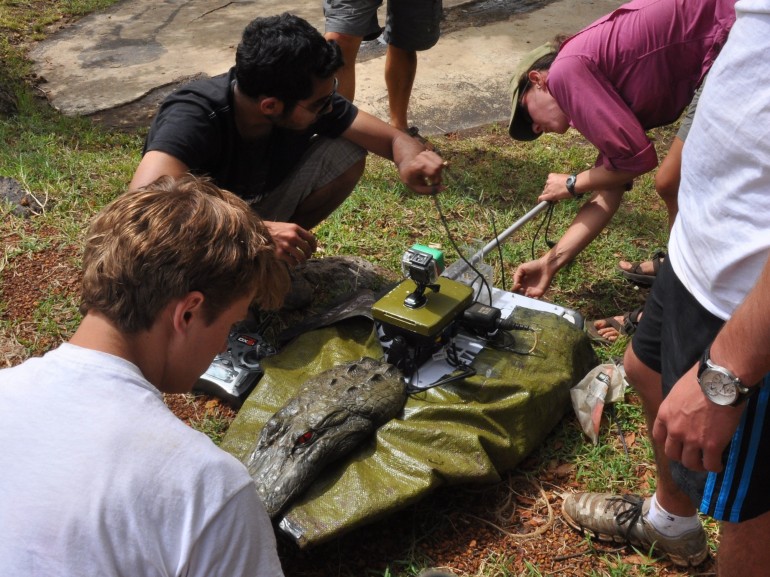 Although hippos may look slow and docile, they're actually very aggressive, killing more people every year than any other large African animal. So, it would follow that you wouldn't want to swim anywhere near them. That's why when researchers from Yale University and the Cary Institute of Ecosystem Studies wanted to study the effects of hippo dung on water quality in Kenya's Mara River, they sent in three autonomous air boats instead of people. To help those boats blend in, they were dressed up as crocodiles.

There are an estimated 4,000 hippopotami living in the Mara, each one depositing about 22 lb (10 kg) of feces in the river every day. When flow rates are high, that dung is simply flushed downstream and dispersed. At lower flow rates, however, it sits on the bottom and is fed on by bacteria, which also consume much of the water's oxygen content.

When flow rates rise again, oxygen levels downstream from the hippo pools can also suddenly drop, sometimes resulting in massive fish die-offs. Although it's suspected that this is due to the decaying dung being carried to those areas, the theory has never been confirmed. That's where the Lutra airboats came in.

Manufactured by Carnegie Mellon University spin-off company Platypus, the vacuum-formed plastic boats are two feet long (0.6 m) and weigh 13 lb (6 kg). Equipped with Android smartphone processors, they're able to navigate waterways autonomously while using onboard sensors to analyze water properties such as temperature, oxygen content and electrical conductivity. They also have sonar sensors, which they used to create depth maps of the pools, and to document the location and depth of hippo feces.

In order to minimize the chances of the animals attacking the boats, a local Maasai guide suggested that they be disguised as crocodiles. The approach seemed to work for the most part, with the exception of one occasion on which a hippo unsuccessfully attempted to chase down one of the watercraft. You can watch it in the video below.

Although the researchers are still analyzing the data, they're hopeful that the study will provide valuable insights on the role that hippos play in the water quality of the river.