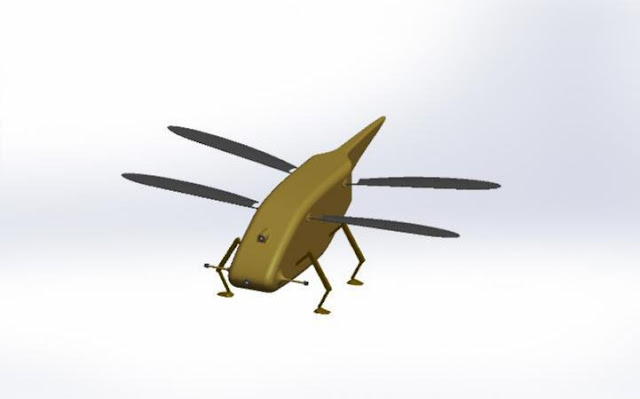 Britain will spend more than £800million funding next-generation military technology including tiny "dragonfly drones" for gathering intelligence and laser weapons to eliminate missiles.
Michael Fallon, the Defence Secretary, will today announce an innovation unit which will encourage individuals and companies to pitch ideas to a panel of experts. The best ideas will be fast-tracked with the support of an £800million fund over the next decade.

Projects which will be funded include a "micro-drone" with tiny flapping wings inspired by the biology of a dragon fly, which could have a "huge impact" on operations in urban environments.

It weighs less than two pound coins, is less than five inches long and will be able to fly at speeds of up to 45mph. The drone, which has been developed by a company called Animal Dynamics in Oxford, will be equipped with a camera and a microphone enabling it to carry out covert surveillance.

The unit will also fund new "Quantum Gravimeter" which is being developed with the University of Birmingham to survey underground structures.

Michael Fallon, the Defence Secretary, said: "This new approach will help to keep Britain safe while supporting our economy, with our brightest brains keeping us ahead of our adversaries.

“Backed by a defence budget that will rise every year until the end of the decade, it will ensure that the UK maintains its military advantage in an increasingly dangerous world.” 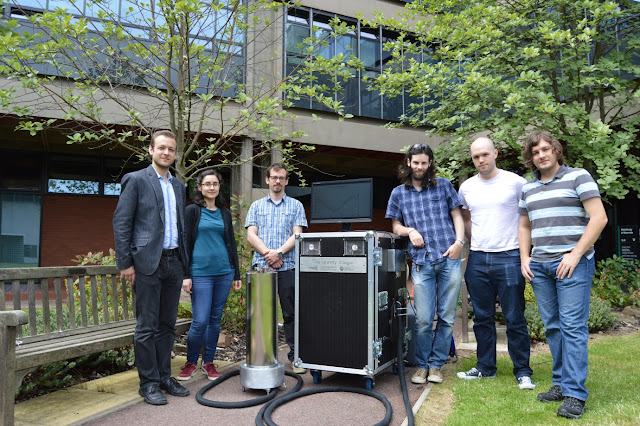 The Gravity Sensing team from the University of Birmingham has made successful outdoor measurements with their quantum gravimeter for the first time. The quantum gravimeter, designed and built in the labs at Birmingham, represents a significant step forward in developing robust quantum technologies for use in real-world environments. The technique of gravity mapping is already used by civil engineers for carrying out surveys – such as on brownfield sites – and detecting underground features. The Gravity Imager is intended to provide higher sensitivity and reliability for such applications, while also drastically reducing measurement time through enhancing the robustness to external noise sources. These first outdoor measurements of gravity represent a step along the way to starting full field trials.

The iSense project aims to bring the latest developments in ultracold atom science to practical applications by developing the technology that will turn laboratory-based instrumentation into portable and robust instruments and sensors. One most attractive application of such instruments would be to create a very compact, highly sensitive gravimeter, which is one long term goal of the Project. 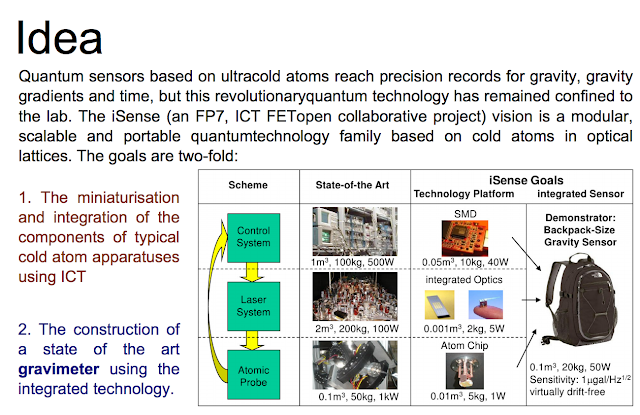 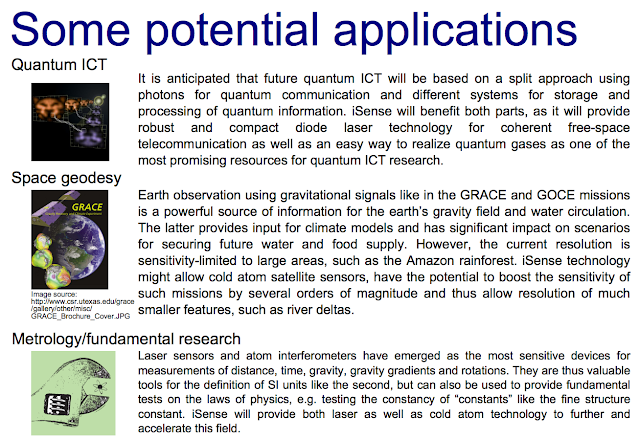 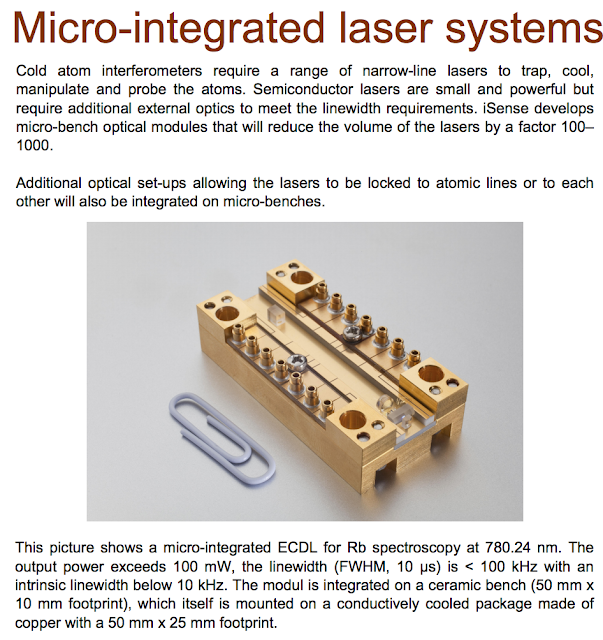 The vision behind this project is to unleash the power of high-precision quantum sensors in a wide range of science and technology applications. In terms of fundamental science a precise force sensor based on the proposed technology would be designed and fabricated enabling a crucial step forward in detailed investigations of the Casimir force, or a search for deviations from Newtonian gravity. It would also be a tool for space missions, where compact, low power, ultra-high precision investigation of the local space-time manifold is required, or indeed where a distributed network of such sensors would be appropriate. The absence of local gravitational “noise” has the potential to achieve significantly higher sensitivity. All these scientific applications would provide extremely sensitive fundamental tests of our current theoretical framework in physics where small deviations from theory would be revolutionary.

Gravity sensors are already used in geodesy (e.g. ocean circulation, water balances, Antarctic ice levels, magma flows, etc), in the exploration of resources (location of scarce minerals, oil fields, etc) and archaeology (non-destructive mapping of sites and location of intact caverns). The improvements in precision and robustness offered by the quantum force sensor targeted in this proposal would not only make these applications more routine but offer completely new possibilities, e.g. the location and extraction of fragmented oil bubbles in current oil fields (potentially increasing the fraction of oil captured from today’s typical 40%). Other applications include the temporal supervision of carbon storage sites and monitoring of ground water, snow and soil moisture to improve climate models and our understanding of the global ecosystem.

In the longer term we anticipate novel communications paradigms (e.g. ultra wide band network timing) using a quantum-based position-time grid that would not require GPS, and exceed its accuracy by orders of magnitude. Further applications would become apparent as the technology develops, e.g. atom-based quantum information technology including computing and secure communications for a range of purposes including global trade exchange.

The technological breakthrough of transferring and adapting ICT into laser systems for cold atom preparation and control is the key essential and challenging step towards achieving these long term visions, as all rely on precise control of coherent, laser-generated photon fields and precision pulses. Laser systems based on integrated optics would not only be significantly more compact than standard laser technology but would also offer superior stability, adaptability and control, which will be crucial for precision measurements as well as quantum gate operations.

Gravimeter on a chip

The University of Glasgow have built a gravimeter on a chip that could offer a simple, compact and low-cost way of measuring gravity. The chip uses a microelectromechanical system (MEMS) that is similar to that used in accelerometers, which are ubiquitous in smartphones. However, the new device is about 1000 times more sensitive to accelerations than the devices found in consumer electronics.

The device has a sensitivity that is about ten times worse than the best commercial devices. According to the team, the device is still sensitive enough to detect a tunnel of cross-sectional area 2 m2 at a depth of 2 meters, and could be used to find an oil reservoir with a volume of 50 cubic meters at a depth of 150 meters.

The team is now working with a geological-survey company to develop a portable gravimeter that can be tested in the field. While the current design only measures acceleration in one direction, the physicists plan to create a device that works in 3D.