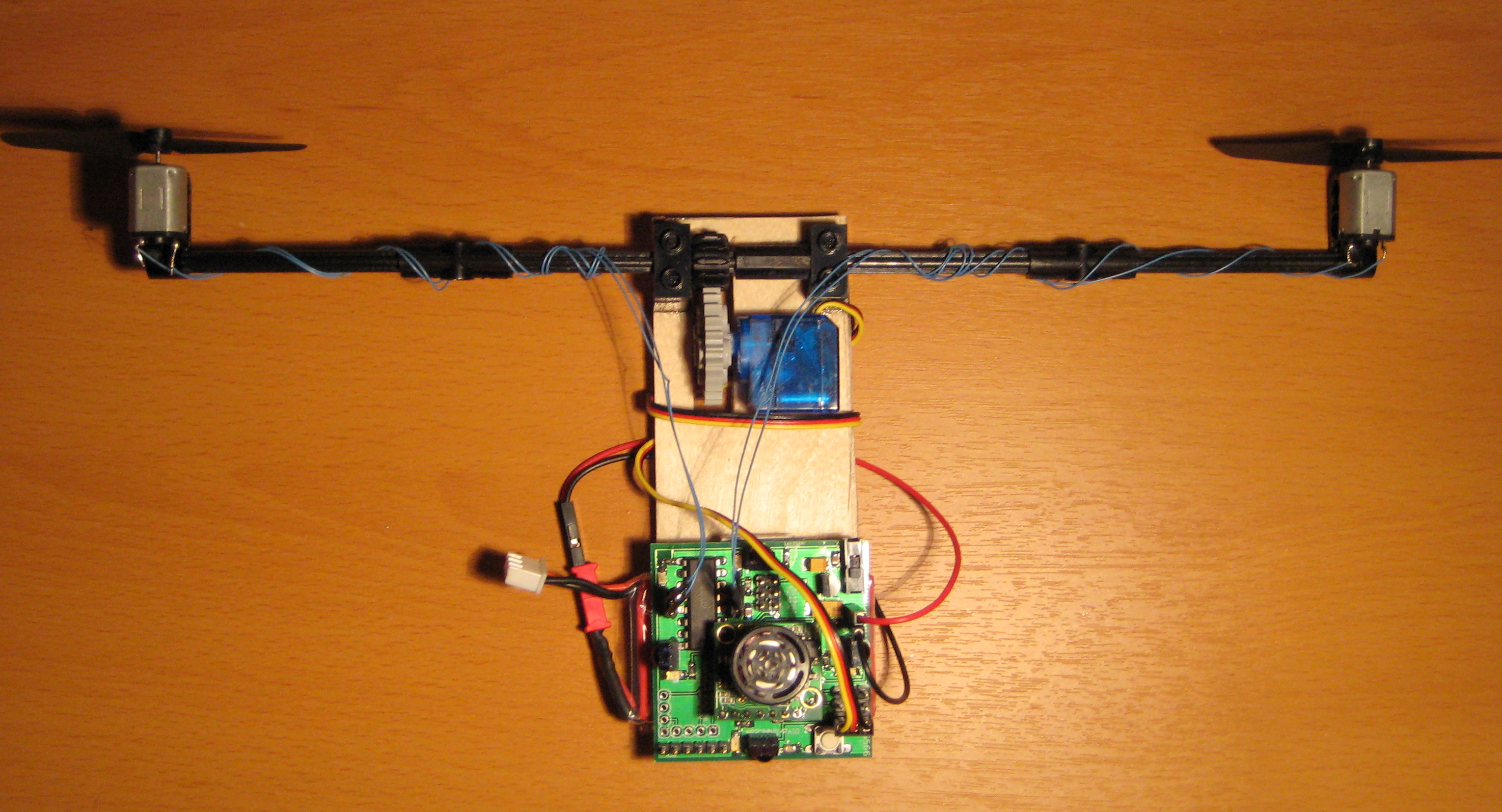 Here are the instructions to build your own BlimpDuino platform. All the parts, with links and prices, are at the bottom:

Step 1: If you're buying a pre-made BlimpDuino board (not available yet), you're done! If you're doing it yourself, order the parts and assemble a BlimpDuino board. You'll need to also download the Eagle files from that post to see which components go where. Don't forget to check the polarity of the two big capacitors and the LEDs when soldering. Use the female machine pin connectors for the two motor outputs, and the male machine pin connectors for the 7-pin ultrasonic sensor connector. Once you've got the board assembled, set the fuses and load the firmware as per these instructions. Then you can load the BlimpDuino code with the Arduino IDE (remember to select "Arduino Pro" as the board. The latest code can always be found on the BlimpDuino home page.

Step 2: Cut out the gondola platform from the 1/16th plywood. Here are the dimensions:

Step 3: Assemble the Lego vectoring motor shaft with the parts listed below. The following view, with the assembled shaft on top and the exploded view below, should show you what goes where:

Step 4: CA glue on to the plywood the two Lego blocks that hold the motor shaft so the little gear spins freely at the front end of the slot in the wood. Snip the studs off the two little Lego blocks without the center hole. CA glue them to the other side of plywood according to the following photo. Make sure the two Lego blocks are a little bit more than the width of the LiPo apart, as shown: 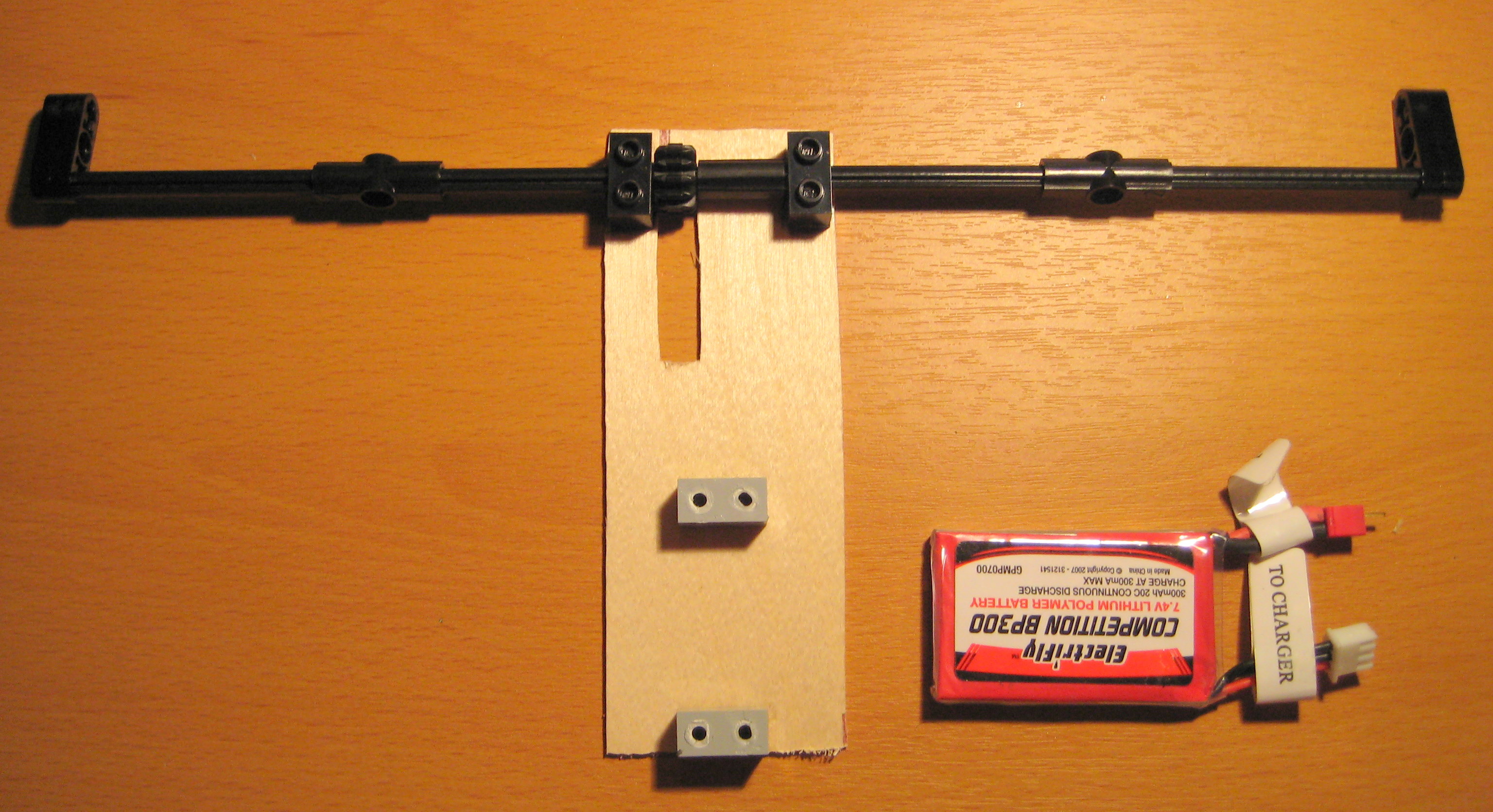 Step 5: Enlarge the hole in the big Lego gear with a 5/32 drill. CA glue it to the shaft of the servo (try not to get glue in the servo!). Snip the mounting flanges off the servo. Plug the servo into a RC receiver and turn it and the transmitter channel one to center the servo. With the RC system still on, place the servo in the position shown below and ensure that the gears are meshed so the motor mounts at each end are more-or-less horizontal and pointing away from the board (depending on the servo, it may be impossible to get them perfectly horizontal. Don't worry; the software will correct for this). You can also check that a RC receiver and the battery can fit where shown: 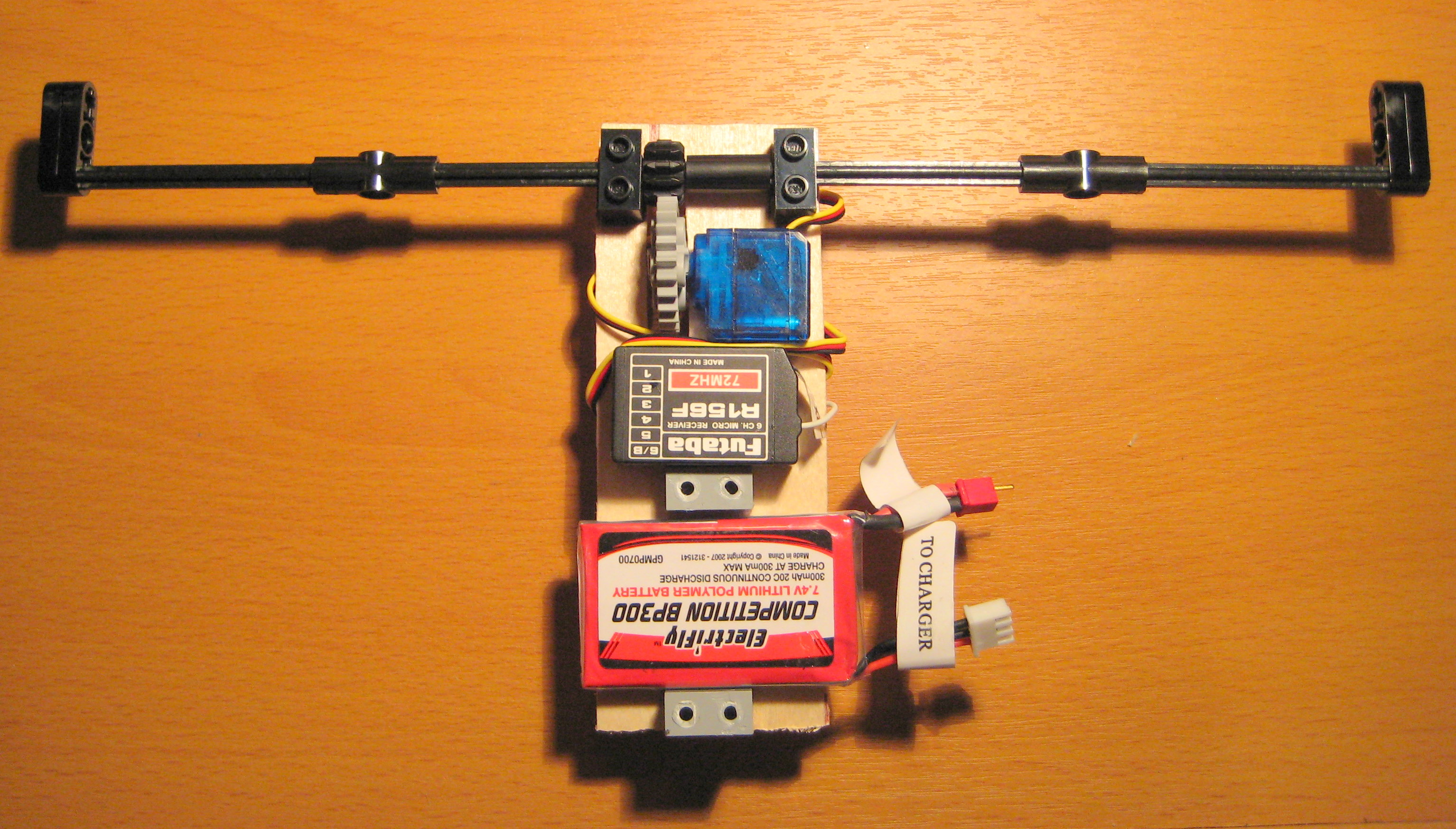 Step 6: Cut four 20cm lengths of very thin wire and strip and solder the ends to the motor terminals on one side, and male machine pins on the other (it doesn't matter which terminals go to which pins, since we'll just reverse them at the plug if the motors are going in the wrong direction). Make sure you put short lengths of heat-shrink tubing on the wires before you solder them on the connector. Once you're done, shrink the tubing over the connector solder joints. CA glue the motors on to the Lego motor mounts. Press the props onto each motor.

Step 7: Double-stick tape the BlimpDuino board to the two Lego blocks, with the switch closest to the motor shaft. Wrap the motor wires around the shaft until you've taken up most of the slack, and then plug them into the two connectors on either side of the motor driver chip. Plug the servo into the connector closest to the reset switch, black wire furthest out. Here's a diagram showing the connections: 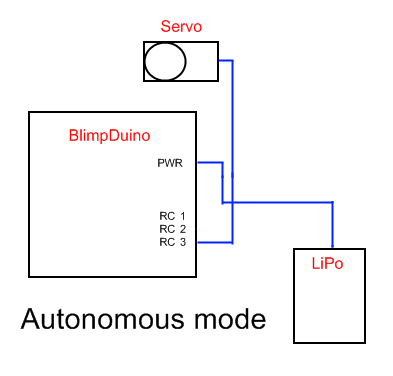 Step 8: Depending on what batteries you're using for BlimpDuino and the ground beacon, make connector wires that match the two-pin power connectors on both the board and the beacon. Make sure you've the polarity right! Power on beacon and BlimpDuino. After BlimpDuino goes through its start-up self-check process (green LEDs flash in a circle, then servos go max down, center and max up), you should see stuff start to happen. BlimpDuino should light up the green LED in the direction of the beacon, and the servos should move up and down depending on what the ultrasonic sensor is seeing. The motors should turn in the opposition direction as the lit LEDs. The props should be blowing air back (away from the board). If they're blowing the wrong direction, just reverse the connector into the BlimpDuino board. Step 9: If everything works, you're ready to go! Inflate the envelope and tape the BlimpDuino gondola on the bottom and trim it all so it's neutrally buoyant, or as close as possible. Put the beacon on a chair in the middle of the room and power it on. Holding the blimp at the desired height, power it on and wait until the servos go up and down (that's a sign that ultrasonic sensor has recorded the distance to the floor). Let it go. The blimp should maintain height and circle the beacon. Looks simple, but that's the beginning of full autonomy! Step 10 (optional): If you want to fly in RC mode, connect a RC receiver to the other two connectors next to where the servo goes, and plug the servo into the receiver's channel 2 (elevator) position. Our code should autosense that a receiver has been connected and place you in RC mode, where the aileron controls the differential thrust of the motors, the elevator controls the vectoring servo and the throttle controls the speed of forward motion. Here's how to connect everything in RC mode: 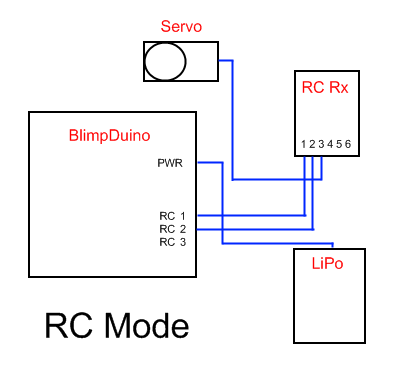 Here's everything you need (prices shown are approximate price of all the components if you buy from the retailers linked. In the case of multiple units, the price reflects the total price of all the units required):

Lego parts: (All but the last can be found by going to Lego's "Pick a Brick" store and entering in the name in search box)

(For RC mode, you'll also need a transmitter and receiver. Any one will work--you only need three channels)