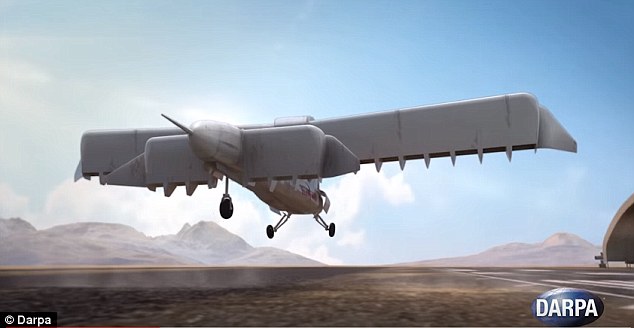 For decades, aircraft designers seeking to improve vertical takeoff and landing (VTOL) capabilities have endured a substantial set of interrelated challenges. Dozens of attempts have been made to increase top speed without sacrificing range, efficiency or the ability to do useful work, with each effort struggling or failing in one way or another.

DARPA’s VTOL Experimental Plane (VTOL X-Plane) program aims to overcome these challenges through innovative cross-pollination between fixed-wing and rotary-wing technologies and by developing and integrating novel subsystems to enable radical improvements in vertical and cruising flight capabilities. In an important step toward that goal, DARPA has awarded the Phase 2 contract for VTOL X-Plane to Aurora Flight Sciences.

“Just when we thought it had all been done before, the Aurora team found room for invention—truly new elements of engineering and technology that show enormous promise for demonstration on actual flight vehicles,” said Ashish Bagai, DARPA program manager. “This is an extremely novel approach,” Bagai said of the selected design. “It will be very challenging to demonstrate, but it has the potential to move the technology needle the farthest and provide some of the greatest spinoff opportunities for other vertical flight and aviation products.”

VTOL X-Plane seeks to develop a technology demonstrator that could

Aurora’s Phase 2 design for VTOL X-Plane envisions an unmanned aircraft with two large rear wings and two smaller front canards—short winglets mounted near the nose of the aircraft. A turboshaft engine—one used in V-22 Osprey tiltrotor aircraft—mounted in the fuselage would provide 3 megawatts (4,000 horsepower) of electrical power, the equivalent of an average commercial wind turbine. The engine would drive 24 ducted fans, nine integrated into each wing and three inside each canard. Both the wings and the canards would rotate to direct fan thrust as needed: rearward for forward flight, downward for hovering and at angles during transition between the two.

The design envisions an aircraft that could fly fast and far, hover when needed and accomplish diverse missions without the need for prepared landing areas. While the technology demonstrator would be unmanned, the technologies that VTOL X-Plane intends to develop could apply equally well to manned aircraft. The program has the goal of performing flight tests in the 2018 timeframe.

Aurora’s unique design is only possible through advances in technology over the past 60 years, in fields such as air vehicle and aeromechanics design and testing, adaptive and reconfigurable control systems, and highly integrated designs. It would also be impossible with the classical mechanical drive systems used in today’s vertical lift aircraft, Bagai said.

The Phase 2 design addresses in innovative ways many longstanding technical obstacles, the biggest of which is that the design characteristics that enable good hovering capabilities are completely different from those that enable fast forward flight. Among the revolutionary design advances to be incorporated in the technology demonstrator:

Electric power generation and distribution systems to enable multiple fans and transmission-agnostic air vehicle designs
Modularized, cellular aerodynamic wing design with integrated propulsion to enable the wings to perform efficiently in forward flight, hover and when transitioning between them

Overactuated flight control systems that could change the thrust of each fan to increase maneuverability and efficiency
“This VTOL X-plane won’t be in volume production in the next few years but is important for the future capabilities it could enable,” Bagai said. “Imagine electric aircraft that are more quiet, fuel-efficient and adaptable and are capable of runway-independent operations. We want to open up whole new design and mission spaces freed from prior constraints, and enable new VTOL aircraft