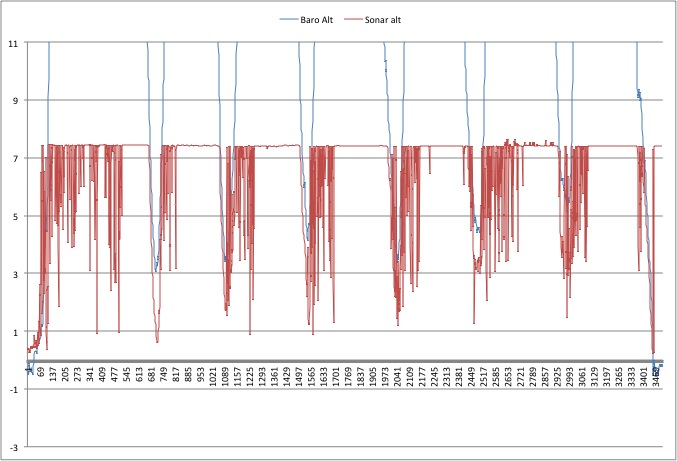 This has been on my to-do list for ages as I have never gotten around to getting some real world data to see if this would work.  Finally got the real world data yesterday with the Maxbotix XL-EZ1 mounted in a SkyFun.

The graph shows data logged on a flight with 6 low passes using APM2 and the MaxBotix .  The standard ArduPlane/ArduCopter sonar library was used, including the 6 element mode filter (as recommended by MaxBotix.  The terrain over which the flight was flown was middle of the road in terms of difficulty for the sensor (in my estimation) being open arid prairie, with scattered clumps of low prairie grass   Based on the actual low passes the "good" altitude estimates (bottoms of the troughs) by the sonar were probably better than the equivalent altitude estimates by the baro sensor.  Unfortunately, as can be seen, when moving over the ground with significant speed the sonar fails to maintain a clean estimate of the altitude, even with the mode filter.

Of particular concern would be occasions such as during the second, fourth, and sixth pass, where the sonar suddenly reports a much higher altitude than actual.  If using sonar for flare control, this would likely result in a pitch down, with bad results.

Certainly under good conditions the sonar could be used for flare control, but it does not appear to give a robust enough estimate of altitude to be useful for general use.