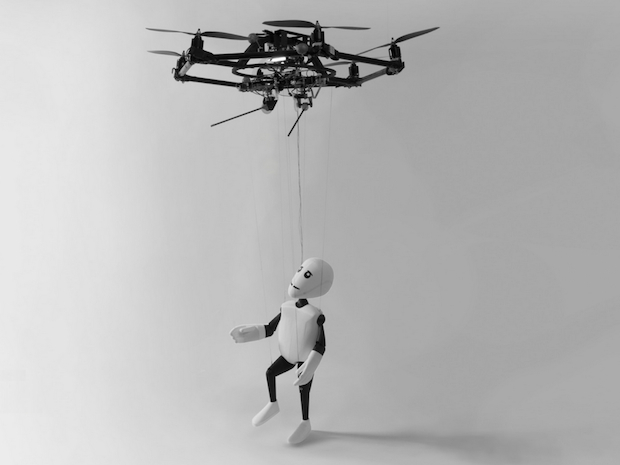 Disney has a research lab in Zurich, right next door to ETH Zurich. In the past, we've seen a lot of collaborations between Disney and ETH, often in the form of fun robot concepts and prototypes. So, we weren't at all surprised to hear that Disney filed a patent for an "Aerial Display System With Marionettes Articulated and Supported by Airborne Devices," because we spotted a prototype at ETH Zurich last year, and its name is Maurice. PuppetCopter Maurice was a Focus Project at ETH Zurich last year. Focus Projects "allow engineering students at ETH Zurich to apply their theoretical knowledge in practice. During two semesters they independently develop a product. Based on an innovative project idea, the teams pass through this reality all processes of product development." And it sounds like this particular project was actually commissioned by Disney:

Walt Disney is always looking for new attraction for amusement parks. The task, they asked a team of budding engineers and industrial designers was to create a flying doll that attracts viewers. The doll is Maurice and may Waving, Walking, Flying and light up in different colors. This is made possible by a Hexacopter with a balanced platform on which are the action arms for controlling the doll. The doll itself is made entirely in the rapid prototyping process. There's a video of Maurice in action on its Facebook page, here.

Disney's patent isn't for Maurice specifically; it's for a much more generalized (and much, much larger) PuppetCopter system that can handle absolutely monstrous puppets: See all those strings? Imagine an autonomous quadcopter attached to each one, making Jack dance. Dance, Jack. DANCE!

The aerial display systems described provide a number of useful advantages over prior display techniques and devices. For example, large characters can be flown safely to make a dramatic display. The characters Or marionettes can be articulated much more freely and effectively than, for example, a dirigible. The marionette's body may be formed of very light materials yet can be made to appear to be relatively hard or firm (e.g., hard-appearing edges and features) while remaining soft and flexible, which improves safety for an audience of spectators below the flying marionette. The use of a lightweight marionette allows a team or number of relatively small UAVs to provide the relatively small suspension force required to keep the marionette afloat with or without articulation. The marionettes described are not tethered to the ground or are not ground based but, instead, are supported by flying vehicles that provides a unique and dynamic aerial show.

Disney set down two other UAV-related patents, including one for UAVs that hold up moving projection screens, and other for UAVs that form aerial displays out of floating pixels. That last one is basically the Disney ResearchPixelbots gone airborne, but we have to point out that people have been thinking about this for a long time (MIT's Flyfire is from 2010) and actually doing it for slightly less of a long time.

I think Disney's clever idea to call them "flixels" is cool, though, and if they can pull together enough flixels to form an actual flying display, that would be seriously impressive, since even a basic flying display with a QQVGA resolution (160x120) would need 19,200 (!) individual flying robots. Which would be awesome. But good luck.