This is a screenshot from Ecosynth's brand new 500 by 500 meter photo acquisition method, taken at Patapsco State Park! This is Wolfgang: our newest octocopter. It flew the 500 by 500 meter mission. Wolfgang is our biggest and heaviest copter, it can carry four lipo batteries plus its payload. It can stay aloft for 30 minutes of safe flying time. The camera is the new Ecosynth standard, the Canon Powershot ELPH 520. The camera is mounted in a card case for protection and ease of attachment to the copter; it points straight down to collect photos for aerial mapping.

Wolfgang uses the frame, legs, motors, and propellers of a Mikrokopter Miko XL.  However the brain is an APM 2.5, and the ESC's are jDrones 30 amp (those Mikrokopter ESC boards are too finicky and fragile.)  The electronics are covered by a tupperware container (not the most glamorous, but it is sturdy and gets the job done.)  It carries four Venom 5000mAh 4-cell lipos.  Control is the Spektrum seven channel.  One Garmin Astro dog tracker is attached for locating the copter in an emergency situation. 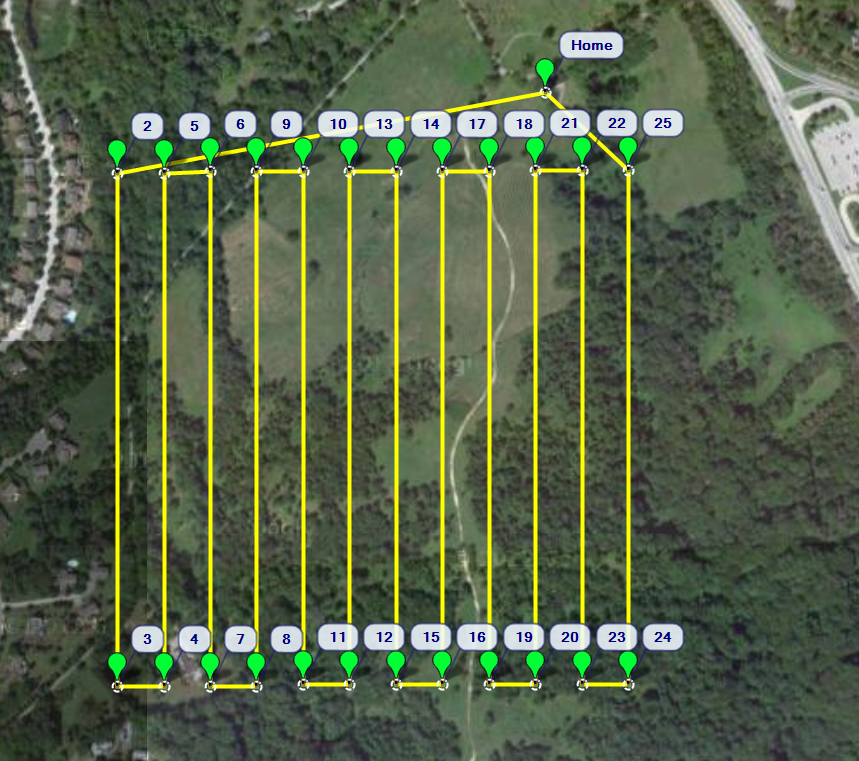 Wolfgang's planned route in Mission Planner (created by Michael Oborne). The flight path is actually 550 by 550 meters, so that the 500 by 500 meter collection area is surrounded by 25 meters of buffer area on all sides. The tracks are 50 meters apart. The copter flies at 120 meters above the ground, so that pictures taken along adjacent tracks will overlap by 50 percent at the edges. This overlap is important to provide a seamless point cloud product.  550 by 550 is an unprecedented collection size for Ecosynth.  Layed end to end, the flight is 7.8 km long, more than twice as long as out previous flight standard: 275 by 275 meters. 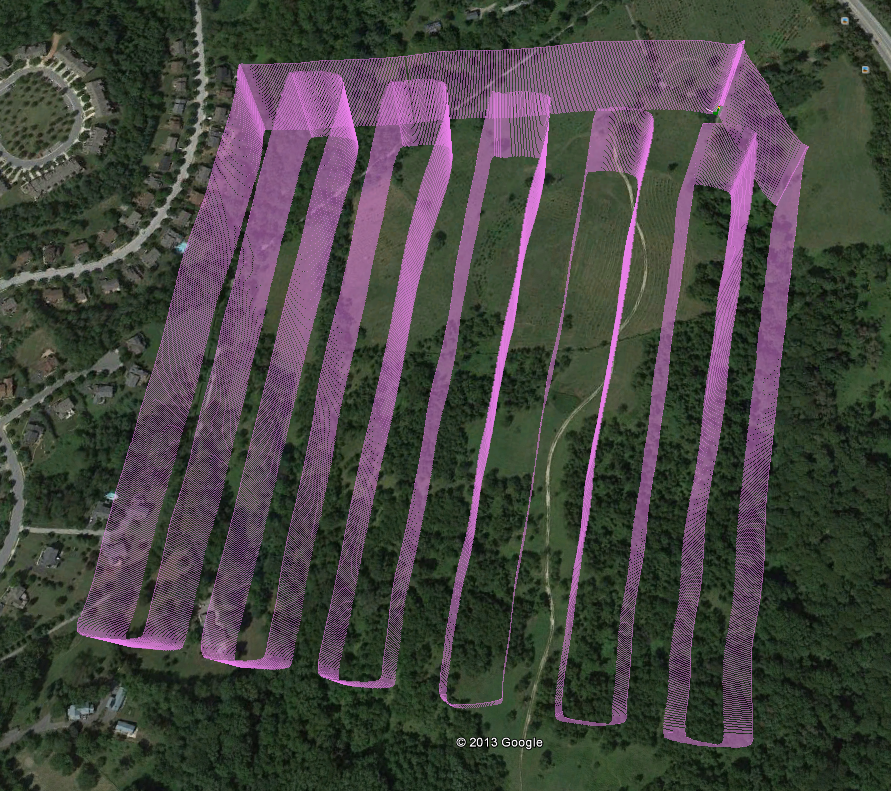 This screenshot from Google Earth displays the actual path followed by Wolfgang while it was gathering pictures. It managed to follow its router with great precision. I estimate it deviated no more than two meters from its planned track at any given time. In addition, according to the telemetry it very rarely dipped below 119.5 meters or 120.5 meters, so the altitude was very consistent. The groundspeed reported that it flew between 7 and 9 m/s along the tracks, which is well within desirable parameters. The photo collection took 20 minutes to fly over all 12 tracks, and the entire flight took 25 minutes including takeoff and landing. 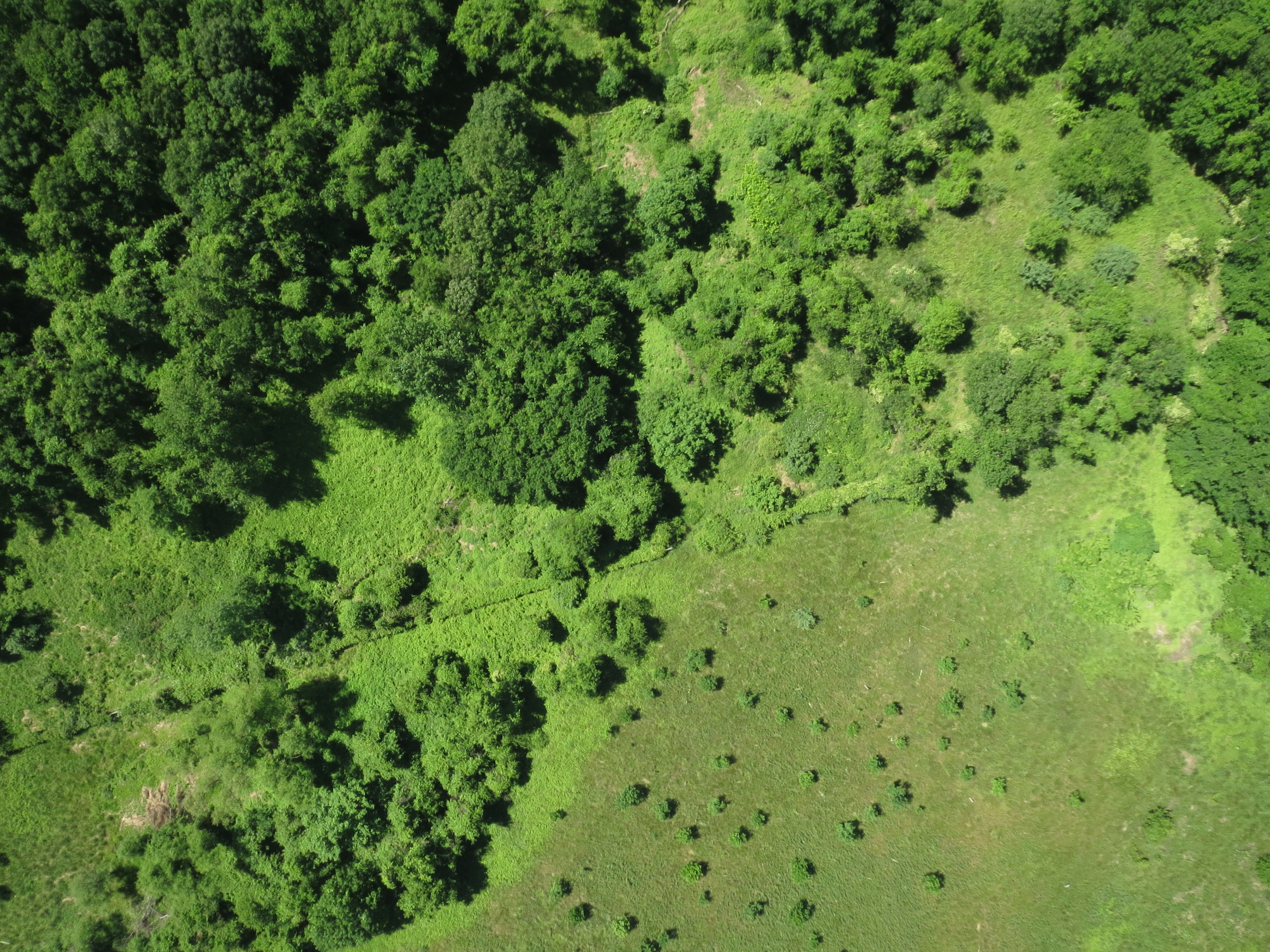 An example photo from the set. Wolfgang recorded 2250 pictures in the collection area, all of which were sharp and detailed like this one. The sun was bright and unclouded, so the lighting was consistent throughout the entire flight. These favorable conditions and outstanding copter performance resulted in a very consistent and detailed point cloud. The pictures were run through Photoscan to produce this point cloud:

(View in HD and use fullscreen to gain the full effect. At least, the fullest effect that can be gained without manipulating the cloud yourself.)