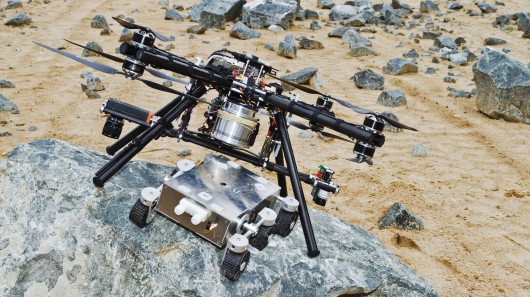 Remember a year ago when Randy used an ArduCopter to autonomously drop a rover on a freakin' volcano? Good times.

Well, now the European Space Agency has done the same thing, but this time time they have ridiculous music, a massive budget and a bunch of German university researchers. They also say it's for a Mars rover, which will be quite a trick for the quadcopter, since the Martian atmosphere barely exists (it's 0.6% the density of Earth's atmosphere, which means copters wouldn't work). Let's assume they know this, and if they actually do drop a rover on Mars, the dropship will have rockets, not props.

You can read the whole over-the-top press release below. But really, the music in that video has to be heard for full comic effect:

Watch the video HERE (it won't embed for some reason)

The dramatic conclusion to ESA’s latest StarTiger project: a ‘dropship’ quadcopter steers itself to lower a rover gently onto a safe patch of the rocky martian surface.

StarTiger’s Dropter project was tasked with developing and demonstrating a European precision-landing capability for Mars and other targets.

The Skycrane that lowered NASA’s Curiosity rover onto Mars showed the potential of this approach, precisely delivering rovers to their science targets while avoiding rock fields, slopes and other hazards.

“StarTiger is a fresh approach to space engineering,” explains Peter de Maagt, overseeing the project. “Take a highly qualified, well-motivated team, gather them at a single well-equipped site, then give them a fixed time to solve a challenging technical problem.”

This latest team was hosted at Airbus Defence & Space’s facility in Bremen, Germany, joined by engineers from the German Research Center for Artificial Intelligence, Portgual’s Spin.Works aeronautics company, and Poland’s Poznań University of Technology Institute of Control and Information Engineering.

Starting from scratch for the eight-month project, the Dropter team was challenged to produce vision-based navigation and hazard detection and avoidance for the dropship.

It has to identify a safe landing site and height before winching down its passenger rover on a set of cables.

Flying to a maximum height of 17 m, the dropship comes gently down to 10 m above the ground, where it begins lowering the rover on a 5 m-long bridle, coming lower until the rover touches down. Then it returns to a safe altitude.

Flight testing took place at Airbus’s Trauen site in northern Germany, which back in the 1940s was the scene of spaceplane pioneer Eugen Sänger’s rocket experiments.

A 40 m by 40 m Mars-scape was created, littered with hazardous rocks, where the dropship had to pick a safe spot to deliver its passenger.

The dropship was customised for the project from commercial quadcopter components, with a smaller drone used for preparatory indoor testing.

Using GPS and inertial systems to fly into position, it then switched to vision-based navigation supplemented by a laser range-finder and barometer to land its rover autonomously.

This demonstration having proved the concept, the dropship approach is now available for follow-on development by planetary missions to come.

It brings team members together on a single site to work on a set challenge, aiming to produce a working prototype by the end of the project’s time limit.