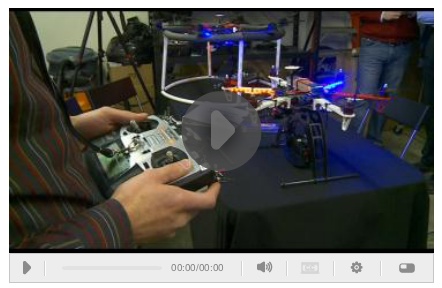 BROOKLYN PARK, Minn. (WCCO) – Charles Eide and Mike Danielson have been flying radio controlled aircraft since they little kids growing up in the same neighborhood.

As adults they formed a business, sharing a love of video production and photography.

Soon, they discovered their hobby could merge with their business, which took a huge leap when they began taking on aerial photographic work.

By mounting stabilized cameras onto the bellies of the drone aircraft, Eide and Danielson can offer customers a bird’s-eye view of anything from construction sites, to city attractions, to real estate listings.

“It helps sell houses, which is really in my opinion a huge economic impact in the Twin Cities — helps houses move faster,” Eide said.

Business was booming, until a call came from the Minneapolis office of the Federal Aviation Administration. They were simply told to ground their commercial use of the aircraft. Turns out, current regulations don’t allow unmanned aircraft for commercial purposes.

In fact, their use is strictly prohibited from operating in what the FAA defines as “Class B” airspace. That’s found in densely populated areas around key airport traffic routes, most often the airspace surrounding the busiest airports with a high volume of commercial air traffic.

Eide says he understands the need for safety regulations, but argues that his company has its own flight safety protocols. They rarely fly more than 200 feet above the ground and will never operate near airports.

“What we’re doing is low-range stuff to show off the real estate market and features in a house or property,” Danielson said.

The FAA says the urban airspace demands strict safety restrictions. Eide understands, but argues with tens of thousands of dollars invested in radio controlled aircraft, flying safely is job No. 1.

“I agree that there should be regulation on this stuff because there are more and more hands touching this stuff,” Eide said. “However, we need to work together here.”

The duo wants to work with the FAA over this. The current rules are clear, but the FAA is going to look at these rules on Friday.