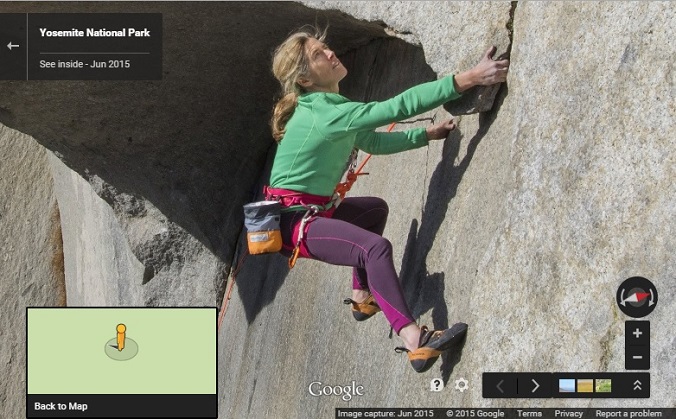 An unannounced addition to Google Street View suggests that drone imagery could fit in nicely. From the Google Earth Blog:

Google are constantly looking for new places to capture Street View, often going a long way away from the nearest street. The Street View cameras have been on boats all over the world such as the Amazon River and Greenland, under the oceans and on zip-lines into the Amazon forest canopy.

Now the street view cameras have been carried up sheer rock walls to give us views of one of the most famous rock climbs in the world – the El Capitan in Yosemite National Park, California, USA. Read more about it on Google’s LatLong blog. It is not technically the first vertical Street View, as the Burj Khalifa, in Dubai gave us Street View going up to the 154 floor, but I am sure they took the lift.

The Yosemite area has the new 3D and looks excellent in Google Earth, but we were unable to view the Street View from within Google Earth. We had similar problems with underwater street view and the forest canopy Street View.

If you watch the intro to the above YouTube video, there is a nice ‘fly in’ to the location reminiscent of a Google Earth tour, but done using Google Maps. However, as far as I know, it is not something Google has made available to the public.

Click here to find the above location in Street View.