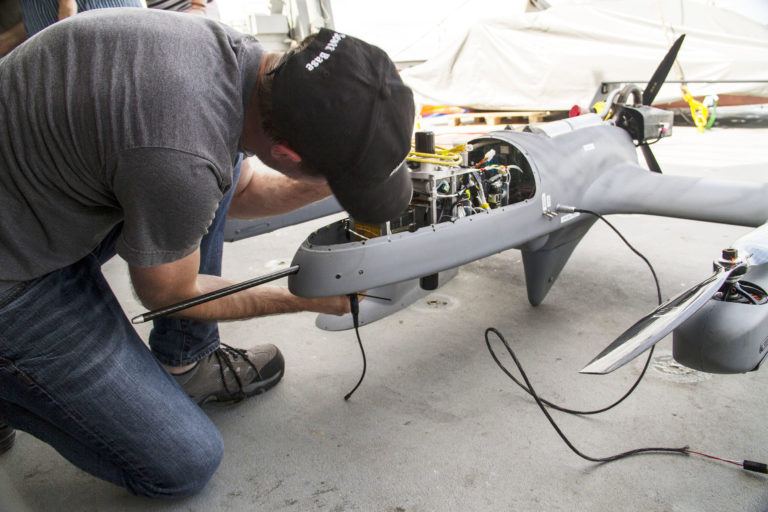 Love these updates from the crack Schmidt team

“It took half an hour to drill those three holes” sighs Scott Brown, Physicist and Electronic Engineer, looking at the tiny penetrations on top of the UAV. Fiber optic cables now poke out, ready to measure sunlight and send the information to the payload (scientific package) inside the aircraft to be recorded.

It has been almost three years since the process to design the instruments began. It was one process making sensors, software, cameras and GPS work, and another entirely to make them fit into the limited space provided by the aircraft. Brown’s team had to customize every component, and today the effort is paying off. “The instruments behaved how they were supposed to,” says Chris Zappa, Oceanographer and head of Brown’s engineering team. “We have gathered some very interesting data in high resolution, and now we can shift the focus back to science.”

Getting the instruments to fit, working inside the aircraft was not the only aspect that required great amounts of time and patience. Organizing an interdisciplinary research cruise such as this one was no easy feat, but its purpose is nearly complete and tomorrow will bring the final station.

Scott Brown, Physicist and Engineer, incorporates a hemispheric radiometer inside an Unmanned Aerial Vehicle. It took almost three years for these instruments to be customized so they could fit and function properly inside the aircrafts.SOI/ Mónika Naranjo González

Each team will now bring the data and samples collected back to their home labs, then begin the long job of processing them. They will then crosscheck their findings with those of the other working groups, when the true value of this collaborative effort will become clear.

Ground truth measurements for ocean color satellites is one interesting application. While the UAV flies over the ocean, away from the effects of ships or clouds, cameras will be recording the different colors of the water in high wavelength resolution. Regular cameras record images in three wavelengths: red, green and blue. Zappa’s instruments are capable of continuously recording 322 different wavelengths. 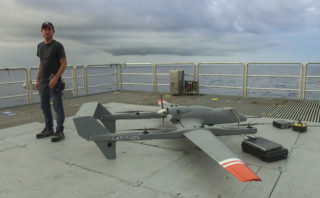 Scott Brown, Physicist and Engineer, stands next to one of the HQ-60B drones to scan the sea surface. The drone had just completed another successful mission and was being disarmed on Falkor’s flight deck.SOI/ Mónika Naranjo González

By correlating the colors picked up by the cameras with the chemical and biological composition of the samples processed by other working groups, this team will be able to link oceanic processes with color spectrum of seawater. This information will be used to calibrate satellite observations of ocean color and link them to the biochemical processes determined by the other scientific working groups onboard.

Today, Brown’s instruments have improved enormously since the first time he tested them. They can take part in longer flights, be deployed more often, the data downloaded faster, and the instruments inside the UAV can be swapped out quickly. They also require less power from the aircraft, and are thoroughly balanced and weighted so they don’t affect the flight characteristics in any way. He is confident the payload will gather trustworthy data. His mission has been a success, as has been the mission of every scientist onboard.

Now the next stage of the process begins: understanding the stories that every sample can tell, in order to integrate them in the computer models and other forms of analysis that will lead to a better understanding of biochemical processes of the oceans. 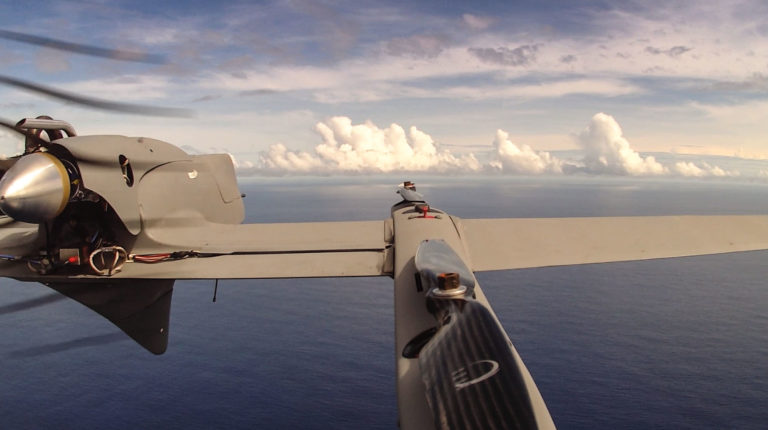 An HQ-60B drone flies over the Pacific Ocean, away from the effects that Falkor or clouds could have over data being collected. The aircraft flies an average of two hours in each mission carrying a payload of radiation, hyperspectral or infrared cameras.SOI/ Josef Wischler