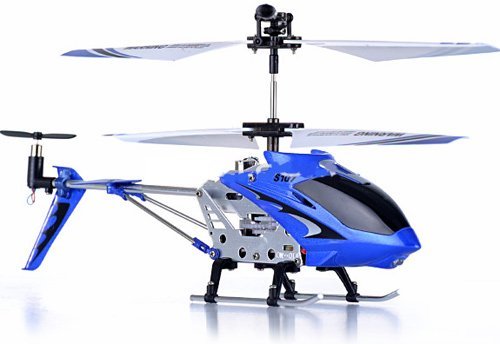 is the #1 toy at Amazon this year.

Here's an excellent HBR article about the company behind this toy. I can imagine that in a few years, they could be making autonomous helis, essentially MAVs. These guys have serious hardware skills.

"In the midst of the [2005] downturn Huang, Syma's vice general manager of product development (and the owner's brother-in-law) took a business trip to Japan and brought home a new model airplane. Intrigued by its
components, he took it apart, wondering if a helicopter made up of
separate, replaceable parts could be economically produced. Three months
later, he and his people had worked it out, and the new model that
resulted became an instant hit. "He saved Syma," Kevin Cheng, Syma's
sales manager told me. "And he saved the whole toy helicopter industry
in Chenhai."

If that's not quite innovation, it's still more than imitation. It's the kind of achievement celebrated by Oded Shenkar in Copycats, involving borrowing and combining inputs from multiple others and integrating them into a distinct, cost-beneficial, and continuously
improved package.

Syma isn't an aggressive new product developer; it prefers to succeed through determined focus. Its team might produce six to eight concepts over the course of 12 months, but the company gets behind just one as its "Product of Year".
Much of its effort goes into continuous improvement of a few existing
series. Take its Apache Attack series, for example. First developed in
2007, it featured three channels of radio control, and a simple body
design. The year 2008 brought details to its appearance, such as wheels
and mini-cannon, and in 2009, a more refined fuselage. This year, a gyro
was added to the main rotor to increase stability in flight.

As testament to its success, Syma, born of imitation, now has many imitators. There are over 40 other companies in Chenghai offering toy helicopters with essentially the same functions, same structure, and
same appearance — some of them even in the same packaging, save for the
logo. "They are waiting at our gate," Cheng told me. "As soon as we
launch a new product, they take it and copy." But he insisted that Syma
is not afraid of the competition. "Our quality control process is strict
and costly," he explained, "and they are not willing to pay for this."