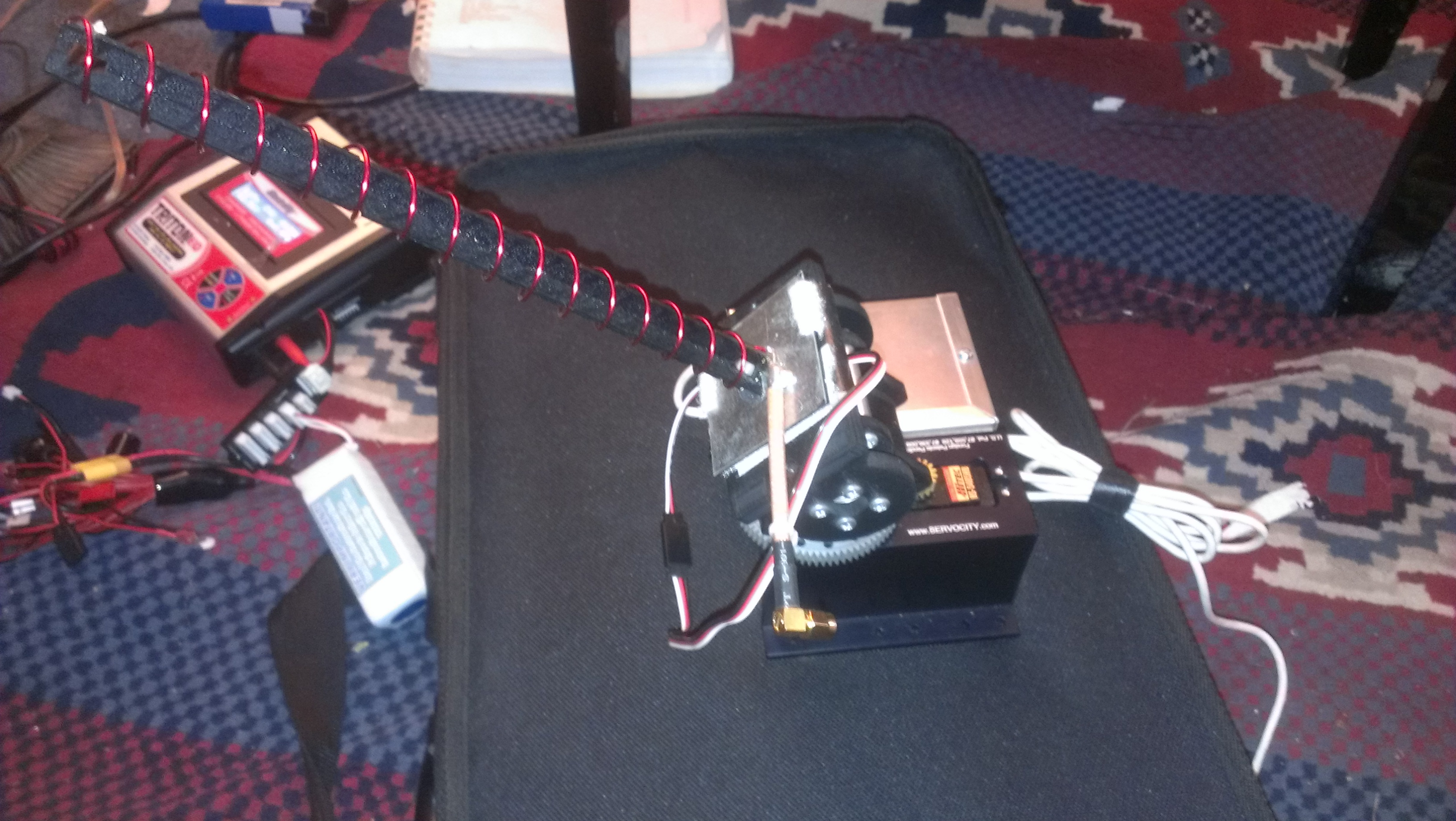 For anybody interested in improving the range of your FPV and the quality of the signal (and still stay FCC legal), and antenna tracking could be for you. After looking around for a 'stock' solution I decided to build one myself. Above is a photo of the final product.

I am using the 5.8Ghz band for my FPV configuration, and this keeps the antenna small and the entire package very compact and portable. There are two stock full-size servos and a servo base that I purchased from ServoCity.com.

I will not say that this solution is 'cheap', but it is very effective. I have yet to fly my plane out of range where I lose the  video so I cannot say what the exact range is, but I have not gone beyond 2 miles using a 500mw transmitter. The receiver antenna is a spiral RHCP (Right-hand-circularly polarized) antenna which has 16 turns! With this configuration the gain is 16dbi, which is excellent, but it's also very directional, and hence the need for the tracker.

The total cost of this rig was about $280 (plus the work to assemble it).   Half the cost is the servo and the servo mounts and gears. The other half is the antenna and the Arduino.

The link to the antenna is here (ReadyMadyRC). There are a number of other antennas that will work with this tracker as long as the footprint is not too big, but for 5.8ghz this is usually not an issue. To attach this antenna to the servo, I simply used a strip of Velcro so it can be easily removed. It is light enough that the Velcro holds it perfectly.

Here is the parts list for the servos: (ServoCity.com)

You can choose different servos if you prefer to spend the money (or go on the cheap), if you can find them elsewhere, they are just standard size servos.

You can also buy the kit with the servo included and pre-assembled, (additional $30 cost). Here is a link to the servo kit

If you are not good with a soldering iron, pay the extra. You will need to disassemble one of your servos, disconnect the potentiometer  wires, and re-solder them to the external one supplied in the gear box. The external feedback will allow your tracker to move 360 degrees in the azmuth.

Also, I chose the 5:1 gear ratio, and this seems to work very well, even at full speed, there is no jerking and the tracker tracks the plane perfectly. A lower ration could make it jerky, but it may also work.

Assembling the servo box is not too difficult but will take you about an hour (plus wiring if you buy the bare kit). I would suggest paying extra for the pre-assemble servo base as I found modifying the servo to be an 'advanced' activity, however I was able to pull it off without losing parts or damaging the servo.  All the instructions come with the kit, so I will not go into detail here on how to assemble the pan/tilt box.

The assembled serve pan/tilt will should look like this: Part 2: The Arduino and Misson Planner communications to control the servos

Now comes the fun part. Controlling the servos. I am using a standard Arduino Uno board which you can purchase just about anywhere. Here is a sample link, Arduino Uno that cost $25.

I also added the 'Servo Shield' to my Arduino, however I think it's possible to just wire the pins directly to the Uno without the shield, but the shield has the standard servo pins.  Here is the link to the servo shield.

To connect the servos to the Arduino, just use the standard connectors that come with the servo. No wiring necessary if you use the Servo Shield. You can pick any servo port on the Arduino, just take care to make sure the software is using the pins that you have selected to control the servos.

The ground wire on the servo (usually black or brown) should go toward the "G"  and the signal side (usually yellow) goes to the "S" label on the Servo Shield. If you do not use the shield, you will have to solder the wires or install your own plug on the Arduino.

For the servo power, I have chosen to use the power supplied by the Arduino through the USB port and for two standard size servos, this seems to work fine with a lightweight antenna. If the load becomes too big, you could trigger the on-board fuse, so in that case you may consider using an external power supply for the servos. So far, I have not had an issue with just using the power from the Arduino and the computer's USB port which will supply 500mA.

Here is an image of the shield (use the digital servo ports shown labeled GVS): 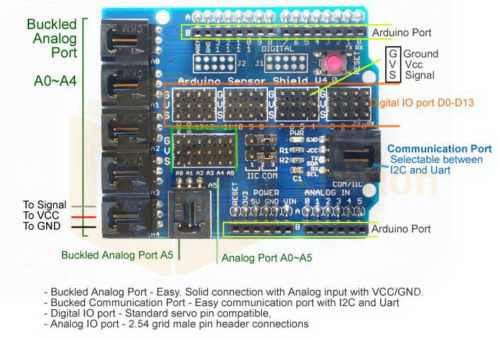 Connected to the Arduino (and enclosed in a metal case), the assembled unit looks like this: 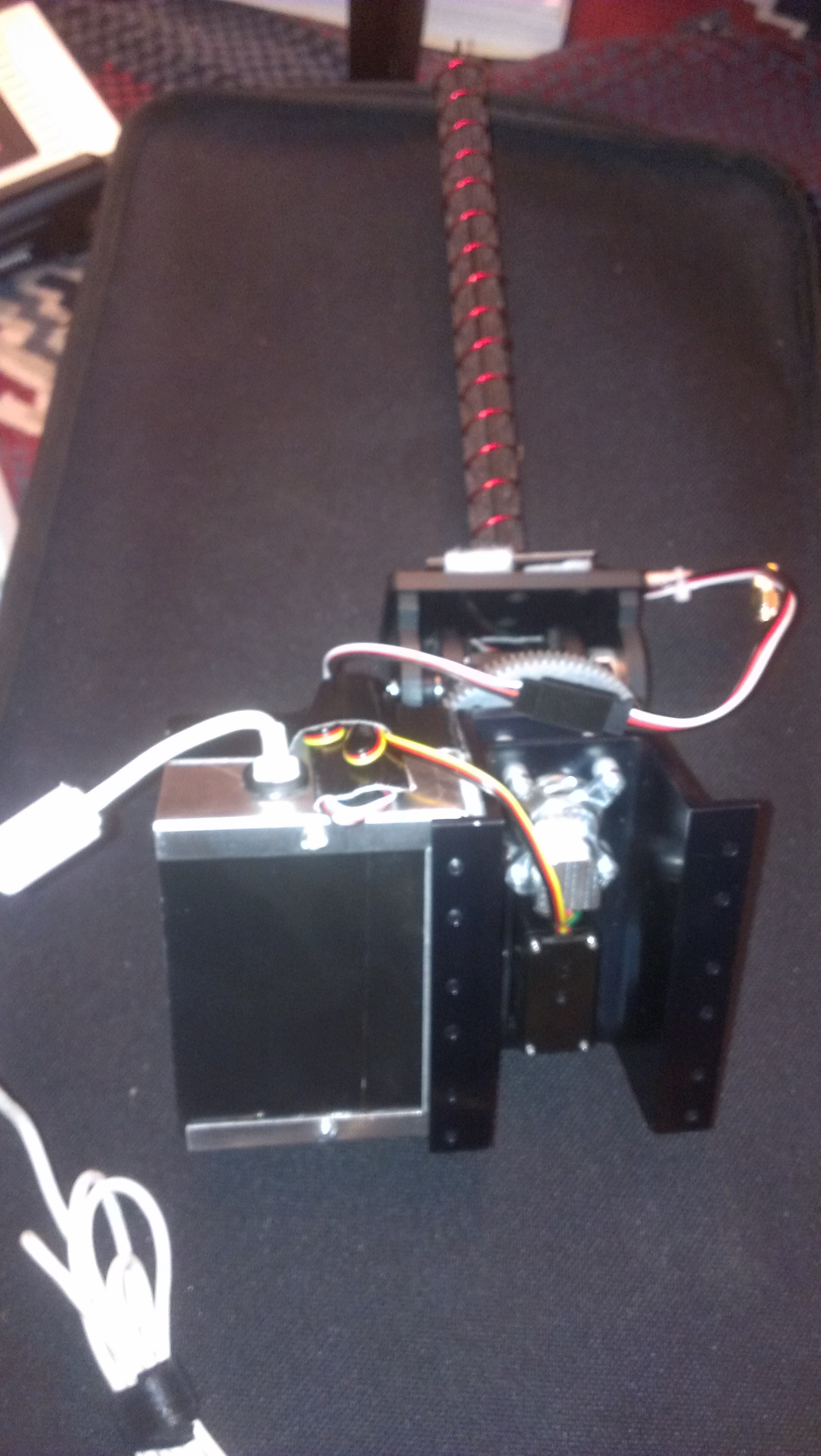 So after all this 'hardware' assembly, you will want to test it out to see if it works with mission planner. BUT you will need some software to run on the Arduino.  Here is the source code that I used:

Everything is done over the Arduino serial port when Mission Planner connects to the Arduino. I picked to hard-code a serial port baud rate of 57600.

There are two lines of code that determine which pins on your board will control the servos:

On my board, I used pins 9 and 10 which end up being the first two servo ports on the Servo shield.

There is one line of code that controls the pan calibration that I figured out using trial and error and some calculations to make the pan go 360 using the 5:1 gear ratio:

The inputs (interpVal) are PPM values sent by Mission Planner. The hard part is done in Mission Planner as it computes the PPM servo values from the GPS coordinates. To make it work with this setup, you will need to 'tweek' the values for your servos and the gear ratio of the pan gear box. If you duplicate the setup I have described, you should be able to load the firmware into the Arduino and simply connect the Mission Planner and it should work (in theory!).

Load the Mission Planner and go to the "Initial Setup" tab, and select "Antenna Tracker" as shown below:

Using the default values shown here, (and your serial port), you should be able to connect and control the servos using the 'Trim' sliders. If everything is working ok, you should see the servos move to their extreme positions (pan = 360 deg), and (tilt = 90). The tilt will go from horizontal to the ground, to vertical straight up.

If all is well, then you can try it in the field. Just plug it in, and connect, and Mission Planner does the rest.