What does the title mean?  I was a Crew Chief for the Shadow 200 system over in Afghanistan.  It costs around 800K for one bird and I thought I'd gauge my ability to build a better bird cheaper.  Here goes:

Today is the first real day of building.  For the last 4 months or so I have been researching parts, ordering them and patiently waiting for them.  I have all I need to get started minus the new 3DR Telemetry set.

I understand they will be an all around upgrade and I spent all last night reading the wiki on them.  I like them more than the Xbee just based on simplicity itself.  There are fewer parts, less weight and way more compact.  I've still not decided on any modifications to it.

I think for now I will do everything as default.

A YAK 54 electric plane with a 45" wingspan.  Rimefire .10 electric motor with a 35A ESC.  I had this bird from my tour in the Philippines and managed to ship it home before it was built over there.  Nice aircraft and I wonder if it will be too squirely for the APM2.

I have 3 2200mAh 11.1V liPos - don't want to really buy more batteries so any airframe I use must use these batteries.

APM2 unsoldered board with minimOSD, air speed add on and the new 3DR telemetry boards in the mail.

I bought a 5 and 6 volt capable BEC with the thought that I'd want to keep the motor battery and the APM2 board power supply separate.

I've got all of the other minor supplies as well, think I've spent around TOO MUCH money so far, but I really want this to be my career.  I want to build these things from concept to mass production, so this is an investment and not just the inner child in me going OH HELL YEAH THIS IS FREAKIN COOL!

I've got a plan and maybe it will happen in this order, but probably not:

4.  Upload and download all firmware and software for APM2 - Finished

6.  Yeah...this list went right out the window a week ago.

Today I discovered that I am a super genius when it comes to soldering.  Its like discovering your Batman.  I soldered the living crap out of those boards!  I'm going to buy some Batman underwear and use those when I maiden flight my YAK 54.  I'll post the pic of them soon***.

Today I downloaded all the software and made a dedicated 4G thumb drive to keep all of the master files on.  I fired up the APM2 and low and behold she worked.  I can not get the GPS to lock on but I'm inside my house and I'm sure that is what is causing the problem.  On another note, I found out I need 7 female to female cables to use 7 channels.  Each cable goes from say, ch1 on my receiver to the corresponding ch1 input on the APM2.  Its a one for one basis.  I really only need 4 for my YAK but I might as well get the full capacity. I was also able to wire up the BEC, I chose this one here.  Hooking it up to nothing but the APM2 and a watt meter I was not able to detect any current!  This is because the watt meter I am using does not measure anything less than .09 amps so all I saw was 0.0.  In that case the dedicated 11.1V 1300mAh battery I got for it ought last until the cows come home (actually* about 6 hours).  MOOOOO.  One last good thing about this particular BEC is that it has an on and off switch which means I don't have to remove a power pin from the APM2 itself, so less wear and tear!

I finally understand how to hook everything up. The problem is I need more cables. No hobby store around here has them!!  Soooooo since I can't find the pieces themselves I will just place an order for them.  So here I sit...waiting...

Back in action!  Fedex is my second favorite Uncle.  Got a cable making kit in from hanson hobbies and right next to that was my new black 3DR box!  Order was spot on too!  The new 3DR Telemetry circuit boards are VERY small.  I'm really impressed at them.  My tiny motor will only haul 3lbs max so needless to say, the lighter the parts the better!  So, later on I will post a pic of fully functioning APM2 so others can just look at it and understand how its supposed to be hooked up.  My APM2 required me to slightly bend 2 pins to get the daughter board to snug up against the 2x6 pin rack.  After I did that the darn thing works like a drag queen at Madi Gras! (umm...look that one up)

I am getting nervous about making a nice GCS.  I want it to have a cool factor of about 9.7.  Anyone with pics of such an animal please point them out to me.  Past that I am understanding a hole lot more about how all of this works than I did just a few days ago.  It's getting close to the time I need to actually fly my YAK so I'll be even more nervous then.

And HOT DAMN! I got the bevrc's X8 flying wing kit on the way from China!  It has to be one of the sexiest flying birds I've seen in a long time!  Its MADE for amateur UAV making and I can't wait to fly that thing!  Good day all around for UAV building.

Wife was just teeming with happiness as I commanded her to hold the laptop where I could see it as I paced our backyard.  The pride and excitement was just plain palpable!  Now if only I could just stop puffing Li-Poly packs testing this stuff out and attach a flux capacitor to the watchamacallit.....

Tomorrow I'll start on integrating it into the airframe and in the morning...I'm making WAFFLES!

Now, I know you all have been in stitches wondering what's going on with my build.  I took some downtime is all, plus I had a few more goodies coming in the mail!  Now on with the updates!

I puffed a battery last week, let it drain too much...20 dollar lesson there, will have to order new ones.

I have also come to the conclusion that this Yak might not have the battery capacity to run separate power supplies for the APM2, the motor and the video transmitter.  Not sure yet but that is the way it is looking. I'll make that decision later after I know the final weight.

I got a lot accomplished today.  I made a mounting board for the APM2 and my receiver.  Epoxied it close to the CG.  I also got the 3DR radios to both upload their software and load the default values.  I'm going to leave the defaults as they seem to be good for my application.

With the APM2 correctly working I need to figure out a way to mount the air speed sensor.  It has to be in the wing to avoid the prop wash but since this was a pre built bird I'm going to have cut away some of the very nice monocote job.  I'll do that tomorrow.  Then I need to mount the 900Mhz antenna and I think I already know a way to pull that off too.

The wiring is EXTREMELY important.  What connects to where and how the connection is oriented is sensitive enough that just ONE misplaced connection and the whole thing craps its pants.  Pictures coming soon.  I have been unable to fly this bird as an RC due to high winds even at night.  It has been raging here for more than 2 weeks.

I worked on this bird until my brain was tired.  It has been a LONG time since I've done something technically challenging and I can honestly say, victory feels GOOD.

One more note, I am beginning to look into building an antenna tracker...as with most things about building one of these it at first, seemed daunting, then expensive, then I get some balls and just go for it...that will be coming soon too...the antenna tracker, not my balls.  Just sayin.

Today I built the GCS box.  Cost was about $100.  Quick and easy assembly too!  I need some foam, but only after I figure out what I'm going to put into it and the arrangement within.  Here are some self explanatory pics: 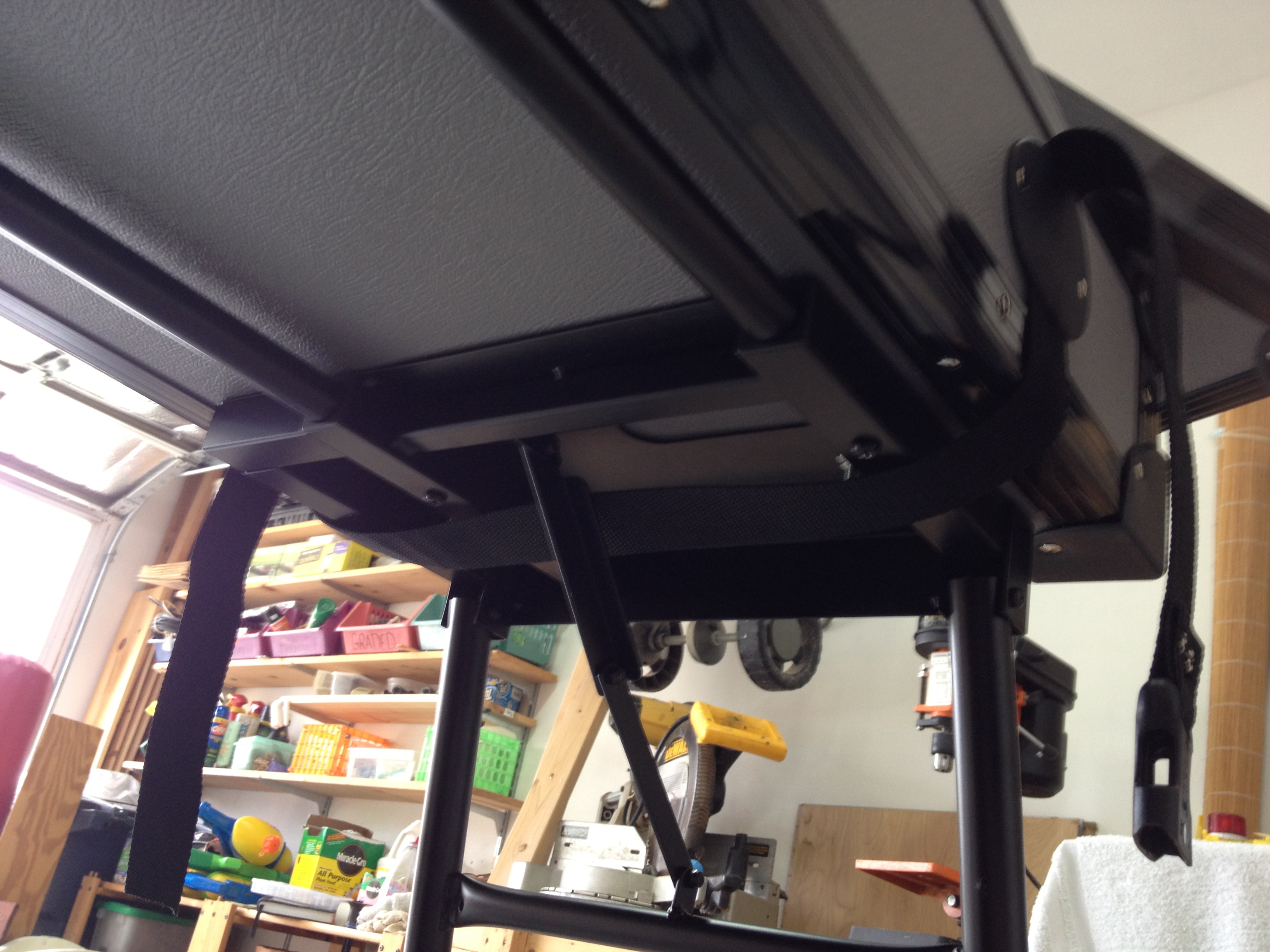 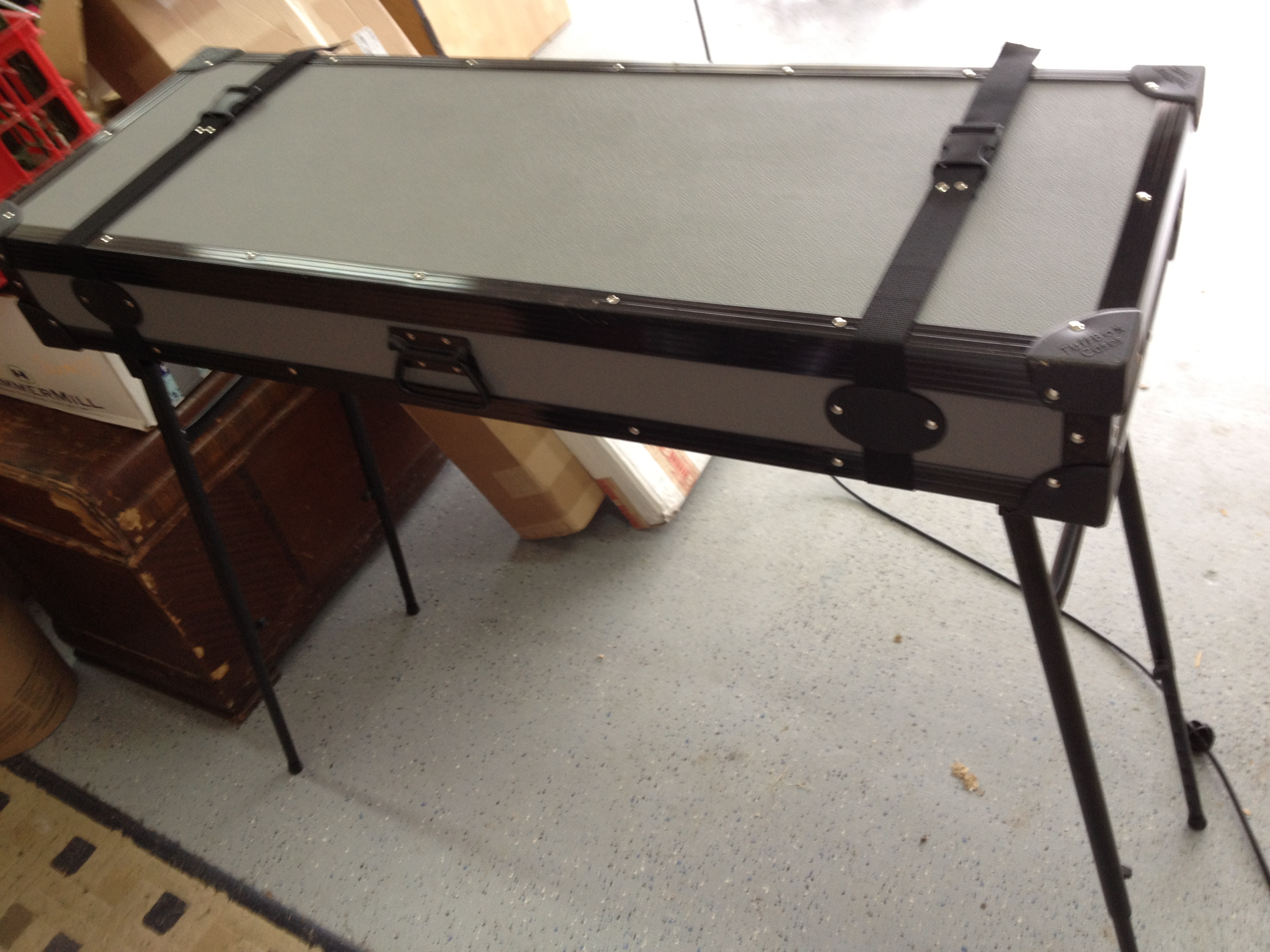