As expected for an undamped, strictly proportional feedback system, it bounces off walls faster & faster until it crashes.  It can't hover stationary, from the reflected IR.  Walls not completely reflective, not completely seemless, or not orthogonal to the sensors are less effective.

To engage the altitude hold, fly above 0.2m & get it to settle into a descent with fixed throttle.  It automatically fixes it at 0.2m.  It seems to work over carpet.

Any reflected sunlight pushes it away from a long distance.  The feedback makes it harder to fly manually, as the ever changing sensor angles & reflectivity of the walls constantly create random amounts of unbalancing.  It uses a 600mAh battery, a new record for a copter this small.  The increased weight destroys the propellers in crashes a lot faster than the old Ladybird.

The amount of site preparation to get the perfect reflections & lack of any damping show why IR hasn't taken the job of localization from optical flow.  It's easier to lay down a reflective floor than set up perfect walls. 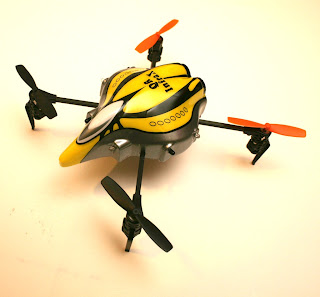 It does have longer landing gear than the Ladybird, probably to meet the clearance requirement for sonar to initialize. 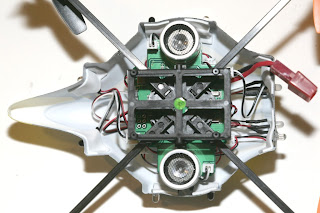 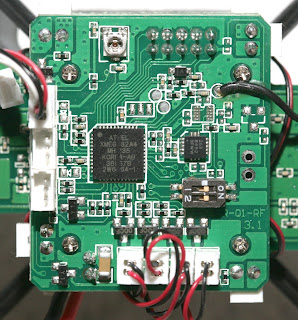 All the IR sensing, flight control, & radio is on 1 board, complete with MOSFETs, snubber diodes, extra space for the LED headers, an extra connector for the flashing LEDs.  It has a pot for adjusting the heading sensitivity, but it's too much work to unplug all 8 IR connectors to get to this board. 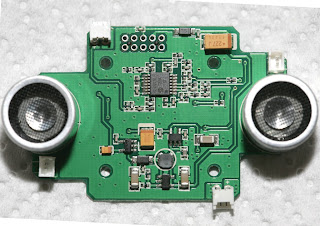 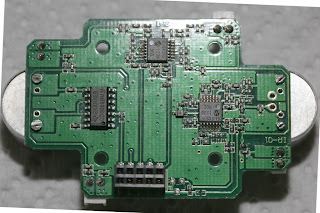 A TI CD4069 hex inverter drives 1 transducer.  A bag of  Microchip 6L04 op-amps amplify the other transducer.  The mane atmel controls everything.  This board has headers for the IR receivers, so some of the op-amps probably go to IR. 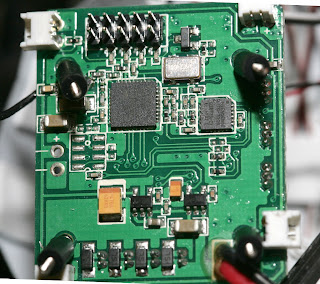 Standard Cypress radio & Invensense gyro, with rubber shock absorbers.  This board has headers for the IR emitters.  Whether or not it was intended, all the noisy motor power is on this board, while the IR & sonar amplifiers are on the other board. 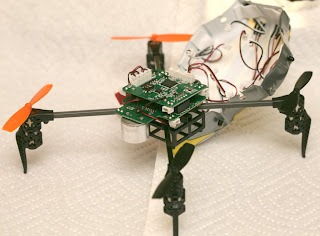 Anyways, looking at how it was manufactured, each LED & photodiode painstakingly taped down by hand & connected with its own JST connector into a tiny nest of 16 wires, someone with a lot of power & labor at his disposal decided this was going to work.  He was convincing enough to shift a lot of money to making it.

Meanwhile, the Marcy class aircraft, which have worked better with less site preparation since Jan 2012, have never won any investment.  It's more about how it's sold, rather than how well it works.  Selling it as an experimental model to RC pilots wins them over, but selling it as a machine which can cook toast & fly it into your mouth is going to get you laughed out of China, no matter how much better at being an RC model it is than anything else.

Everyone wants a high volume consumer product, but UAV's are such a high profile product, even the dumbest suits can't be fooled when the current state of flying robot technology doesn't match the sales pitch.

Thumbs up! have a Great Day!

Thank you for the tear-down and write up!

It is always interesting to read of work from the Crossfire Labs.