This forward-swept flying wing concept was inspired by the work of Justin Ammon (EdgeRC / birdofprey) that I spotted on www.rcgroups.com  A period of spreadsheet analysis and messing about with various X-plane simulations over te Christmas/New Year break demonstrated to me that, whilst unlikely to be a walk in the park, a forward swept wing could be made to work and would yield some worthwhile advantages over a mainstream flying wing.

A bunch of CAD work and several iterations later, based on an acceptably flying X-plane model, I came up with this design and I am now committed to bringing it to reality. One of the difficulties with the forward swept design, especially as a pusher, has been to establish a workable centre of gravity position.  This necessitates the use of a protruding fuselage (a deviation from the pure flying wing) but offers an advantage of placing a payload area virtually right on top of the CoG.  Thus the design can accept a wide variation in payload mass and still be (X-plane) flyable.  How this translates into real world usefulness is yet to be seen, but it bodes well.

The drag-based yaw stablity of a conventionally swept wing also no longer works with a forward swept design, so the addition of a vertical stabiliser fin is required.  Bad for stealth, I know! 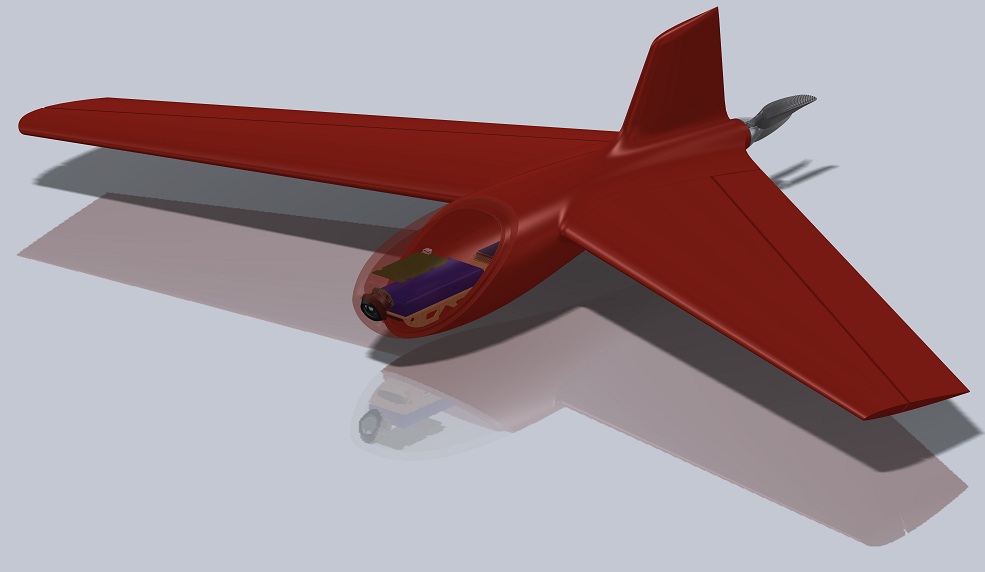 The nose cone has been sliced off at an angle to yield a removable camera pod as well as a large access aperture for working on the interior of the airframe.  I am designing in a removeable avionics tray so that the majority of the avionics and payload can be mounted on a lightweight demountable chassis to aid bench testing, modification and repair. The location of the battery at just ahead of the CoG will allow me to increase its capacity with minimal adjustment to balance.   It is also is attached to the avionics tray for ease of complete systems-level bench-testing.

Personally, one of the attractions of the forward swept wing is that, similar to a canard design, all of the wing surface is lifting to produce pitch stability.  The lift distribution isn't the most theoretically efficient, but at higher speeds and lower C_L, this is not such a huge penalty.  The X-plane simulation shows a best L/D of about 19:1, which is not so bad for such a stumpy, low aspect ratio craft.  My earlier HDwing designs didn't get this far and they had the advantage of winglets and a lift distribution closer to the theoretical optimum.

The forward swept wing layout does come with some compromises but also offers compensatory advantages to exploit.  There is a whole host of detail design work to be done, but hopefully a worthwhile UAV airframe will result.  Time will tell.