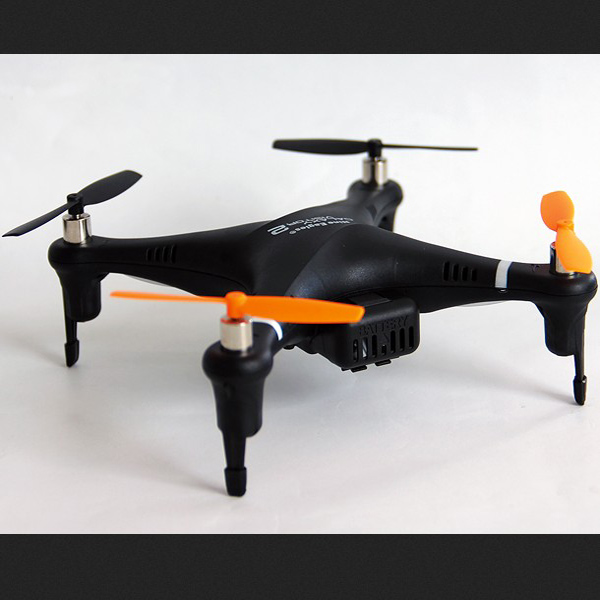 Meet the Nine Eagles Galaxy Visitor 2. This little quad, which looks an awful lot like a mini-DJI Phantom, actually carries some pretty impressive features for the size and price.

I have applied my own personal translation to the specs, as well as get some additional information from sources, and will share my findings.

Two of the coolest features in this 4 inch quad are the heading lock feature, and the follow-me feature.

The first feature allows this quad to be flown with directional continuity. This is similar to the, "headfree," or, "carefree," modes found on larger quads. In short, the cyclic stick will always move the quad in the same direction no matter the yaw of the aircraft. Forward goes forward, sideways goes sideways, and back goes back, no matter which way the quad is actually facing. This can be turned off and on I am told, though I haven't confirmed if this can be done, literally, on the fly. Either way, in a micro-quad, this is a HUGE addition, in my opinion.

The second cool feature, follow-me, allows the quad to follow the transmitter as the pilot moves. While this quad can be used with other controllers, I am told the provided controller is what the quad locks onto for this feature. Building on the follow me feature, the quad also has a return to pilot function. In short, you stand still and it follows the transmitter to where you are standing. While these features aren't done in the same way as the bigger quads, which use GPS, they are still pretty cool for a $100 quad!

This quad also comes with a camera, which I have been told can shoot video at 720p HD.

I have been advocating for small consumer grade quads with features of the bigger guys, and have been researching building my own. The more I research, the more I come to realize there is already someone pulling it off cheaper across the Pacific. I have owned several Nine Eagles products, and found them to be relatively reliable, but I would love to see a similarly sized higher quality build come from one of the more major players in the UAS field. If it could be done for around $500, with higher quality components, and a great support network, I think there could be a significant market.