Thanks to the Dev team for getting ACv2.9 to us, especially as it fixes a lot of features that have been broken for a while. This one in particular is one that I had been trying to get to work - http://diydrones.com/forum/topics/automated-parachute-drop.

The mission was to takeoff to 2m altitude, fly to WP2 @ 25m alt, drop the chute, fly to WP4 to a) stay out of the chutes way and b) not yaw towards home hopefully to capture the chute while it fell with the 808 #16v2 keychain camera attached to one 'copter foot, then descend to WP5 @ 5m and land.

Some of the flight was a little wobbly as I had adjusted a few PID settings yesterday while experimenting with something else. Below is how the mission looked. The setup was followed as per the camera control wiki page > shutter configuration - http://code.google.com/p/arducopter/wiki/AC2_Camera. A simple 5 gram servo released a rubber band holding the chute underneath the 'copter. 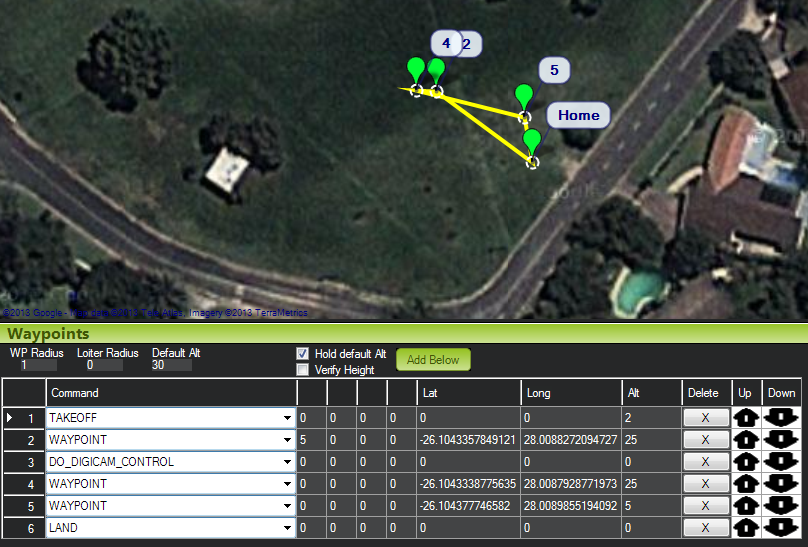 I had to change the nav speed to 2m/s because the waypoint was very close to the takeoff point and that was still too fast as the 'copter had reached the waypoint before the 25m altitude had been reached.

Waypoint radius was set to 1m and I had turned AUTO_VELZ_MAX to 150cm/s from 125cm/s but that also made the takeoff very/too rapid.