It’s a land rush in the air.

Jordi Munoz Bardales is one of a handful of San Diego entrepreneurs staking out new territory in the rapidly commercializing field of unmanned aviation.

Munoz, 25, is CEO of 3D Robotics Inc. Working out of a Kearny Mesa business park, his enterprise produces and sells components for model-size unmanned aircraft, providing them to hobbyists, college engineering programs and other entrepreneurs.

Its specialty is autopilot electronics.

Early in the venture, Munoz said, he saw that he might be onto something when he assembled 40 autopilots and sold them in a single day. “I realized I had a business here,” Munoz said. 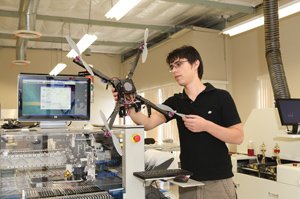 He said he also tries to make everything he sells as inexpensive as possible.

It’s a long way from 2007 and 2008, when Munoz disassembled components from a Nintendo Wii and integrated them into a model helicopter, making a drone of his own. He posted updates to the project on the Internet, including the code he wrote. The work attracted notice from Chris Anderson, editor in chief of New York-based Wired Magazine and author of “The Long Tail: Why the Future of Business Is Selling Less of More.” Anderson sent him $100 and a note of encouragement. Today, Anderson and Munoz are 50 percent owners of 3D Robotics.

3D Robotics has left garage and bedroom quarters in favor of 10,000 square feet of industrial space. The firm has 20 employees in San Diego and six in Tijuana, and relies on 20 software developers worldwide. It has three jobs open.

Its building houses specialized machines that churn out ArduPilot autopilots, which fit on purple circuit boards the size of business cards. Munoz said he would like to buy a second pick-and-place machine to mount components to circuit boards, and locate it in Tijuana. Eventually, he said, he would like to put most of his production in Mexico, while keeping the engineering team in the United States.

A few corrections: Wired is based in San Francisco, not New York. 3D Robotics does not operate DIY Drones, I do (personally -- it's not a company). And 3D Robotics already has a second pick-and-place machine for the Tijuana production line.