It's hard to get accurate, up-to-date and comprehensive statistics on the drone industry, but Quartz has done an admirable job of looking at the US government import data:

There is no comprehensive way to track the precise volume and value of drones imported to the US. Consumer drones are hard to track in trade figures because they can be classified as toys or even as video cameras by customs officials.

However, we do know that through October 2015, US buyers brought in at least 24,070 helicopters weighing less than 998 kg (2200 lbs) this year, according to US Census Bureau data. That’s up 14% from the same period last year.

Most drones weigh significantly less than 998 kg (many less than 1 kg), so this category of goods is broader than just unmanned helicopters (or quadricopters or helicopters), and includes certain light, manned helicopters. However, small consumer and commercial drones likely make a significant part of it, as the average price of the goods imported under this category has dropped to levels far below that of even the cheapest manned craft. As you can seen in the chart above, the average price of goods imported under this heading have historically been measured in hundreds of thousands of dollars. Prices, as shown in a detail below, have dropped to around $1,000. 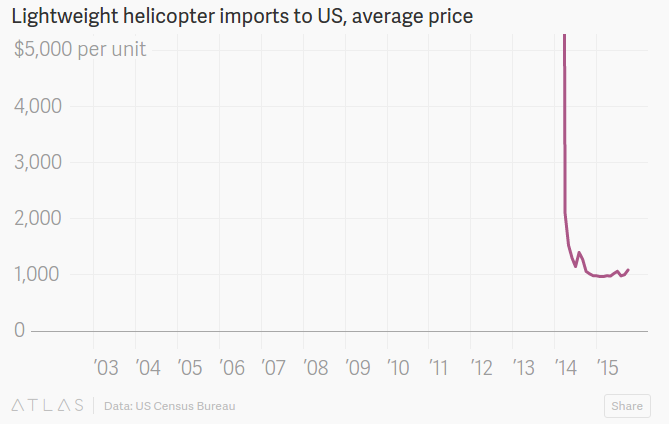 Venture capital firm Kleiner Perkins Caufield and Byers estimated global drone shipments will hit about 4.3 million units in 2015, up from 1.6 million in 2014. The firm also estimated that 35% of consumer drone revenue worldwide comes from the US.