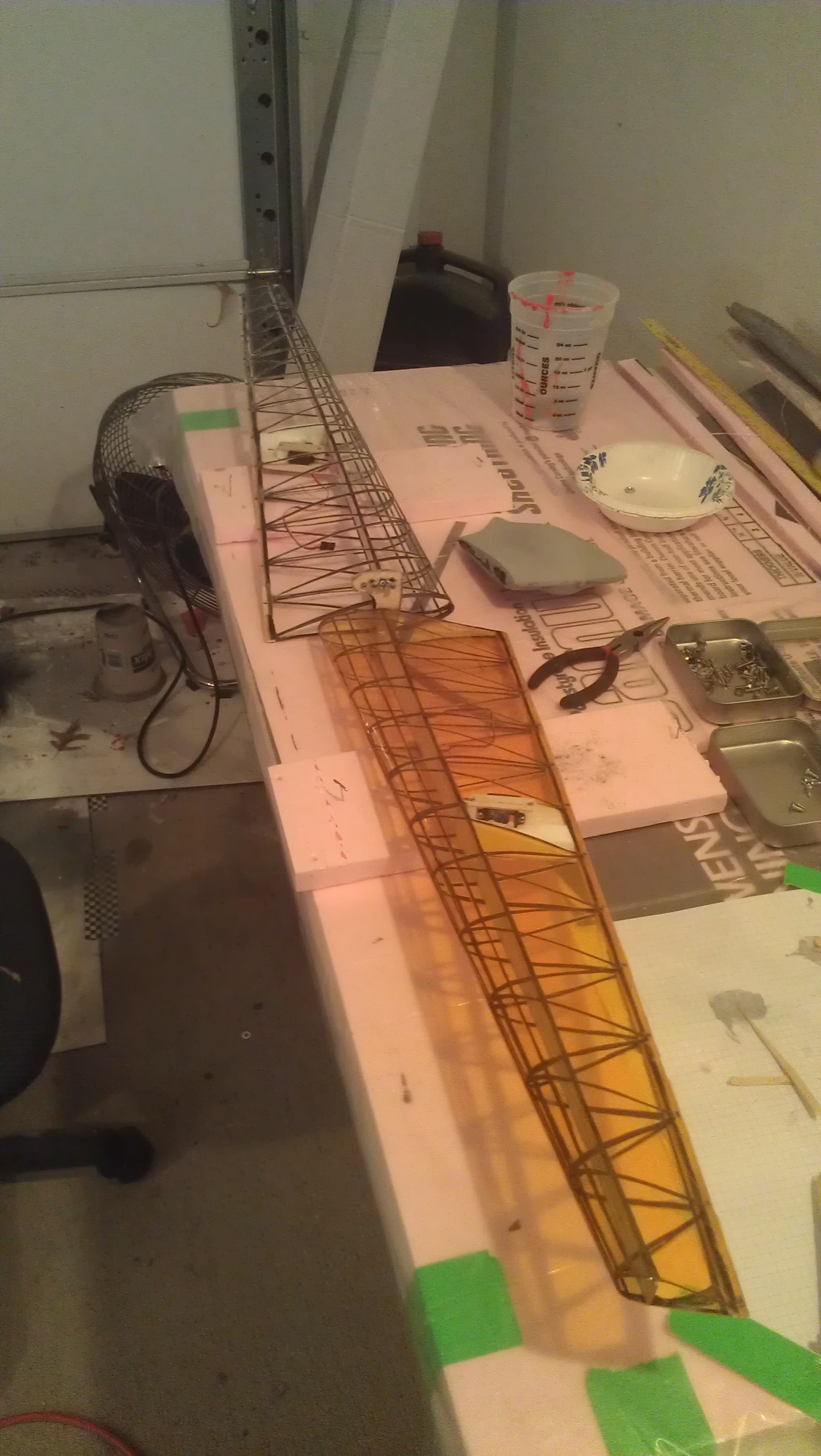 The first day of testing is complete. I noted several flaws inherent in the design as well as a few ideas for making the vehicle stronger, lighter, and easier to build. There are a lot of changes that need to occur.

1) After completing the airframe I noticed that some of the materials were not strong enough to hold the fastener heads from pulling through (depron). I reinforced the parts with epoxy and re-drilled them to add bearing strength.

2) The airframe is a bit heavier than I wanted. I think this is due to the center spar being carbon laminates with balsa. there is a lot of excess glue in the mix which could be eliminated by making the spar a single ply of carbon with tow on the upper and lower cap for stiffness.

3) The way the wings join in this test model was waaaayy overbuilt. I figured that since it was the center spar joiner that it has to be as strong as the wing, but it only needs to carry load from one spar to the other. I think i can cut the material down by 80% and still have a reliable joint between the wings.

4) A DIYdrones user noted to me that one of the stability issues is that spinning a flying wing causes an oscillation due to the blades not generating an equal amount of lift. This would normally be corrected by having a heavy body down below the rotor to stabilize the vehicle using a low CG. I think the dihedral will compensate for that to some degree. 5) The aft mounted motors were vector thrust controlled to remove the need for elevons (and all control surfaces in general. This may have been a good idea on paper as it increased the responsiveness of the input at low speeds, but it has some very nasty stability effects on the vehicle in VTOL mode. That whole section will have to be redesigned. I think I can fix the issue by mounting the engines forward of the wing and extending the elevons aft using a nacelle structure off the motors. This will give me support, stability, and a good mounting point for the servo. Win, win, win.

6) The mesh structure was sufficient but there was some FWD-AFT bending in the wing since there were no ribs to keep the aft trailing edge form becoming compressed into the spar. I will change the mesh design a little to add stiffness along the chord direction as well as include a few fwd/aft stiffening members at the root, nacelle, and tip.

7) I may have over estimated the amount of Electric Speed Controller (ESC) I needed. I am using two small motors, and two ESCs. I purchased 30A ESCs, but that was way overkill. I have 8A ESCs coming from hobbyking now.

The new design is below. In theory this should offer enough stability to solve my VTOL issues. In practice, I may need a gyro to actually make it work the way I want. The new wings went together in a snap. Thank you auto-winder!