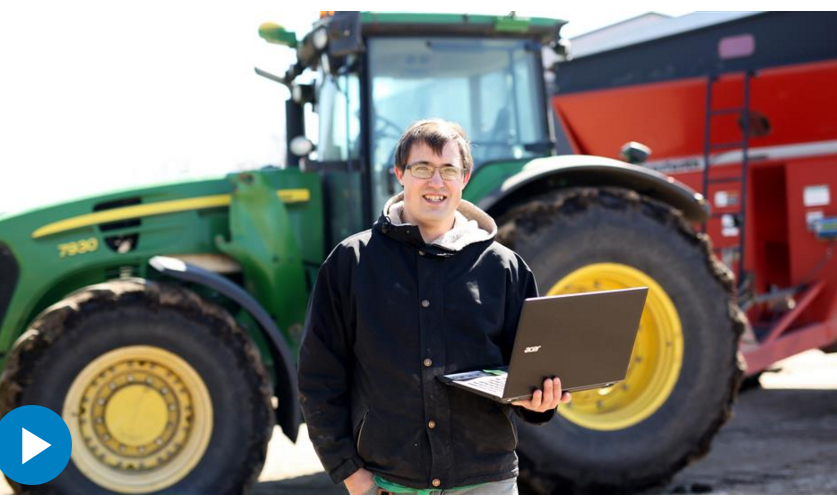 Go Matthew! I just wish the WSJ had actually linked to your project or given any additional info at all. Here, let me help you with that.

From the WSJ article:

The green tractor trundling across a Manitoba field with an empty cab looks like it’s on a collision course with Matt Reimer’s combine—until it neatly turns to pull alongside so he can pour freshly harvested wheat into its trailer.

The robot tractor isn’t a prototype or top-of-the-line showpiece. It’s an eight-year-old John Deere that the 30-year-old Mr. Reimer modified with drone parts, open-source software and a Microsoft Corp. tablet. All told, those items cost him around $8,000. He said that’s about how much he saved on wages for drivers helping with last year’s harvest.

Mr. Reimer’s alterations, which he hopes to replicate for other farmers this year, are part of a technology revolution sweeping North America’s breadbasket. Farmers, many of them self-taught, are building their own robotic equipment, satellite-navigation networks and mobile applications, moving their tinkering projects out of machine sheds and behind a computer screen.

This homespun hacking—which sometimes leapfrogs innovations by big equipment companies like Deere & Co. and navigation specialists like Trimble Navigation Ltd.—reflects dwindling farm incomes, the low price of electronic hardware and, sometimes, off-season boredom. Such projects could eventually compete for farmers’ dollars in the farm-technology market, which generates an estimated $2 billion in annual sales, according to data and research firm IBISWorld.

“Even if they release [autonomous tractors] next year, it’s probably going to be 15 years before that technology trickles down to every farm,” said Mr. Reimer, referring to the big farm-equipment companies. What’s more, his version would be “a lot cheaper than if somebody’s got five to 10 engineers working full-time on something like this,” he said. He added that his system doesn’t require altering Deere’s own software or coding.

The engineering-school dropout says he picked up programming from online forums and coursework archived on the Massachusetts Institute of Technology’s website, though he said he didn’t complete that program either.

Technology is already firmly rooted in modern farming, allowing a shrinking number of farmers to oversee more acres. Advances like auto-steering tractors have freed some farmers to trade futures contracts and gripe about the weather on their smartphones from inside a tractor cab, pausing only to turn and stop their machines. Defectors from Silicon Valley powerhouses like Google Inc. and Yahoo Inc. are building software to analyze soil and manage fertilizer use.

A three-year slump in major crop prices, however, threatens the big bet on farm technology by companies like Deere, Monsanto Co. and DuPont Co., which have sunk hundreds of millions of dollars into precision-guided planters and algorithm-powered advice on managing crops—plus cloud-based systems to manage the data. Sliding prices for everything from meat to melons has U.S. net farm income on pace to fall to $54.8 billion this year, down 56% from 2013 and the lowest level since 2002, according to government forecasters.

Kinze Manufacturing Inc., an Iowa-based farm-equipment maker, is working ondriverless tractors, including a system that allows several to load grain on the same field. Kinze continues to invest in the research, but Phil Jennings, service manager at the company, said turning a profit from such cutting-edge machinery gets harder when the price of corn, the most widely grown U.S. crop, is at less than half its summer 2012 peak.

With less money to spend, some farmers say they can build their own tools, suited to their farms, at a lower cost.

“Poverty is the mother of invention,” said Jim Poyzer, 65, who returned to farming six years ago after a few decades in computer programming. During the winter months four years ago Mr. Poyzer began tinkering with a microprocessor, eventually developing a system to monitor and adjust how many seeds his planter places in his fields near Boone, Iowa. The system tailors the flow of seeds to the soil’s ability to produce healthy crops. 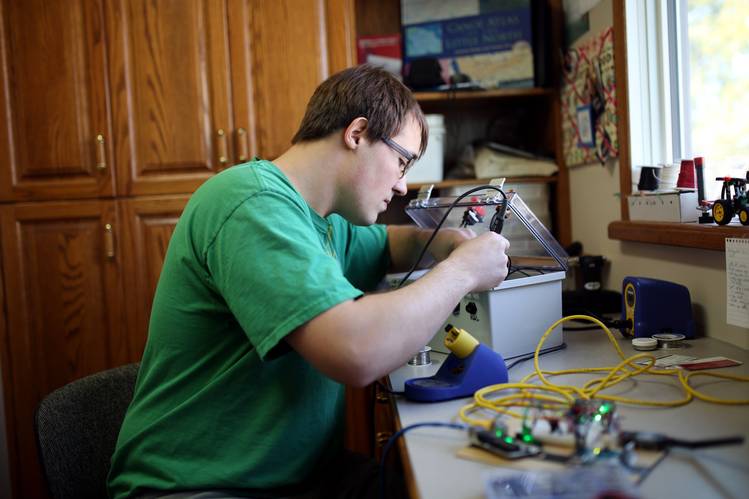 He estimates the system’s cost at about $750, versus commercial versions that retail for around $5,000, and says it helped him save about $1,000 a year on seeds. “That’s not much, but farmers are trying to optimize everything,” he said.

Now, Mr. Poyzer is working on other projects, like a solar-powered sensor to monitor soil temperature that he says could help him get a jump on planting.

Some companies, including Deere, have taken steps to prevent anyone from modifying the software that runs their equipment, and also warn that altering a tractor’s systems could put farmers and workers at risk. Deere uses copyrights and other intellectual-property measures to protect its software.

“We always have producers wanting to build on top of those solutions. I think it’s a great thing,” said Cory Reed, head of Deere’s intelligent solutions group. But when it comes to Deere’s software, Mr. Reed said, “there has to be a limit, both for regulatory safety and for proprietary reasons.

Deere doesn’t object if farmers create their own systems to work with Deere equipment, without altering the company’s embedded software, so long as these meet industry standards, he said.

Some farmers-turned-techies aim to reap profits on their innovations. Dirt Tech, a startup run by two farmers and two software engineers, is developing a range of mobile applications that help map soil fertility across farmers’ fields, or mark rocks to avoid damage to machinery or allow for yanking them out. The Elbow Lake, Minn., company’s apps have been downloaded more than 4,500 times.

“We really enjoy solving these problems,” said Ben Brutlag, a co-founder of the company who raises corn, soybeans and sugar beets near Wendell, Minn. But, he said, “we’re definitely trying to make some better money at it.”