One of the coolest features for the next release of my FlightZoomer apps is a terrain elevation map and a vertical situation display. The look&feel of these features strongly borrow from the VSD (vertical situation display) and the TERRAIN display of the real Boeing 787 (after which FlightZoomer is modelled). The ergonomics, that are developed for professional pilots should be good enough for drone pilots as well!

To see how the changing colors provide excellent situational awareness about the proximity to terrain while flying I strongly recommend to see the video above.

The following explanations provide some interesting background information about these features:

On this picture we see the VSD (Vertical Situation Display):

On this picture we see the Navigation Display with the terrain layer switched on: 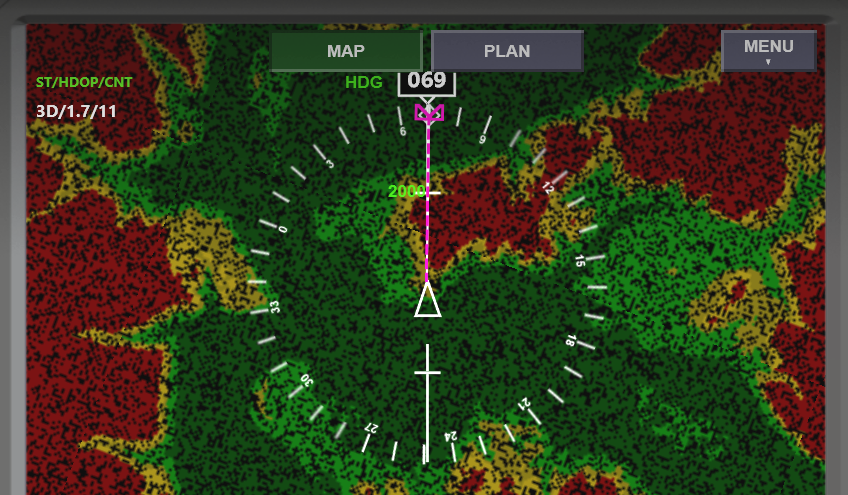 Again the colors have the same meaning as above.

How should yellow terrain be interpreted?

It is perfectly normal and acceptable (actually unavoidable), that the terrain will turn yellow on a final approach. On the other hand yellow terrain poses an increased risk of a CFIT because of obstacles or inaccuracies of the system.

Some more details about the implementation:

And - for those who think "I have no idea what FlightZoomer is all about" - here are some high-level buzzwords about FlightZoomer:

FlightZoomer is distributed avionics suite on top of ArduPilot. It has a companion computer (a smartphone) that is connected via a cell-network-data-bus to a ground station that offers comprehensive instruments, a flight management system and an autopilot. These features allow basically to fly IFR.